Law360 (May 26, 2021, 7:35 PM EDT) -- U.S. authorities are ramping up their Foreign Corrupt Practices Act investigation of Toyota, with federal prosecutors impaneling a grand jury in Texas as they seek any evidence the carmaker bribed top Thai judges to overturn a $350 million tax judgment, according to a U.S. law enforcement official and documents related to the investigation. 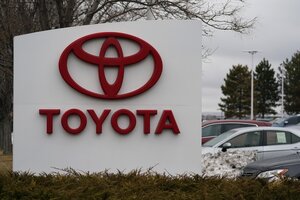 Federal prosecutors have impaneled a grand jury in Texas as they investigate Toyota for potential Foreign Corrupt Practices Act violations, according to a law enforcement official and documents. (AP Photo/David Zalubowski)

According to the law enforcement documents, the ongoing investigations by the U.S. Department of Justice and U.S. Securities and Exchange Commission, which Toyota disclosed in a public filing earlier this year, appear to be premised on the findings of an internal company investigation conducted by WilmerHale. The findings were presented by Debevoise & Plimpton LLP to U.S. authorities in April 2020.

In particular, Toyota suspected senior attorneys for Toyota Motor Thailand, or TMT, may have funneled bribes through a private Thai law firm to Thailand Supreme Court judges in an effort to influence the decision on a still-pending appeal of the tax judgment, according to sources familiar with the matter and documents describing the company's inquiry.

The grand jury was impaneled as part of the investigation in the Northern District of Texas, which encompasses Dallas, near Toyota's U.S. headquarters, according to the U.S. source. While the proceedings are secret, former DOJ attorneys not involved in the case told Law360 that prosecutors typically use grand juries at this stage of FCPA cases to subpoena bank records and other documents as they investigate possible bribery of foreign officials.

Debevoise and WilmerHale did not respond to a request for comment on Monday.

"Toyota works tirelessly to uphold the highest professional and ethical standards in each country where we operate. We take any allegations of wrongdoing seriously and are committed to ensuring that our business practices comply with all appropriate government regulations," a Toyota spokesperson said. "We are not in a position to share any further comment."

The internal Toyota investigation found that TMT contracted with Annanon Law Office to help establish a backchannel to Thailand's highest ranking judge via a former chief judge and an advisor, law enforcement documents show. TMT paid nearly $18 million on the $27 million contract, according to the documents, with $9 million to be paid if Toyota won the appeal, which relates to import taxes on Prius car parts.

Federal investigators are reportedly now seeking to determine if TMT, either directly or through the Annanon law firm, paid former Supreme Court of Thailand President Direk Ingkaninan and Supreme Court senior advisor Chaiyasit Trachutham to persuade high court president Slaikate Wattanapan to accept Toyota's argument and have the court rule in its favor within a year, sometime after Slaikate's term began in October 2019, according to the U.S. official and documents related to the investigation.

Thai government records indicate that around the time of the alleged bribery scheme Direk was a sitting senior judge and Slaikate was president of the Supreme Court. While the duration of Chaiyasit's alleged tenure as a high court advisor is unclear, records show he was a senior judge on the Court of Appeal for Specialized Cases until at least October 2019.

Annanon was first paid in May 2015 to help with the trial court, or Primary Court, case, according to a Toyota document outlining the protocol for the company's internal investigation at its outset. The document, which was obtained by Law360 and independently verified, also said that "Mr. Direk assisted TMT with the Prius case in the Primary Court and has been involved again in the current possible Supreme Court appeal."

Direk, 70, was the top ranking senior judge on the Supreme Court as of May 2020, government records show, and is eligible to serve until he ages out next September. Records show Chaiyasit, 70, reached mandatory retirement age in September 2020 after various judicial posts on Thailand's appellate and supreme courts. Slaikate, 66, stepped down as Supreme Court president in September 2020, but retained senior judge status.

The long-serving Toyota attorneys who law enforcement documents claim allegedly organized the scheme — General Manager Wichien Hirunmahapol, his deputy Sathit Tungjitpreechatai and Pornchai Saetachantana — left TMT in the midst of Toyota's internal corruption probe and opened a boutique law firm, according to online biographies, the firm's website and sources familiar with that investigation.

A court official confirmed on Monday that Direk and Slaikate remain sitting senior judges on Thailand's Supreme Court but did not immediately confirm Chaiyasit's employment status. He referred Law360 back to an earlier public statement.

Responding to Law360's previous reporting on the Toyota internal investigation, a spokesperson for Thailand's courts issued a two-page statement on April 3 saying that if evidence of judicial bribery is put forward, the judiciary committee "will proceed to investigate and decisively punish such acts that bring disgrace to the honor of the judge, destroy the court's neutrality, and make the society distrust the Thai justice system."

Court of Justice spokesperson Suriyan Hongvilai confirmed at the time that Toyota had appealed the Thai Customs Department tax judgment to the high court. Thailand's Supreme Court has not announced a decision yet.