Like jazz before it, rap music spent several decades moving from the margins to pop culture's center, becoming a global economic and political engine in the process. The genres also share two other important and inextricable qualities: roots in disenfranchised African American communities, and constant targeting by the criminal justice system, say the authors of a new book looking at these roots. 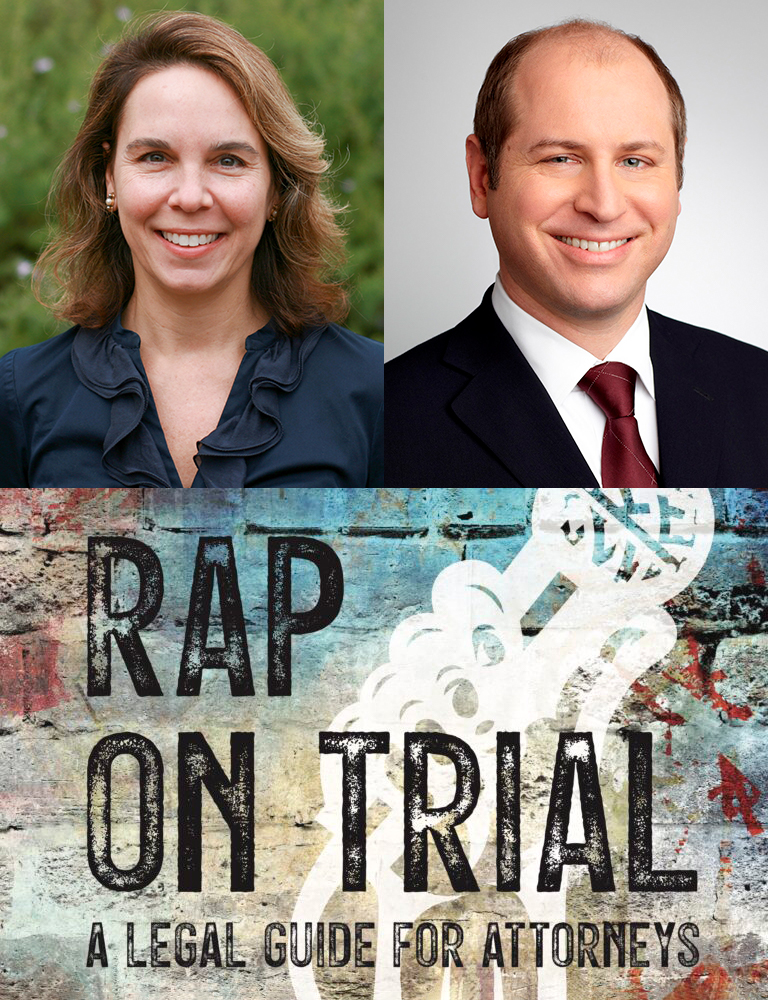 Professors Charis E. Kubrin and Jack I. Lerner of the University of California, Irvine, are the authors of "Rap on Trial: A Legal Guide for Attorneys."

University of California, Irvine, professors Charis E. Kubrin and Jack I. Lerner spotlighted this history in "Rap on Trial: A Legal Guide for Attorneys," a new resource for lawyers encountering a frequent and pernicious example of this targeting: the evidentiary use of rap lyrics in criminal prosecutions. The authors recommended explaining rap's connection to earlier Black narrative art forms as a defense strategy.

"Defense counsel should plan to put rap music in context as part of a long tradition of creative Black expression, which has been subjected to a lengthy history of police scrutiny and harassment," the guide reads.

Besides illuminating legal tactics, "Rap on Trial" also examines the broader history, First Amendment concerns and bias risks that accompany this prosecutorial practice. With an accompanying case compendium and brief bank, the authors illuminate the myriad ways this strategy, also termed "rap on trial," has succeeded and failed. Prominent examples of rappers targeted by law enforcement, from Drakeo the Ruler to Tiny Doo, are offered as road maps for attorneys involved in these cases.

The professors also highlight the lasting impact such prosecution leaves on both the art form, as UCI School of Law clinical professor Lerner recently explained in a Twitter thread, and the disproportionately young, Black and Latino men and boys being prosecuted.

Kubrin, a criminologist at UCI's School of Social Ecology, has researched this issue throughout her career and even filed an amicus brief in 2015's Elonis v. United States, a Supreme Court case about when a threat made on social media constitutes a "true threat" that can be prosecuted. She told Law360 that the U.S. Supreme Court "pretty much sidestepped the role of rap in its decision."

Lead author Lerner linked up with Kubrin after seeing her speak several years ago and finding a shared interest in how the issue of rap on trial illuminates racial justice, freedom of expression and civil liberties concerns. They and students from UCI's Intellectual Property, Arts and Technology Clinic, which Lerner directs, built the guide off of many interviews with defense attorneys involved in such matters.

In separate interviews, the scholars spoke to Law360 about the guide's creation, why rap gets treated differently than other genres despite its ubiquity, case precedents and the future of "Rap on Trial."

Why are we still seeing such prosecution take place even after the Elonis v. U.S. ruling seemingly eliminated rap lyrics as prosecutable?

Kubrin: The Elonis case ends up being sort of not a good representation of your typical rap on trial case. ... In many rap on trial cases, the defendants are actually aspiring rappers who have a body of work; in this case, it was a young man who was expressing his frustrations with his previous relationship via rap lyrics on Facebook. If I remember correctly, the court's decision centered on what constitutes a true threat, like if someone posts lyrics on Facebook that are not directed necessarily at a person because it's just your status, is the communicating of a true threat actually happening in that instance. The fact that they were communicated in the form of lyrics, and that rap was a part of this was really downplayed by the court.

As "Rap on Trial" mentions, rap is far from the only genre with violent lyrics, but it gets invoked as criminal evidence far more than other genres. Country and heavy metal have plenty of violent imagery, and the latter has been prosecuted as incitement before. Simultaneously, Nazi punk and other white power music often feature calls for racist violence that do not face the same prosecution or policing. Why does rap still get this treatment, even as it is now far more mainstream than these other styles?

Kubrin: I think it's not too difficult to figure out why that may be the case when you consider who makes rap, who produces rap, right? If you look at your typical aspiring rapper, at least in the cases I've been involved in, its young men of color, Black and brown men, from poor communities. You've got through intersectionality there: age, race, gender, socioeconomic status coming together uniquely. I think this activates stereotypes, prejudices and biases that people have about this group of people being inherently violent and dangerous. It's a lot easier, I think, in the minds of the average American to think about young Black men that are aspiring rappers doing the stuff that they say that they're doing in their rap lyrics, compared to, say, another group of people for a different genre of music. ... One big change over the years that may have helped increase rap on trial cases involves the increasing use of technology and social media platforms among aspiring rappers to launch their careers. If a rapper is trying to make a big and get an audience, maybe a record deal, they are putting their music out there, they're putting their videos out there, lyrics are freely available. This has not gone unnoticed by law enforcement. In fact, I'm aware of programs, and trainings that involve teaching law enforcement how to [monitor] social media platforms to collect information about rappers that can be later used as evidence in courts.

Lerner: We're still a very segregated country. Even though rap music might be fairly ubiquitous in pop culture, there are still a lot of people that don't necessarily listen to rap, and they also have preconceived notions about rap across the country. Many people say, "I don't like rap, I don't like the way it sounds and I don't like what they talk about. I don't like violence against women, I don't like talk about drugs and gangsters." So as soon as a prosecutor brings in rap and identifies it as rap, they are unlocking or activating anti-rap bias, which often is correlated with, or is a flavor of, anti-Black racism.

What case law informs both defense attorneys and prosecutors on how to handle rap on trial matters?

#RapOnTrial is when prosecutors use rap lyrics unfairly and misleadingly to lock up young men of color. But @cekubrin and I also found that #rapontrial is changing rap itself: rappers know they are being targeted and it affects their work. Read on... 1/https://t.co/LizxC7HRYM

Lerner: There are hundreds of recorded cases where the courts have weighed in on this question of whether rap lyrics can be included. A heavy majority of the cases have allowed the rap lyrics. Some of those cases are really outrageous because they'll say things like, "You can bring in all this terrible stuff that this individual said that makes him look like the worst person in the world if you take what he says literally to show general familiarity with the drug trade." [Conversely], there's a case called U.S. v. Sneed where, I love [how] the court said very dryly, "Rapping about selling drugs does not make it more likely that the defendant Sneed did, in fact, sell drugs." I think that's pretty obvious for anybody who listens to rap music. It's not necessarily obvious to white juries. There is a pretty heavy majority of cases that have allowed this over the last number of years. But then [we have] the State v. Skinner case and a number of other cases, including a pretty important case in California called People v. Coneal, where the courts have [essentially] said, "Pump the brakes here, this stuff is incredibly prejudicial and it's not necessarily probative because this is not people's diaries, this is art, this is poetry, this is creative expression and you cannot take that literally." In a lot of these cases as well, there is ample other evidence. The raps are not necessary to prove the case, they're cumulative. But courts have allowed them — in our view, erroneously, but that case law is out there. However, what we've tried to do is highlight case law that goes the other way.

How do you plan to follow up on the release of this guide? What will you do next?

Lerner: We're going to be working closely with the defense bar across the country to make this guide as practically useful as it can be. We're also going to be expanding the brief bank, case compendium and a lot more resources that could be used. We're really interested, too, in this phenomenon we noticed in putting the guide together, which is not just that somebody raps and they're targeted ... but also rappers saying, "We know the cops are watching, we know we're being targeted," and, in some cases, saying, "We're changing the way that we talk about this stuff, and our world, because of the targeting, surveillance and prosecution that's going on." That's what that Twitter thread was about, and I think there's more to be done there and exposing just how prevalent that is.

Kubrin: Aspiring rappers whose cases I've been involved in, they've left rapping after this because they feel like they can't freely express what they want. They don't want to end up in prison. So it's already had quite a chilling effect on artistic expression, at least among rappers. Where are the hugely successful rappers out there speaking out on this issue? I would love to see more musicians, artists, producers, those in the music industry bringing attention to this.