How A Law Prof Is Training Non-Attys As Immigrant Advocates 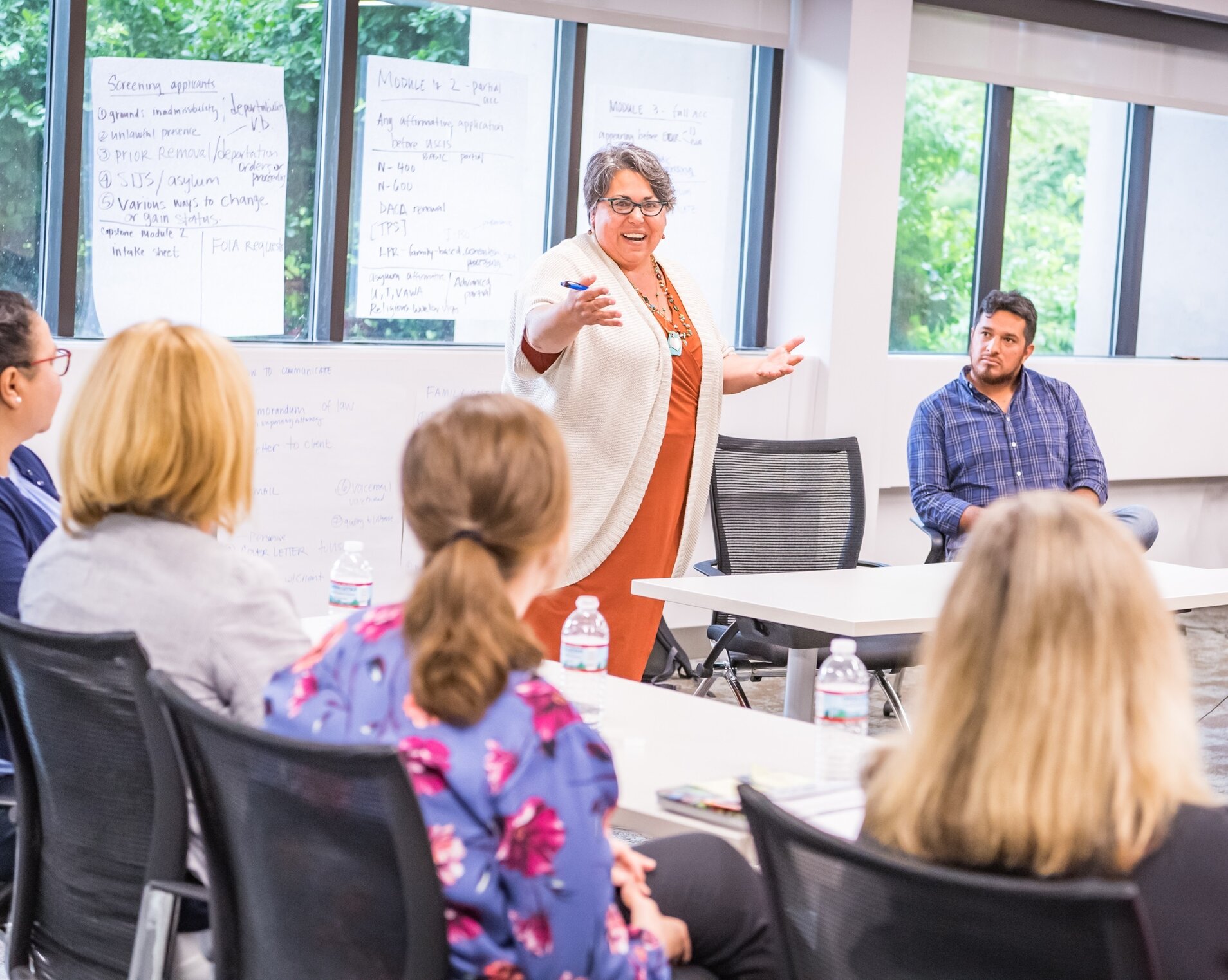 Michele Pistone with a group of faculty designers during the development of the VIISTA program. The group included immigration law professors, advocates and judges.


As a law professor who routinely took her students to immigration courts for field work, Michele R. Pistone was irked to see how many noncitizens went unrepresented. She witnessed similar situations at the U.S. Citizenship and Immigration Services asylum office in Newark, New Jersey, she said.

"We'd always sit there and look around the room and see how many people didn't have a lawyer and know that access to legal representation really is so central in these cases," said Pistone, who has taught for more than 20 years at Villanova University School of Law and led its immigration law clinic.

Pistone told Law360 she got interested in online technology about a decade ago as a way to reach law students across the country, but later saw in it an even greater potential: the school could remotely train nonlawyers, many of them professionals in other fields, to become advocates for immigrants and even represent them in court, helping confront the lack of legal representation.

After obtaining a grant from Villanova, Pistone and a group of faculty designers including lawyers, professors and judges developed the idea into an academic program, now in its third year. The online program, called Villanova's Interdisciplinary Immigrations Studies Training for Advocates — or VIISTA for short — currently enrolls about 90 students from 42 states, with ages ranging from 21 to 85.

"I decided to create an educational program out of a university that would give people a certificate and give them the education that they needed in order to pursue this line of work," Pistone said. "This is a new program, it's very innovative, and as far as I know, there's none other like it."

Federal regulations allow for nonlawyer "accredited representatives" who work for recognized nonprofit, federally tax-exempt organizations to provide legal services in immigration cases. The regulations have been on the books since the 1950s, but they are underutilized, Pistone said.

"Today, there are less than 2,000 accredited representatives nationwide. And yet, we know that six out of every 10 immigrants who go to immigration court face the court system without an advocate, and that the chances of success on the merits are 10 times higher if you have an advocate as opposed to those who don't," she said.

Through VIISTA, which takes a year to complete, students learn critical skills needed to build a case: what needs to be established in court, what evidence is needed, and how to collect it and assemble it into a legal argument with a case theory. They also learn how to work alongside interpreters and interview people in ways that are culturally sensitive and mindful of their traumas.

"They get a lot of practice," Pistone said.

In order to become an accredited immigrant advocate, a person must be affiliated either as a volunteer or as a staff member with a nonprofit organization serving immigrants already recognized by the U.S. Department of Justice.

Cyndy Levy, a 73-year-old retired therapist living in Gwynedd Township, Pennsylvania, north of Philadelphia, completed the VIISTA program in August 2021 while volunteering for nonprofits, one of which she co-founded.

A series of arrests carried out by U.S. Immigration and Customs Enforcement agents in her community in 2017 compelled her and her neighbors to become active in helping immigrants. Together, they formed an organization called Immigrant Rights Action, based in Doylestown, Pennsylvania, and began organizing Know Your Rights training sessions and accompanying immigrants to check-ins with ICE, she told Law360.

Immigrant Rights Action became a nonprofit in January 2019 and was recognized by the DOJ in May 2021.

Through VIISTA, Levy learned the basics of immigration law and skills needed to help noncitizens understand their rights and obtain effective legal assistance.

In addition to her work with Immigrant Rights Action, Levy also volunteers with a national nonprofit called VECINA, where she has helped pro bono lawyers to reunify families separated at the border. In October, she began conducting research about what is happening on the ground in Afghanistan to provide accurate, credible and up-to-date information to support Afghan evacuees' applications for asylum and humanitarian parole, which allows people to be temporarily admitted into the U.S. without a visa to escape danger in their home countries.

Levy is now waiting for the DOJ to give her accreditation, which will allow her to become more involved in helping immigrants. Representing noncitizens before a judge would be "a huge responsibility," she said.

"I don't know whether I will actually, you know, represent someone in court," she said. "There are so many, many other ways that people can provide assistance."

One of those ways is to help lawyers prepare asylum cases, a task that involves thorough research on countries' conditions. Levy's weekly curation of updates on the conditions in Afghanistan are being used by legal aid organizations, immigration attorneys and law schools around the country. The updates are posted on an American Immigration Lawyers Association listserv and shared with Asylos, a European nonprofit supporting asylum, she said.

Another VIISTA student, Shakera Atiq Rahimi, a physician by training who in 2014 came to the U.S. with a special immigrant visa from Afghanistan after working on U.S.-sponsored projects for years, said she wanted to find ways to continue to help people. The U.S. military's withdrawal from Afghanistan at the end of last summer and the evacuation of thousands of people fleeing Taliban rule provided an opportunity for her to get active, she said.

"When more than 70,000 Afghans were airlifted to the United States last summer, I realized that my firsthand understanding of the refugee experience might allow me to be of unique assistance to these newcomers," Rahimi said. "I am very passionate about working for and with refugees."

Rahimi now works at the Afghan Alliance as a coordinator with the Luminus Network for New Americans, a nonprofit based in Maryland. Since January, her organization has helped almost 400 Afghan evacuees resettle in the U.S.

"They have so many needs. But the greatest need is finding ways to get legal representation," she said.

More than 83,000 Afghans have made it to the U.S. as part of an operation called Allies Welcome. As they look for legal paths to stay in the country, experts say nearly half of them have no other choice but to apply for asylum.

But immigration law is complicated, and practicing it is particularly hard when it comes to asylum cases, attorneys say. There are language barriers, it's hard to get evidence to establish a case, and denial rates are high. In addition, asylum seekers often wait in limbo for years as their cases are processed.

Although in most states only lawyers are authorized to provide legal representation, some, including Utah and Minnesota, have recently relaxed their rules to allow paraprofessionals to provide legal services in discrete areas, such as landlord-tenant disputes, debt collection and certain family law matters. In Arizona, paralegals can represent clients in misdemeanor cases where there is no possibility of jail time, as well as in family and small claims court. The main driver behind these changes has been to increase legal representation for people who can't afford to hire lawyers.

Immigration, however, is regulated by the federal government, which decides who can represent noncitizens before immigration judges. Under Title 8 of the Code of Federal Regulations, nonlawyers who have been trained in immigration and practice can sub in for attorneys. The Justice Department says its accreditation program "aims to increase the availability of competent immigration legal representation for low-income and indigent persons, thereby promoting the effective and efficient administration of justice."

Noncitizens don't have a constitutional right to an attorney paid for by the government, but several courts have held that lack of representation harms due process.

According to the Transactional Records Access Clearinghouse, a research institution based at Syracuse University, the current national backlog in immigration court exceeds 1.8 million cases, and the average wait time for each case to clear is two years and three months.

Overall, immigrants are represented in only about half of all the cases currently pending before immigration courts. Representation reaches 67% in cases where there has been at least one hearing adjournment, DOJ statistics show.

Programs like VIISTA could help fill some of that gap, Pistone said, by helping create a new ecosystem of people who can provide legal services. She likened it to the medical field, where nurse practitioners and physician's assistants have been allowed to provide medical assistance.

"This is a moment in time when we have an opportunity to think about new models for the delivery of legal services," Pistone said. "We know that there's an access to justice problem in the country, and lawyers alone aren't going to solve that problem. If they were, we would have solved it already."