Despite Pandemic, Bankruptcy Filings Fell By 21% In FY 2020

By Kevin Penton
Law360 is providing free access to its coronavirus coverage to make sure all members of the legal community have accurate information in this time of uncertainty and change. Use the form below to sign up for any of our weekly newsletters. Signing up for any of our section newsletters will opt you in to the weekly Coronavirus briefing.


Law360 (October 30, 2020, 8:24 PM EDT) -- Business and personal bankruptcy filings in the United States fell by 21.1% during the fiscal year that ended in September, with the federal government speculating that the impact of the coronavirus pandemic has yet to be reflected in the figures, according to statistics released Friday by the Administrative Office of the U.S. Courts.

The total number of bankruptcy filings for the 12-month period that ended on Sept. 30 was 612,561, down from 776,674 filings during the previous 12 months, according to the statistics. 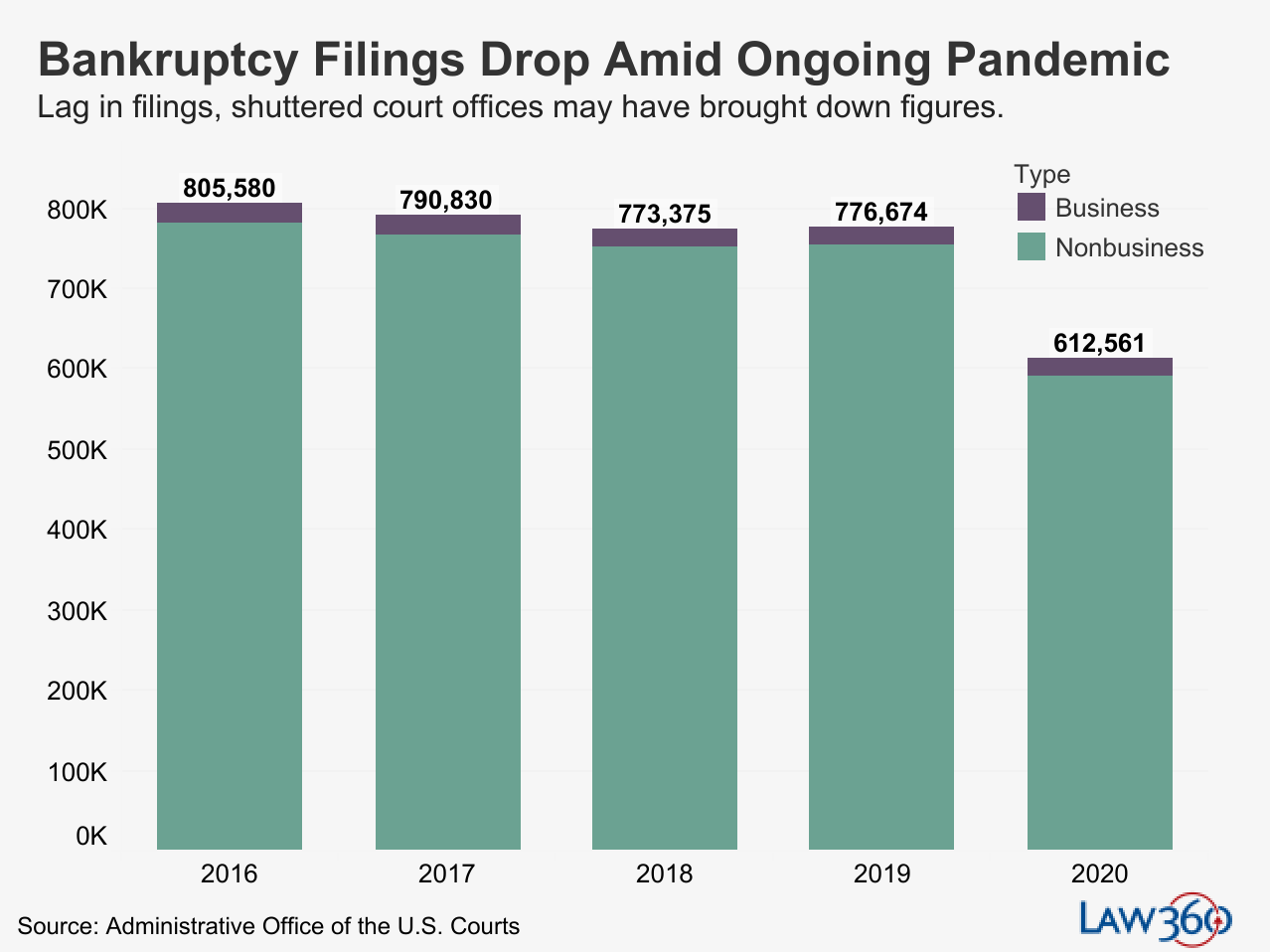 
The drop in non-business filings would appear at first glance to be counterintuitive, given the rise in unemployment numbers in the wake of the COVID-19 pandemic. But the administrative office believes that filings may have been depressed in part by the limits on public access to bankruptcy courts since March, according to its announcement. The worst may still be to come, it said.

"Bankruptcy filings tend to escalate gradually after an economic downturn begins," according to the announcement. "Following the Great Recession, which began in 2007, new filings escalated over a two-year period until they peaked in 2010."

An exception to the decreases were Chapter 11 filings, which increased by 12.3% during the period, to 7,981, according to the statistics.

Law firms in recent months have worked to strengthen their bankruptcy practices and related areas in anticipation of an increase in commercial filings.

Ice Miller LLP on Oct. 1 announced its launching of a distressed investment group geared to assist clients with matters such as acquisitions of struggling companies, investments in bankruptcies and in-court and out-of-court restructurings. The group is made up of existing Ice Miller attorneys, including corporate restructuring, finance, real estate, tax and mergers and acquisitions attorneys.

Also on Oct. 1, Scott Cousins, who had most recently been a director at Delaware-based Bayard PA and who was previously a former partner of Chipman Brown Cicero & Cole LLP,  launched his own bankruptcy-focused law firm called Cousins Law LLC.

The new firm will focus on representing troubled public and private companies, creditors and creditors' committees, boards of directors, management and shareholders in all aspects of business reorganizations, restructurings, workouts and liquidations, including expedited, high-stakes litigation and commercial transactions related to distressed acquisitions and sales inside and outside Chapter 11, the firm's announcement said.

Clarification: This story has been updated to clarify when Scott Cousins left Chipman Brown.