The 'Rocket Docket' Show Goes On Despite Setbacks

By Robert Tata
Law360 is providing free access to its coronavirus coverage to make sure all members of the legal community have accurate information in this time of uncertainty and change. Use the form below to sign up for any of our daily newsletters. Signing up for any of our section newsletters will opt you in to the daily Coronavirus briefing.


Law360 (July 24, 2020, 5:11 PM EDT) -- For 11 straight years, the U.S. District Court for the Eastern District of Virginia "rocket docket" has been the nation's fastest civil trial court. But now, in this already unprecedented year, the EDVA rocket docket — Alexandria, Richmond, Newport News and Norfolk — has been at least temporarily dethroned, finishing in a tie for second by one-tenth of a month behind the U.S. District Court for the Western District of Oklahoma.

Meanwhile, the district copes with COVID-19 as it cautiously presses forward, including with a recent six-week patent trial on the Zoom For Government platform. More details about the rocket docket's evolving COVID-19 procedures follow. 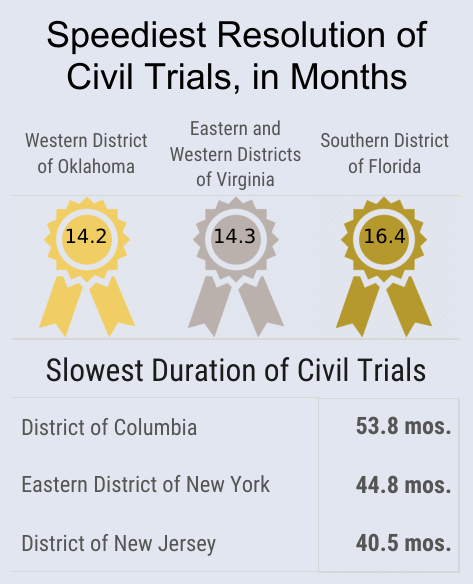 This is our eighth year writing for Law360 regarding the Eastern District rocket docket. In the past, in addition to reporting on the speed to trial, we have highlighted the EDVA local rules (2013), the EDVA "patent wheel," which rotates patent cases filed in other divisions throughout the district (2014), the U.S. Court of Appeals for the Fourth Circuit appellate time intervals (2015), patent and class action cases (2016), what continues to fuel the rocket docket (2017), more about the local practice in the district (2018), and some national comparisons (2019).

For the last few years, we have interviewed one or more of the district judges, sometimes several. We have now interviewed judges in all of the divisions.

The United States Courts' Caseload Statistics Data Tables page allows access to a treasure trove of data. As stated on the webpage: "This section of uscourts.gov provides statistical data on the business of the federal [j]udiciary. Specific publications address the work of the appellate, district, and bankruptcy courts; the probation and pretrial services systems; and other components of the U.S. courts."

We focus here on Data Table C-5, which deals exclusively with civil cases. It includes total numbers of cases, method of disposition, and time intervals to disposition. It breaks down statistics by circuit and district court.

Based on our discussions with EDVA judges over the years, four factors contribute to the district's speedy and efficient docket: (1) prompt, short scheduling orders; (2) rare continuances; (3) active and engaged senior and magistrate judges; and (4) dedication to duty and a pride in efficient docket management.

No doubt, some recent trends are exerting pressure on the trial times in the EDVA. In 2013, the average time to trial was 11.9 months. That number expanded to 14.3 months last year.

Complex patent suits are simply more time-consuming. Many of these are filed in the Alexandria Division (right outside the District of Columbia). To help the Alexandria Division not get overwhelmed, patent cases are rotated through the divisions pursuant to the patent wheel, where such cases are randomly assigned to other divisions. Nonetheless, some judges build more time into the pretrial schedule at the front end to handle a Markman hearing, which contributes to longer times to resolution at trial.

Meanwhile, despite the COVID-19 pandemic, the show has gone on in the EDVA. The court has never shut down. Extraordinary efforts have been made to continue to deliver justice safely and efficiently.

For a period — roughly March through early June — only "critical or emergency criminal or civil matters related to public safety, public health and welfare, and individual liberty" were allowed. All hearings were conducted telephonically or on Zoomgov. Senior Judge Henry Coke Morgan Jr., for instance, handled a six-week Zoom bench patent trial that ran from May 6 until June 25, based on a finding that the case "may have a direct impact on national security," among other findings.

While remote hearings are still encouraged to keep courtroom traffic down, effective June 11, the court allowed judges the discretion to recommence courtroom hearings regarding noncritical or nonemergency proceedings with appropriate precautions. Remote hearings were still encouraged, and sometimes judges will address hearings electronically from the courtroom or on videoconference. It is not always obvious where the judge is physically located during remote hearings as he or she likely will be robed and even have the court's seal superimposed in the background in his or her home office.

At this time, both in-person and remote bench trials are allowed. And while civil jury trials are still postponed, the court has issued General Order 2020-19, which allows the resumption of criminal jury trials on Sept. 14. Extensive precautions will include masks, social distancing, Plexiglas, specially sanitized heating, ventilating and air conditioning filters, following recommendations of an epidemiologist, and many others.

For instance, in order to try one criminal case in Norfolk, three courtrooms on the first floor of the courthouse will be used. The trial itself will take place in the ceremonial courtroom, with the jurors in what ordinarily is the public gallery seated at least 6 feet apart with masks. A second courtroom will be used for the jurors to assemble, and a third courtroom will offer a video feed for spectators.[1]

For the last 11 years, the Eastern District of Virginia rocket docket has been the fastest civil trial court in the land. This year it slipped a bit into a tie for second among the nation's 94 district courts. Still, the EDVA rocket docket resolves civil trials at almost twice the speed of the average district court nationally. Meanwhile, this court has moved swiftly to adapt to COVID-19 and responsibly continue to dispense justice in a safe and efficient manner.


Robert M. Tata is a partner at Hunton Andrews Kurth LLP and managing partner of the firm's Norfolk, Virginia, office.

[1] Much more detail is included in the EDVA Coronavirus (COVID-19) Guidance at http://www.vaed.uscourts.gov/covid-19.html.