By Richard Crump
Law360 is providing free access to its coronavirus coverage to make sure all members of the legal community have accurate information in this time of uncertainty and change. Use the form below to sign up for any of our daily newsletters. Signing up for any of our section newsletters will opt you in to the daily Coronavirus briefing.


Law360, London (March 23, 2020, 6:06 PM GMT) -- Julian Assange, the WikiLeaks founder fighting extradition to the U.S. on espionage and computer misuse charges, will apply for bail because of concerns he is vulnerable to the coronavirus outbreak in the London prison where he is on remand, his representatives said Monday. 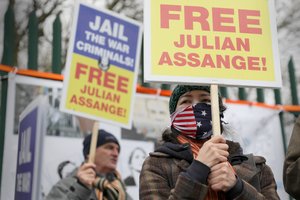 Protestors demand the release of Julian Assange outside a London courthouse on Feb. 26. Assange’s representatives said Monday the WikiLeaks founder will apply for bail due to concerns over the novel coronavirus. (Getty)

Assange is seeking release from Belmarsh prison in southeast London on an extradition warrant over leaking hundreds of thousands of classified documents covering U.S. conduct in the Iraq and Afghanistan wars and State Department cables and files containing assessments of detainees at Guantanamo Bay.

Assange’s lawyers will make a bail application at Westminster Magistrates Court on Wednesday after prison bosses warned there will be deaths in U.K. prisons, which are considered as epicenters for the spread of COVID-19 because of overcrowding and the propensity of the virus to spread in closed places.

The U.K. Prison Officers' Association has likened the infection risk in U.K. prisons to that of cruise ships, while former chief inspector of prisons Nick Hardwick has also called for low-risk prisoners to be released, according to Assange’s spokesman.

“Julian Assange falls into a category of persons who should be released to mitigate the impact of COVID-19 under the recommendations of independent legal charity the Prison Advisory Service,” the spokesman said.

The Australian national was imprisoned for skipping bail after taking refuge in the Ecuadorian Embassy in London as he sought to avoid extradition to the U.S. Assange was evicted from the embassy in April and immediately arrested.

Assange is wanted in the U.S. to face 17 charges of breaches of the Espionage Act and one of computer misuse that could see him given a sentence of up to 175 years in a U.S. prison. A full extradition hearing is due to be held in May following a five-day preliminary hearing in February.

U.S. prosecutors alleged at the preliminary hearing that Assange put the lives of U.S. informants in Iraq and Afghanistan in danger when WikiLeaks published a cache of 250,000 unredacted secret diplomatic cables online in 2011.

Assange had knowingly endangered individuals who had given information to the U.S. and its allies to the risk of torture and death in countries operated by oppressive regimes, prosecutors claimed.

He is accused of encouraging leaks by former U.S. army intelligence analyst Chelsea Manning and of conspiring to hack into the U.S. Department of Defense computer system, in what the U.S. government insists is one of the largest compromises of classified information in U.S. history.

Assange’s defense attorney described the case as being built on “lies, lies and more lies” at the hearing, claiming the request to extradite Assange “boldly and brazenly” misrepresented the facts.

Extraditing Assange would be illegal because the charges are "purely political," his lawyers said at the hearing, arguing that the Anglo-U.S. extradition treaty expressly prohibits extradition for political offenses.

His lawyers also claimed that a Republican acting on behalf of President Donald Trump visited Assange in the Ecuadorian embassy in August 2017 and offered him the possibility of a full pardon in exchange for Assange helping Trump with the investigation into Russian interference in the 2016 U.S. election.

The case is United States of America v. Assange, case number U20200010, in Woolwich Crown Court.

Correction: An earlier version of this article misstated the stage the Swedish investigation into Assange had reached. The error has been corrected.