By Joseph Boris
Law360 is providing free access to its coronavirus coverage to make sure all members of the legal community have accurate information in this time of uncertainty and change. Use the form below to sign up for any of our weekly newsletters. Signing up for any of our section newsletters will opt you in to the weekly Coronavirus briefing. 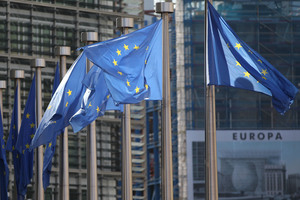 Members of the bloc reportedly lose more than $17 billion a year in corporate income tax from U.S. companies that abuse EU laws. (AP)

EU members annually lose more than $17 billion in corporate income tax from U.S. companies that abuse bloc laws to shift their profits into the U.K., Switzerland and Luxembourg, according to the Tax Justice Network. That sum is in addition to $10 billion in corporate taxes the EU is losing to the Netherlands each year, which the group previously discussed in an April 8 report.

The London-based group has labeled the four tax havens, where effective tax rates range from a high of 10% to as low as 0.8%, the "axis of tax avoidance." Its earlier report analyzed country-by-country data disclosed by U.S.-based multinational companies about where they declared costs and profits in 2016 and 2017. The new report further analyzes that data.

The findings come as the EU urgently attempts to address the risks corporate tax havens impose on measures to tackle the pandemic's health and economic fallout. Three bloc countries — Denmark, Poland and France — have banned domestic businesses registered in tax havens from receiving bailouts from their governments.

"The coronavirus pandemic has exposed the grave costs of an international tax system programmed to prioritize the interest of corporate giants over the needs of people," Alex Cobham, CEO of the Tax Justice Network, said in a statement.

He said the U.K., Switzerland, Luxembourg and the Netherlands had "fueled a race to the bottom, handing over wealth and power in the EU to the biggest corporations and taking it away from the nurses and public service workers risking their lives today to protect ours."

Cobham said the outbreak has heightened the need for EU countries to "reprogram" their tax systems to prioritize the well-being of residents over the interests of rich corporations. "That starts with transparency," he stated, explaining that EU-based multinationals pose an even bigger challenge than their U.S. counterparts because they have lobbied to prevent their country-by-country reporting from becoming public.

The Tax Justice Network, Cobham said, is urging Europeans to press their elected national and EU representatives for tax transparency. A German health care company or a Portuguese supermarket chain should want to show that it's paying the right amount of tax in countries where it makes money and not shifting profits to EU tax havens, he said.

Warning that the post-pandemic EU economy can't be rebuilt atop a "tax haven trapdoor," the report urged bloc governments to ensure bailout money doesn't go to companies that register in any jurisdiction where they pay very low or no taxes. Instead, rescue packages should be predicated on helping businesses that fulfill obligations to the countries where they operate, the report said.

Other advocacy groups have also called on the 27-nation EU to target tax avoidance involving tax havens within its territory, beyond the bloc's "blacklist" of problem tax jurisdictions offshore. So far, the Polish, Danish and French bailout restrictions appear to target only the latter — an approach that tax-fairness groups say is arbitrary and incomplete.

The Tax Justice Network recommended three steps the EU could take to end abuses of its own corporate tax havens.

First, the bloc could enact a form of unitary taxation known as the Common Consolidated Corporate Tax Base. This would make profit-shifting into tax havens obsolete because a corporation would have to pay tax based on where it employed workers to generate profit instead of where the profit was ultimately declared.

Second, adopting an EU-wide minimum corporate tax rate of 25% or above would remove most incentives for profit-shifting, while an excess-profits tax of 50% or 75% during the pandemic would ensure that companies making profits from the crisis are sharing them fully with the countries where they're derived from.

Finally, the introduction of public country-by-country reporting would ensure transparency for multinationals and member countries alike, and create accountability for any continued shifting.

In addition, the report recommended a five-step "bail or bailout" test to clarify uncertainty over how governments can determine which companies are discreetly using tax havens to pay less tax, following the bans in Denmark, Poland and France.

Some light was shed on that last question by a spokeswoman for the European Commission, the EU's executive branch, who affirmed that current rules allow member countries to block pandemic aid from going to companies based in tax havens.

"It is up to member states to decide if they wish to grant state aid and to design measures in line with EU rules and their policy objectives, such as to prevent fraud and tax evasion or aggressive avoidance," the spokeswoman told Law360.

She added that EU countries "can introduce additional criteria, such as the exclusion of companies operating in certain specific sectors, companies based in tax havens (as defined by the relevant EU legislation) and companies with a long-term debt with the national tax authority."

These jurisdictions, however, must also comply with EU rules on the free movement of capital, which state they "cannot exclude companies from aid schemes on the basis of headquarters or tax residency in a different EU country."

Paolo Gentiloni, the EU's top tax official, said Monday that the commission in June would present a tax action plan that is a crucial step to strengthen the fight against tax fraud. The plan will include efforts to deter use of tax havens and promote transparency, Gentiloni told a hearing of the European Parliament.