Law360, London (March 9, 2021, 7:03 PM GMT) -- The COVID-19 pandemic has exacerbated the already-long backlog of unheard cases in England's criminal justice system and exposed the crumbling state of the country's court infrastructure, which lawyers warn will have grave consequences for the administration of justice. 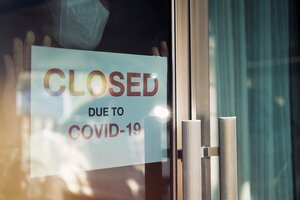 Social distancing measures imposed on the courts have caused the criminal case backlog to swell to its highest number since 2014. (iStock)

Social distancing restrictions imposed on the courts in the 12 months since the country first locked down on March 23 have caused the criminal case backlog to balloon to 56,000 cases — the highest number since 2014 — which is having a damaging ripple effect across all areas of criminal justice.

"That is going to have a really significant effect going forward and tackling the backlog is going to be a pressing issue beyond the health emergency," said Derek Sweeting QC, the chair of the Bar Council, which represents barristers in England and Wales. "It has been a real emergency for justice as well."

Four watchdogs covering the police, prosecutors, prisons and probation in January raised "grave concerns" about the impact of the backlog. They warned in a joint report that it "constitutes the greatest threat to the proper operation of the criminal justice system."

But even before the pandemic struck, the criminal justice system was laboring under the weight of more than 37,000 outstanding cases at the end of 2019. According to Ministry of Justice figures, the number of crown court cases is now 44% higher than it was in February 2020.

"The claim that the pandemic caused the current court backlog is misleading. The root cause of the problem is the chronic underfunding of our criminal justice system over decades," said Peter Csemiczky, a serious crime partner at Hickman and Rose Solicitors. "Cuts right across the board have crippled the system. The pandemic is just the straw that broke the camel's back."

At the onset of the outbreak, the criminal justice system ground to a halt. Jury trials were suspended, and court buildings were closed until hearings could take place safely in the buildings, which often have cramped conditions, without endangering public health.

But capacity is still far from returning to normal. Only 290 out of the 410 courtrooms available across the crown courts have been deemed safe to hold jury trials. Many existing courts — some of which are old Victorian buildings — are not designed for social distancing among the jury members, lawyers, judge, clerks and members of the press and public often needed to hold a trial.

"The criminal justice system has been woefully underfunded and neglected. The physical fabric of the courts is literally falling apart and that is a major problem when you are dealing with a 50,000-case backlog  with pandemic restrictions to handle as well," said Peter Binning, a criminal defense attorney at Corker Binning.

In an effort to rapidly boost capacity, the government has established 36 temporary Nightingale courtrooms — increasing to 60 by the end of March 2021. Other steps include installing plexiglass dividers and holding large cases across two courtrooms with a video link to ensure that jury trials can proceed.

Coined from the name given to temporary hospitals established to treat the surge in patients caused by the pandemic, the Nightingale courts have repurposed everything from theaters to a medieval knights' chamber to the MOJ's headquarters.

While clearly necessary, Csemiczky said they only "paper over the cracks" in court capacity caused by crown court beings being sold off by the government.

For example, the judiciary has been using Prospero House, usually a conference center, as a temporary site for overspill cases from Southwark Crown Court, in southeast London. The building is a stone's throw from a crown court building sold off to private developers in 2019, which has been used as a set to film legal scenes from Netflix drama Top Boy.

"Rather than pumping money back into existing court estate and improving their facilities, we seem to be spending money on Nightingale courts instead. They may be a good idea in the short term but are they going to work in long term when we still have crown court estate crumbling?" Csemiczky said.

Ongoing delays and cancellations mean some trials have been postponed until 2022 or even 2023.

"It is often said justice delayed is justice denied, and there is a real risk that in some cases, because the evidence will have deteriorated in the delay until the case is heard, that could result in defendants successfully arguing that couldn't have a fair trial as a result," said the Law Society's head of justice Richard Miller.

The pandemic has hastened the take-up of video technology with interim and administrative hearings taking place remotely using video link. It has also kickstarted the long-awaited implementation of the Common Platform program, which will move the courts from a paper-based system to a fully digital one.

Originally due to be completed in July 2018, the platform is still being rolled out to cities across the country in 2021. It is intended to replace a range of aging systems and provide a single case management system for the police, Crown Prosecution Service and the courts.

"It has still got a few teething problems, but it should be a much more effective and 21st century way of managing the evidence in criminal cases," Miller said. "Everyone expects that will be a permanent feature of the system and the pandemic has meant that it has been rolled out quicker than it might otherwise have been."

The head of the country's court administrator has said 90% of courts and tribunals now use some form of remote technology and more than 70,000 crown and magistrates' court hearings have been held via a cloud video platform, known as CVP.

"We have achieved an immense amount in our battle to keep justice moving during the pandemic — restarting jury trials before anyone else, turbo-charging the rollout of video technology, bringing magistrates' backlogs down, and opening more courtrooms for jury trials," said Justice Secretary Robert Buckland.

New technology that connects securely to the existing justice video network that links police stations and prisons to courts was initially rolled out to 60 magistrates' courts and 48 crown courts. However, it will not be used for jury trials, and a judge will decide whether it is appropriate to use in any other hearing on a case-by-case basis.

But the use of remote technology has been patchy. Csemiczky said "there is no consistency in the way magistrates' court grant CVP access," which differs from court to court. And some of the changes are expected to disappear with the end of the pandemic.

Police were quick to scale back the use of video remand hearings after finding it was costly and took up too many resources, such as cell space while defendants waited for video hearing slots. At the same time, lawyers were also concerned the hearings created "a lower level of empathy between the decision-maker and the defendant," Miller said.

"We had reservations about it for the quality of justice and the difficulty of enabling interactions between all the participants to a video hearing, while the police have got concerns in relation to costs, logistics and cell usage," Miller said. "So, there are a number of difficulties that would have to be overcome to carry on handling cases in that way in the future."

There is a stronger case for administrative crown court hearings to continue to be heard remotely, Binning said, because they don't require defendants to be present

However, it is unclear how much the criminal justice system will learn from the experience of the pandemic.

"Sometimes, of course, it is essential for the advocate to be physically in court," Binning said. "But the reality is the government has not done enough to make use of technology to push criminal courts forward to conduct more cases remotely."

"Virtual jury trials would not be a complete solution and it is not favored in all quarters but there is scope for virtual solutions to be put in place for jury trials as well as other hearings. Something drastic has to be done if we are going to bring court capacity back to a normal threshold," he added.