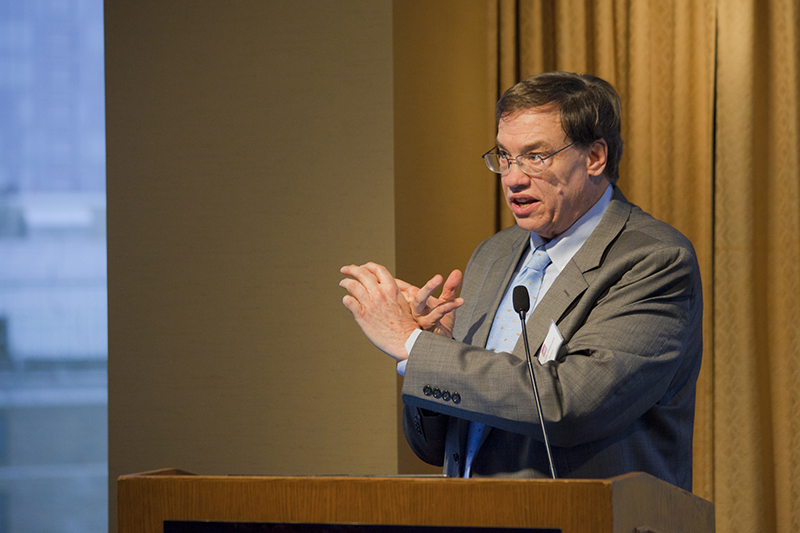 
Judicial election reform has been a centerpiece of Thomas Phillips' entire career.

He was appointed chief justice of Texas' Supreme Court in 1988, as several of its justices were mired in campaign finance scandals. When Phillips himself had to run for office some months later, he voluntarily capped donations at $5,000 per person or entity, making national headlines.

Now a partner at Baker Botts, Phillips regularly opines about the need for reform, writing in an April op-ed for the Austin American-Statesman that "the very act of campaigning for judge risks lessening public confidence in the rule of law."

the 2009 U.S. Supreme Court case that found judicial campaign contributions could hamper a party's right to a fair hearing.

He also sits on a state commission that will analyze whether Texas judges should continue to run as political candidates with party designations.

Yet as a candidate, Phillips was a fundraising powerhouse, pulling in $2.6 million in one 1990 race. He says as a Republican running in a state that was then controlled by Democrats, he couldn't have won without raising a large sum.

Here, Phillips talks to Law360 about ethical fundraising and whether judges think about contributions once they take the bench. (The interview has been edited for length and clarity.)

How involved were you in your campaign's financing?

I was very involved. During my first two races [in 1988 and 1990], Texas had no limits. And when I say no limits, I mean no monetary limits, no temporal limits, you could start raising money years in advance, and there was — and still is — absolutely no prohibition on a candidate approaching any potential donor.

I was upset by the appearance of impropriety that could cause. My opponent in 1988 had taken a $120,000 contribution from someone who had a case in front of the court on rehearing. And then the word was he voted differently on rehearing than he did the first time. So, I set a cap on what I would take from any individual contributor or PAC.

For a trial judge, who's on open display [in the courtroom] day in and day out, it's a little bit easier for people to make an informed judgment about whether you're fair and impartial than it is for an appellate judge, who does almost all the work behind closed doors.

But I could not run the race without money. And we raised a lot of it.

Once you took the bench, did you think about which attorneys had donated to you?

Actually, I think a lot of people don't know how divorced appellate judges sometimes get from who the lawyers are. The opinions are written and drafted months after the argument, and you frequently don't remember the attorneys or the firms they're from, unless the arguments were exceptionally good or remarkably bad. But of course, you do know who the parties are.

Judges are not hermetically sealed. You're in the same Sunday school class, you play golf at the same course, your kids are in school together — there's many ways that you see people who have matters in front of you. And I don't know how you ever completely overcome the suspicions of the opposing party in a case where you have some preexisting informal relationship with the other side.

All judges are hemmed in in most cases. In the vast majority of cases, there's a statute that controls or there's a case clearly on point. On an appellate court, you more frequently have open questions, but you also have a collective decision. So there's somewhat less chance that just someone being a friend or a supporter equals a win.

Did anyone ever file a recusal motion when you were on the bench, based on campaign finance?

I don't recall a motion ever against me on finance, because I was kind of Mr. Anti-Finance. I had a cap, and I thought if you were under the cap, there was no need to recuse. I obviously recused when there was a case that came out of my law firm while I was still there, or when I'd been the trial judge in the case.

Right now in Texas, we have caps [on contributions to judicial candidates]. It depends on the size of the jurisdiction of your court, but it's $1,000 to $5,000.

There's a presumption that whatever that number the legislature has set is, it's not high enough that the ordinary person would be biased by it. And I don't know that any other system is workable.

As a wise judge I once served with said, there's no real way to take politics out of judicial selection. The best you can hope for is to minimize politics in judicial retention.

Appointments are a political process as well. You're being selected by a politician.

You are. And right now in a lot of states, the activity you have in certain clubs and your disdain for certain other clubs is a very key factor in whether you're going to be seriously considered for an appointment.

Texas is looking at this issue again — the legislature created a study commission — hopefully for the right reasons, and not because of shifting partisan lines.

Our big problem in Texas is all our judges are elected. Our larger counties have 50 or 60 judges and they all can get swept in and swept out due to forces that have nothing to do with their qualifications.

That's apart from the money. Money will be a problem when the state gets very closely divided again, particularly if the court becomes a hot topic. And then it's going to be worse than it's ever been before, because these races have become nationalized.

When I was running in the '80s and '90s, your contributors were all from Texas. But now, the U.S. Chamber of Commerce and the trial lawyers, they're chunking big money into races all across the nation. And it's independent expenditures, like in [the Caperton case], and the candidates have no control over them. There's no sense that these people need to be bounded by the truth. They just come in and tell a lurid tale and leave.

There are many schools of thought about how judges should deal with direct contributions. One is that it's best for a judge to remain as ignorant as possible, not to solicit donations directly and let their campaign finance person deal with it.

Most states do that. But some of those states then require the judge to certify that the finance report is accurate. That's a little hard to do if you're totally ignorant of what's in it.

And sometimes that same state will say judges have to remain vigilant that donors aren't appearing before them in court. They try to adopt both these philosophies simultaneously.

I think you can't do both.

I remember one time, the Houston Chronicle, in different editorials … criticized candidates for raising a lot of money, therefore they were going to be beholden, and they criticized a candidate for self-funding, saying that was just buying a prestigious job, and then they criticized one person and said they've done no campaign at all, they haven't raised any money or tried to tell us who they are.

So I thought: They've covered the waterfront.

There is no right way.

Well, you do have to choose your poison. And the other selection methods all have problems. We've been struggling with this for 225 years, and there's not one right way.

Cara Bayles is a features reporter for Law360. She last wrote about the barriers Native Americans face accessing the U.S. legal system. Follow her on Twitter. Editing by Pamela Wilkinson, Jocelyn Allison and Haylee Pearl.