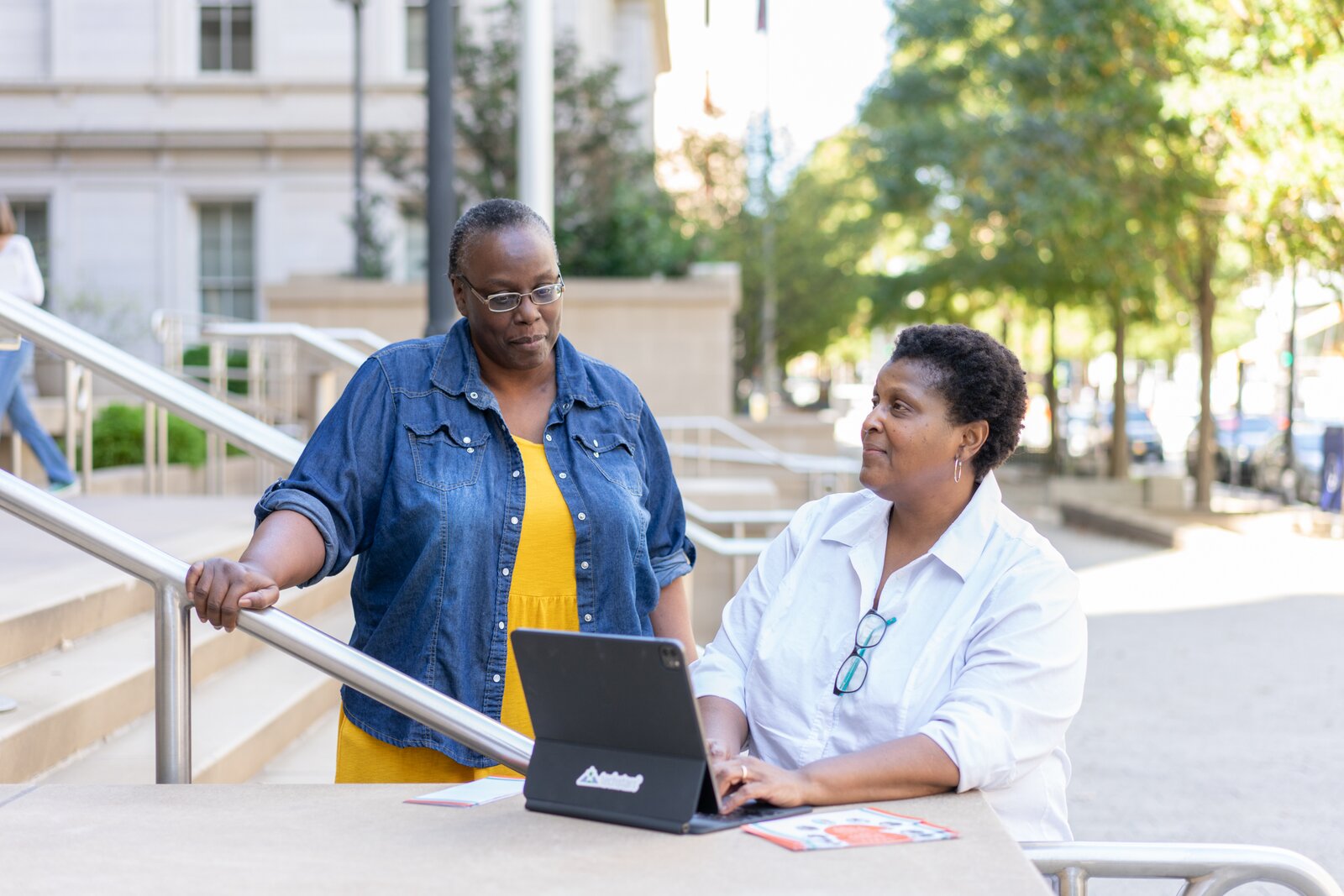 Debra Slone, left, and Sonja Ebron co-founded Courtroom5 to provide people representing themselves in civil cases more resources to navigate the system. Their company is one of over 100 owned by people from marginalized communities that received free corporate legal services through the Wiggin Opportunity Initiative. (Courtesy of Courtroom5)

"While born of current events and frustrations, the firm wants to do something that will outlast the spotlight of this particular moment and support long-term improvement in opportunity and equality in our communities," Managing Partner Paul A. Hughes said in the June 2020 statement announcing the Wiggin Opportunity Initiative, which ultimately also seeks more diversity in business ownership. 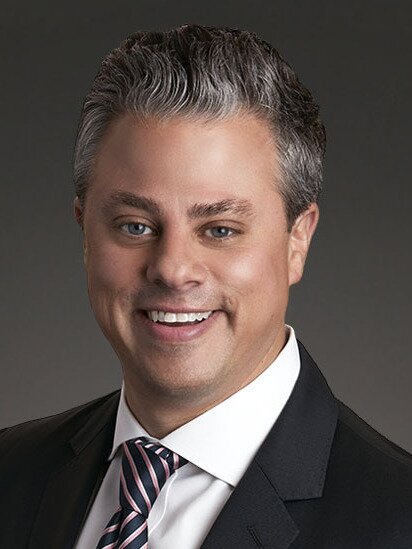 Last month the firm said it met the initiative's first-year goals by offering "over $1 million in legal services" to more than 100 eligible companies. These services range across the corporate law spectrum, from patents and trademarks to fundraising structure and company setup, the bailiwick of about half of Wiggin and Dana's attorneys, according to several attorneys and clients who spoke with Law360. They also offer a way for about 50% of the firm's more than 150 attorneys to use their specific skills in a less traditional pro bono avenue, partner Evan S. Kipperman said.

"The firm is probably half litigators and half transactional, so by creating this new avenue for pro bono services that are not pro bono per se, as far as the American Bar Association is concerned — but still incredibly useful to the world — we've actually unleashed the other half of the firm," Kipperman, who co-chairs Wiggin and Dana's emerging companies and venture capital practice group with Hughes, told Law360. 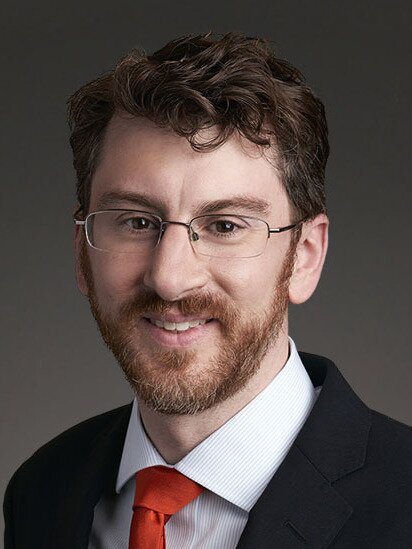 Litigation partner John Doroghazi, a member of the initiative's oversight committee, said that the project actually came out of conversations among the firm's transactional lawyers and builds on the trial advocacy that has otherwise dominated the firm's pro bono work. Wiggin and Dana attorneys are now being routinely appointed as pro bono counsel by the federal courts of Connecticut and other states, he said.

"We came up with the Wiggin Opportunity Initiative and said, 'Look, let's help businesses that are owned [in] minority communities who otherwise couldn't afford the legal services we provide," he told Law360.

The firm worked with such local strategic partners as the NAACP's Connecticut chapter, Tsai Center for Innovative Thinking at Yale University and Women's Business Development Council to solicit potential clients. Wiggin and Dana spokespeople declined to offer most clients' names, citing confidentiality, but noted that they span the country and various industries. Examples have included a beef jerky company in Philadelphia, a pet ride-share startup in New Jersey and a New York-based Chinese restaurant.

"The great thing about the program is, we're not differentiating between the local dry cleaner and the company that's trying to build the billion-dollar idea but just needs someone to help them get off the ground," he said.

By having a diversified client base, you oftentimes may find a client who does say, 'Do you have any people of color that can work on this as well?'

One acknowledged client is Courtroom5, an online subscription platform with legal resources for people stuck representing themselves in civil litigation.

Courtroom5 was founded by Durham, North Carolina-based former professors Sonja Ebron and Debra Slone, who Ebron said draw from their own experiences with foreclosures, debt collection, personal injury and related matters to help others.

"We represented ourselves, and as fairly educated folks, we were able to figure it out over time," Ebron told Law360. "But we just had no idea, going in, how complex civil litigation was, and we saw a lot of people who didn't have our educational advantages and were not getting a fair opportunity to be heard in court."

Ebron and Slone, both Black women, worked with Kipperman and his colleagues to set up fundraising structures, which Ebron said made it easier to prepare data rooms for investors, issue SAFE notes — documents that help startups raise seed capital — and securities and navigate board consent policies. She added that it now pays for Wiggin and Dana's services, which were otherwise "billed" to the initiative per the attorneys' standard counting of work hours.

"They very quickly made themselves indispensable, so we were happy to pay them," she said.

The firm's website notes that the initiative is open to businesses whose owners are part of at least one of various underrepresented groups. Wiggin and Dana's definition of "minority" is "guided by applicable statutes in the various jurisdictions where the firm maintains physical offices or otherwise conducts business," the site says. Based on Connecticut laws and the firm's own discretion, this umbrella includes Blacks, Latinos, Asian Americans, Pacific Islanders, Indigenous people, women, LGBTQ people, veterans and "all persons having origins in the Iberian peninsula, including Portugal, regardless of race."

Across different industries, many equity initiatives that emerged last summer have used similarly broad understandings of "diversity" and "minority" despite the Floyd protests' particular attention to the persistence of anti-Black racism. One recent study showed that Black entrepreneurs received only 1% of the $130 billion that U.S. venture capitalists spent in 2019.

This terminology seemingly reflects how Wiggin and Dana views its other equity-focused work. Jana Simon, the firm's director of inclusion, diversity and equity, recently told Law360 that about 40% of the firm's attorneys identify as coming from underrepresented groups, with 30% of partners being women and people of color, as of December 2020. 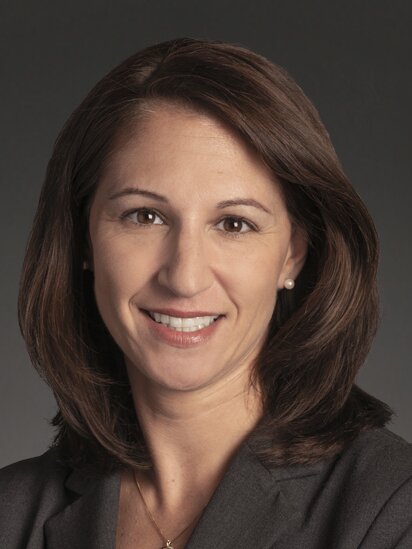 Doroghazi and Robyn C. Abbate, another initiative committee member, said that the initiative's wide eligibility does not hinder its goals but instead allows for the resources to reach many business owners who are otherwise disproportionately frozen out of venture capital funding rounds.

"We cast a broad net to help as many minority-owned business owners as possible," Abbate, a partner whose practices focuses on commercial leasing and real estate law, told Law360.

"We just wanted to do our best to make the most difference for the most people," Doroghazi said. "We thought that painting with a relatively broad brush helped us be able to do that."

Ebron noted that efforts to fight oppression do not always answer questions of which groups suffer more or less.

"Part of being marginalized, sort of implicit in it, is the inability to force reparations," she said. "When we are talking about folks that are voluntarily attempting to fix some damage, you've got to let them stick with what's close to their heart. ... There's so much damage that I think we can't look askance at efforts to repair any of it." 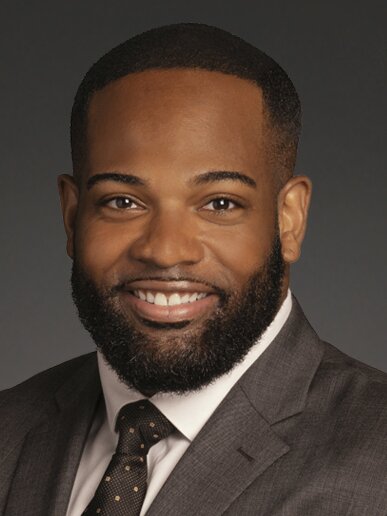 Associate Jermaine A. Brookshire Jr., who primarily works in Kipperman's practice group, added that the initiative's wide net speaks to the diversity that Wiggin and its clients like to see in one another.

"One of the reasons why I chose [to work at Wiggin was] the willingness to address that sort of ugly issue, and part of that is by having initiatives where we're trying to make sure our client base is diversified," Brookshire, who is Black, told Law360. "By having a diversified client base, you oftentimes may find a client who does say, 'Do you have any people of color that can work on this as well?'"

Brookshire also mentioned another benefit: the chance for associates like him to build their practice by trying new things. For instance, he got to draft data privacy language for clients' websites, on top of seed financing work.

"A lot of companies copy and paste [terms of use protocol] from other similar companies, which is really not a best practice and can leave a lot of exposure," he said. "So it was great to be able to help in that way, and really work with things that clients don't typically see as an issue until it's an issue."

The firm looks forward to further success with the opportunity initiative among its pro bono portfolio. Asked what will happen if the firm hits the $10 million benchmark early, Abbate and Doroghazi said that the firm will reevaluate the next steps.

"Participating in pro bono efforts has always been a core value of Wiggin and Dana, and will continue to be well after the 10-year mark of WOI, whether through a continuation or otherwise," Abbate said. "The firm continuously explores different ways to empower our communities and create a more diverse and equitable world, and WOI is a critical step in those efforts."