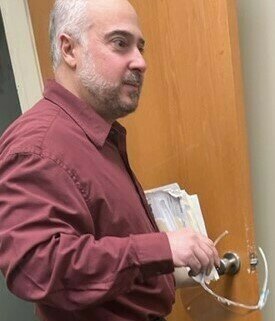 Judge Frank M. Mora is seen in the Poughkeepsie City Court on Tuesday without a mask in violation of the state court's COVID-19 mandates.

The actions of Poughkeepsie City Court Judge Frank M. Mora underscore what critics deem a double standard favoring judges in the enforcement of COVID-19 rules. Even as state officials are poised to fire more than 320 unvaccinated court employees, they say they cannot formally discipline Judge Mora any more than they can Court of Appeals Judge Jenny Rivera, who has continued handling cases remotely despite flouting the vaccine mandate.

After refusing to be inoculated and failing to win an exemption this month, Judge Mora was ordered to stay home and preside over his cases remotely. But he returned to the courthouse on an almost daily basis, donning only a face shield, according to two people who work in the building and an attorney who saw him.

State court policy is that masks are mandatory in courthouses. Face shields do little to protect against COVID-19, according to the U.S. Centers for Disease Control and Prevention.

"It's a violation of our policy. You're not supposed to be there," said state courts spokesman Lucian Chalfen, speaking broadly about the policy for unvaccinated judges denied an exemption. "They are not allowed into the courthouse, into their chambers, or any other nonpublic area."

And while certain criminal matters can be handled remotely by those judges, arraignments cannot be for constitutional and policy reasons, Chalfen said.

The judge directed Law360's inquiries to Chalfen, who declined to comment specifically on Judge Mora's behavior.

On Tuesday morning in Judge Mora's courtroom, he appeared via video link to arraign a young woman dressed in pink scrubs and yellow croc sandals on a single count of criminal mischief. He was later seen inside the courthouse, according to a source and a photograph of the judge taken after the hearing. The photograph shows the judge in the court's back offices not wearing a mask, holding a face shield in one hand and a stack of files in the other, which Mora later said were personal medical files.

It was one of at least four arraignments Judge Mora conducted by video this month, according to court records.

The Dutchess County Public Defender's Office first raised concerns about whether the judge had the authority to hear criminal cases remotely. In a Jan. 7 email to the supervising judge of the city court, the chief public defender for criminal cases said her office had "concerns regarding whether Judge Mora has express permission and authorization to do this."

The supervising judge replied that Judge Mora received special permission to preside over his cases virtually from home, according to the email chain obtained by Law360. But the supervisor did not respond to the public defender's question about whether Judge Mora was authorized to hear pleas.

It is unclear what consequences, if any, await Judge Mora for his actions. Only the New York State Commission on Judicial Conduct is empowered to discipline a state judge, and its investigations usually take more than a year while judges remain on the bench, often drawing six-figure salaries. State records show Judge Mora collected a nearly $190,000 salary in 2021.

Chalfen said "there are repercussions" for judges who flout the administration's orders, "which may well include a referral to the State Commission on Judicial Conduct."

Meanwhile, many nonjudicial employees who sought exemptions are now facing termination. One of them is a court officer who works in the same small courthouse as Judge Mora.

Jermaine Dublin is among 111 court officers statewide who are poised to lose their jobs after failing to get an exemption as of Jan. 13, a court system tally shows.

"The fact that our essential court officer could potentially lose his job over being denied an exemption from the vaccine, while there is no consequence for the judge for requesting the same exemption, exposes a major fallacy in the state's vaccine mandate policy," said Patrick Cullen, president of the New York State Supreme Court Officers Association. "There should not be one standard for judges and another standard for court employees."

Dublin did not respond to a request for comment.

Systemwide, 1,125 employees had requested medical or religious vaccine exemptions as of last week. Of the exemption requests that have been ruled on, about 38% have been denied. Nonjudicial employees have 10 days to comply before they are forced out of the workplace with their vacation days docked until they are terminated.

Unvaccinated employees with an approved exemption can continue working with mandated weekly testing.

Of the 19 judges who requested exemptions from the vaccine requirements, four have requests pending, 10 had exemptions granted, and five had them denied — including Judge Mora.

In the courthouse Tuesday, Judge Mora was told that the local jail remained on lockdown, with inmates unable to make their mandatory in-person appearances because so many inside had contracted the virus. But the judge appeared to make light of the pandemic.

After the public defender indicated a defendant had tested positive and could not physically appear in the courtroom that day, Judge Mora joked, "Isn't it nowadays that everyone has COVID?"

As of that Tuesday, 35 people had died of COVID-19 in Dutchess County in January, according to county data compiled by The New York Times. Nine more died the next day.

A short while later, Judge Mora was photographed in the office without a mask.

Update: This article has been updated to clarify when the judge was seen following the video arraignment and to include Judge Mora's description of the nature of the files he was seen holding.