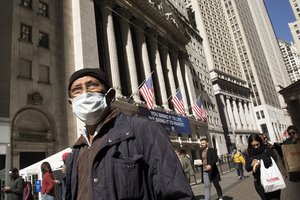 The long-awaited trial was postponed Tuesday due to increasing concerns about the coronavirus, which has infected at least 173 people in New York. (AP)

New York Supreme Court Justice Jerry Garguilo postponed the trial, previously set to start March 20, at the direction of Chief Administrative Judge Lawrence K. Marks. A status conference has been scheduled for April 14 to see if the trial can begin around that time, two sources confirmed.

Stephanie Galteri, a law secretary for Justice Garguilo, told Law360 that the trial has been "postponed indefinitely" because of efforts to contain the coronavirus, which has infected at least 173 people in the Empire State, according to the office of Gov. Andrew Cuomo.

"We hope to get it up and running as soon as possible," Galteri said.

Fabien Levy, spokesperson for New York Attorney General Letitia James, said Tuesday that the coronavirus is "the sole reason" for the postponement, "not defendants' attempts to roll this back because they want to delay, delay, delay."

In a written order issued Tuesday and obtained by Law360, Deputy Chief Administrative Judge Vito C. Caruso, citing a directive from Judge Marks and consultation with Justice Garguilo, called for the trial to be adjourned.

The trial is expected to test allegations from New York and two Long Island counties against major drug manufacturers and distributors. After a state appeals court last week refused to delay the trial for procedural reasons, James vowed that "the deadly scheme perpetrated by these companies will be presented in open court and laid bare before the American people."

Although states and local governments have filed thousands of cases blaming drug companies for the opioid crisis, only one case has gone to trial. That trial saw Oklahoma's attorney general win a $465 million judgment against Johnson & Johnson, which is appealing.

Update: This story has been updated with new information on the number of coronavirus infections in New York.