NY Judge Who Called Atty C-Word Says It Was 'Compliment'


Law360, Albany, N.Y. (June 2, 2020, 9:15 PM EDT) -- A New York state judge facing removal for using sexist slurs against a female lawyer, and others, told the state's highest court on Tuesday that a judicial watchdog had wrongly concluded his remarks indicated he was sexist.

Counsel for Paul H. Senzer, a part-time justice of the Northport Village Court of Suffolk County since 1994, argued before a Court of Appeals panel that the State Commission on Judicial Conduct erred in finding that his client's use of gender-specific profanity rendered him unfit to wear the robes, going so far as to say his particular use of "the C-word" could be seen as a "compliment" to the female attorney.

In a sign of the waning impact of COVID-19 on the state's judicial proceedings, the hearing was held in person, with all the parties in the room, minus one high court judge who participated remotely in the livestreamed arguments.

"We don't think the gender bias is obvious and we don't concede it. We could go into multiple interpretations of the words used, but I don't think that's necessary. I can just point out the worst one — the C-word," said Senzer's attorney Michael Blakey.


"It's not a C-word by itself. It's a term of art: 'C on wheels.' Which, obviously, refers to the aggressiveness of that attorney. It's a left-handed compliment is one way to look at it," Blakey said, later saying his client said his swear words were used for emphasis and persuasion.

"It's obviously inappropriate," Blakey said, quickly adding that he wasn't seeking to excuse the language, only that it's relevant in determining if removal is the appropriate remedy. A formal censure would be a sufficient punishment, he said.

Justice Senzer, whose $10,000-a-year part-time judgeship allows him to work as an attorney on the side, deployed a range of obscenities at a variety of targets, according to the commission's fillings. But the "C-word," a commission attorney noted, in particular has been branded "vile and reprehensible" by the Court of Appeals.

Nevertheless, Justice Senzer trotted out the term in a November 2014 email to grandparents he was representing against their daughter — whom he referred to using another gender-specific slur and expletive — in a family court matter over visitation with the grandchild.

Two days before Thanksgiving that year, Justice Senzer advised his clients in that email that he believed their daughter would fight the case.

Karen D. McGuire of McGuire Condon PC, the attorney who was the target of that particular expletive, was amazed by Justice Senzer's attempt to downplay his word choice.

"Isn't it every female attorney's dream to be called a C-U-N-T on wheels? Right?" McGuire said in an interview with Law360, responding in stunned sarcasm to Justice Senzer's argument on Tuesday. "Don't we swear our oath and say, 'This is what I want my legacy to be.'"

The Court of Appeals panel, composed of three women and four men, voiced some skepticism of Justice Senzer's view of the offense, with Judge Jenny Rivera sparring with Blakey over his insistence that his client only used the obscenity once.

"Counsel, it wasn't said once. It was said multiple times," Judge Rivera said.

"No, no," Blakey said, correcting the judge. "Different words were used at different times. The C-word was used that one time."

"No. The various words were used. You say there's no pattern, but there is at a minimum a recurrence of the conduct," Judge Rivera said, as Blakey tried to interrupt her to agree before being silenced. "Excuse me. A recurrence of words that are disparaging to females and using other words that are also problematic because of their profanity or body parts that they're referring to, correct?

"Right," Blakey conceded, before noting that the remaining evidence of foul language by the judge was all directed at the daughter in the family court dispute and her husband "and they were all by email." The attorney argued that at least Justice Senzer hadn't made the remarks in a more public setting, like a bar. 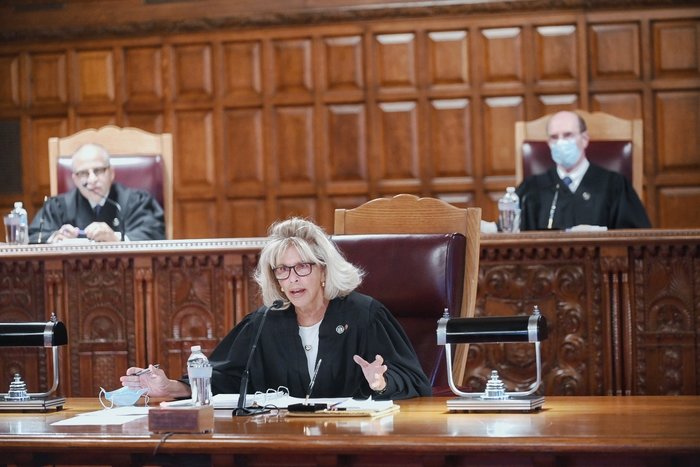 "Counsel, counsel. I guess the problem I'm having is that Judge Senzer in his representation of this client denigrated every stakeholder in the system," said Chief Judge Janet DiFiore, noting that the charges against the Long Island judge included evidence that he used a wide array of vulgar language to describe the litigants, the attorney and even the referee in demeaning terms.

"But how do we keep a person who has engaged in that kind of conduct on the bench? What would we say?" the chief judge asked. "Censure is enough to erase all of the damage that's been done?"

Blakey said that the high court should exercise its power to reduce the determination for removal to a censure based on several mitigating factors: Justice Senzer's candor and contrition before the commission, his "great career" as established by character witnesses and the fact that his motivation for using these "bad words" wasn't "to make money."

Edward Lindner, counsel for the commission, reiterated that Justice Senzer had testified that he understood that his language in the 2014 email might suggest he harbors a bias toward women or female lawyers.

Lindner also noted that there were three emails in which Justice Senzer used gender-specific profanity about the daughter in the family court case and another email in which he refers to the daughter's attorney as "eyelashes."

While the last label was "not on par" with his other derogatory moniker for the attorney, it was "nonetheless sexist."

"It is reducing a woman, a female professional, to her appearance which is the kind of thing that is rarely if ever done to a male professional," Lindner said. The judicial watchdog attorney also pointed the panel to its own past decision finding the use of the "C-word" by a judge "by itself ... suggests that the judge was unfit for judicial office."

"You have someone using the same words here," Lindner said.

The panel reserved decision on the matter and adjourned.

The commission was represented in-house by Edward Lindner, Mark Levine and Brenda Correa.

The case is In the Matter of the Request of Paul H. Senzer, a Justice of the Northport Village Court, Suffolk County, case 34 NY3d 970, in the Court of Appeals of the State of New York.