Law360 (October 23, 2020, 4:47 PM EDT) -- President Donald Trump's campaign has spent more money on legal fees this election season than any other presidential candidate ever, a Law360 analysis of Federal Election Commission data shows, in what has been a boom for the president's favored firms like Jones Day.

In 2019 and 2020, Trump shelled out $12.95 million in legal bills, according to campaign data filed with the FEC by its final pre-election reporting deadline of Oct. 22. That's more than six times the $1.99 million his opponent Joe Biden has spent. 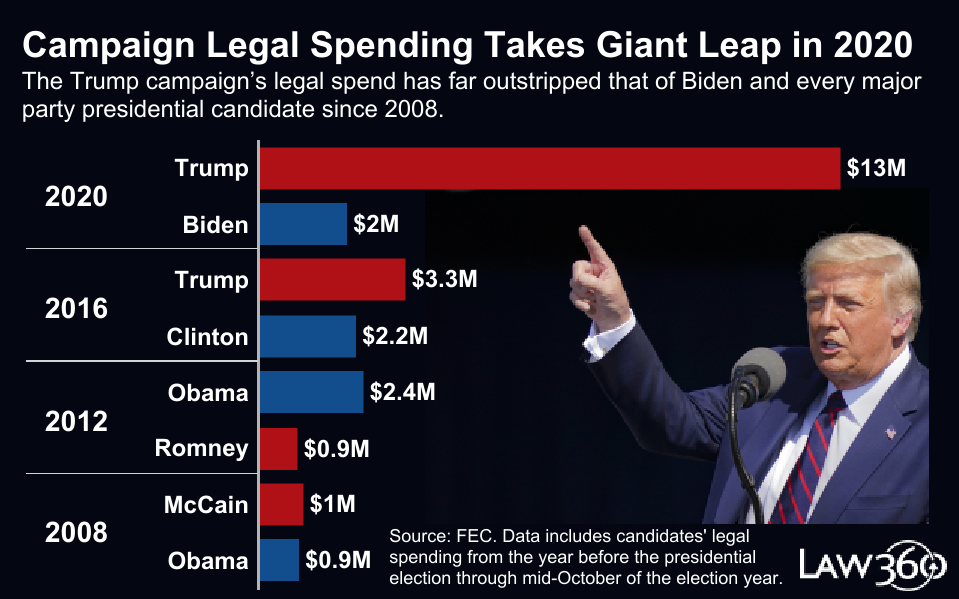 The unprecedented legal spending is part of a political strategy that includes using litigation as a tool, something Trump has long employed as a strategy in his life as a businessman, according to experts. The campaign is involved in numerous voting-related and defamation lawsuits that may either sway the election or act as vehicles to further the president's political agenda.

"There's a whole world of legal spending that is so specific to Trump himself that you wouldn't see in any other administration or campaign, be it Republican or Democrat," said Robert McGuire, research director at nonpartisan legal watchdog Citizens for Responsibility and Ethics in Washington, D.C.

As an example, McGuire pointed to at least four defamation and libel lawsuits that Trump has filed in federal court against CNN, the New York Times, the Washington Post and an NBC affiliate, claiming that the media outlets have published false information about him.

"I think a near-universal legal opinion is these are completely frivolous lawsuits, but they are a campaign tactic," McGuire said. "It's a way he can gin up anger and enthusiasm and sort of give the impression he's going after these people when the chances of an actual victory on his part is vanishingly small."

Another major area of litigation for the Trump campaign this election season has been in the arena of voting.

In Pennsylvania, for example, the campaign sought a judgment that the state election code requires mail-in ballots to be thrown out if the voter's signature doesn't match the signature on their registration. However the state's supreme court ruled Friday that no such requirement exists. In New Jersey, the campaign recently lost a lawsuit seeking to limit the timeframe in which mail-in ballots are counted.

"Generally, it's not in a campaign's interests to spend millions of dollars on litigation aimed at stopping people from voting. Usually, it's more beneficial persuading people to vote and turning them out in your favor," said Adav Noti, chief of staff at nonpartisan voting rights group Campaign Legal Center.

"But, for whatever reason, the Trump campaign has decided that this disenfranchisement legal strategy is part of its political strategy,' Noti added.

A handful of law firms have seen significant financial benefits from the Trump campaign's litigiousness.

Law360's look at FEC reporting by the presidential campaigns shows that the six law firms that received the most legal fees from the Trump campaign so far in 2019 and 2020 are Jones Day, Harder LLP, LaRocca Hornik Rosen & Greenberg LLP, Porter Wright Morris & Arthur LLP, Elections LLC and Consovoy McCarthy PLLC. Together, those firms earned $10.9 million. 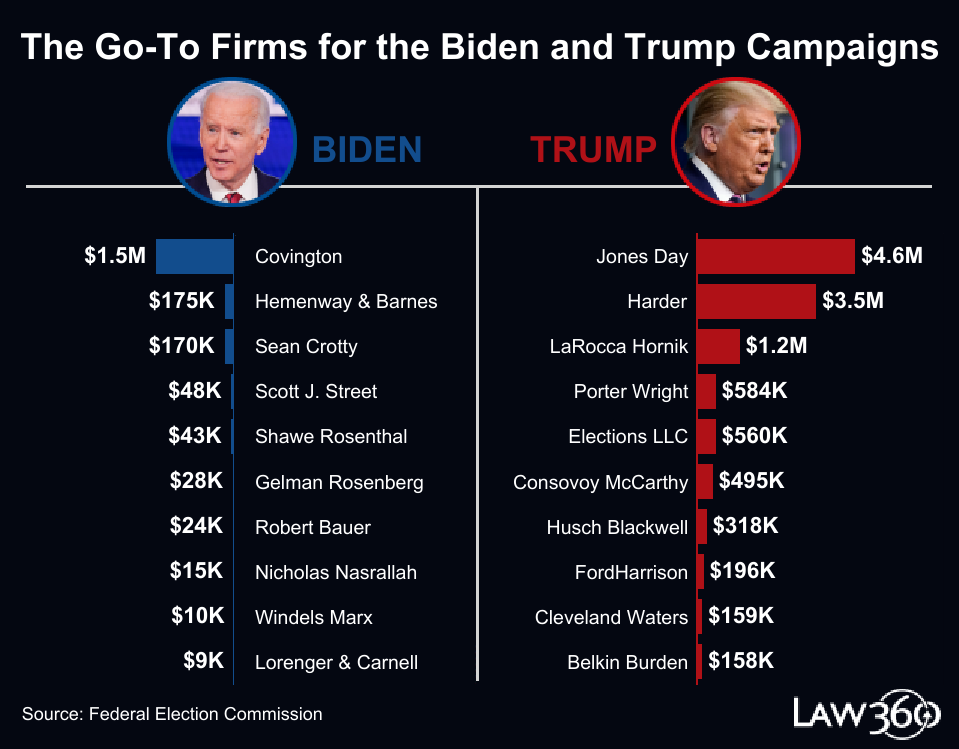 
The top two earners, Jones Day and Harder, have accumulated $4.6 million and $3.5 million, respectively, from the president's reelection campaign since the beginning of 2019.

A review of federal court filings involving the Trump campaign shows Jones Day has represented it in a lawsuit in Ohio over whether multiple drop boxes for absentee ballots should be permitted in each of the state's counties. The campaign's stance was to oppose an effort by the League of Women Voters of Ohio to allow for more drop boxes than just one per county.

In another lawsuit the law firm is representing the campaign in a proposed class action accusing it of sending unwanted text messages in violation of the Telephone Consumer Protection Act.

Harder's representations include the president's defamation lawsuits against the New York Times, CNN and the Washington Post, as well as adult film actress Stormy Daniels' libel suit against Trump after he disputed her claim of having been threatened to keep quiet about an alleged affair with him.

LaRocca Hornik, meanwhile, is representing the campaign in a lawsuit brought against it by a former spokeswoman of the Trump campaign in the 2016 election alleging pregnancy discrimination.

Consovoy McCarthy also appears to be a go-to law firm for the Trump campaign for litigation at the federal level, representing it in multiple voting rights and election-related lawsuits and in litigation over efforts to get Trump to divulge his tax returns.

The firm is also representing Trump as an individual in litigation over his alleged violations of the emoluments clause.

Some of the litigation that the Trump campaign is involved in departs from the norm of what presidents have used campaign funds for and may even violate campaign finance laws, according to Brad Deutsch, managing director at Foster Garvey PC's Washington, D.C., office.

Federal election law prohibits candidates from using campaign funds for legal fees unrelated to either their status as a candidate for office or as an officeholder, when those funds are allocated for "personal use," Deutsch said.

A clear example of one such violation would be the Larry Craig scandal, in which the Republican senator from Idaho was arrested for lewd conduct in a men's restroom at an airport, and then used campaign funds for his legal defense, reasoning that the trip he was on during the incident was business-related. The FEC filed suit demanding Craig return the money and won.

Some of the litigation that the Trump campaign is involved in, and paying legal fees for, falls into areas that are less than crystal clear when it comes to whether or not they qualify as personal use, Deutsch said, such as the Stormy Daniels defamation case and litigation over the release of his taxes.

But the FEC does not currently have a quorum, and so is unlikely to enforce campaign violations in the near future, he said.

Still, the use of litigation as a campaign tool poses other risks, according to McGuire.

One, he said, is that voter and donor confidence may be harmed when funds are used for legal matters that could be perceived by some as not closely related to the campaign.

"What it comes down to is not necessarily any big legal question, just, what is the appearance it gives?" McGuire said. "It seems to sort of lend itself to this idea that the Republican Party is Trump right now, where even his personal legal issues are the legal issues of the party to some extent, and we've just never seen anything like that before."

Another potential pitfall is strategic: the campaign is spending millions of dollars on legal fees, which then cannot be used for advertising and other election-related activities, McGuire said.

"There are reports that the Trump campaign is short on cash. If they're racking up tens of millions of dollars on legal fees, that's money they could be spending elsewhere," he said.

Methodology: Law360 searched quarterly, monthly and pre-general Federal Election Commission filings for the principal campaign committees of each presidential candidate, focusing on the year before each election through mid-October of the election year, when the campaigns file the last FEC reports before the election. For example, for the 2020 election, the legal spending data includes expenditures from Jan. 1, 2019, to Oct. 14, 2020. Data includes any expenditures marked for a "legal" purpose.