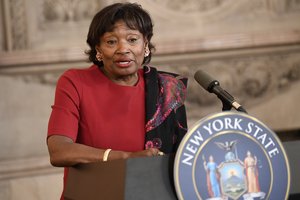 The preliminary budget summary from the Senate Democratic majority was circulated over the weekend. The state's new fiscal year starts Wednesday, and Democratic Gov. Andrew Cuomo and state lawmakers are trying to come to grips with the COVID-19 pandemic. State officials have estimated that measures taken to try to stem the pandemic in New York could decrease state tax revenue by $10 billion to $15 billion next fiscal year, but details about a final budget have been scarce.

The preliminary budget summary was circulated by lawmakers and industry insiders, according to a source who provided the document to Law360. While the document includes summaries of what Senate majority lawmakers are considering in negotiations, the positions are fluid and could change, the source told Law360.

The summary shows Senate lawmakers have proposed omitting a proposal by Cuomo to legalize adult-use cannabis this year. In addition, the document said the governor has proposed allowing the state to issue up to $8 billion on short-term bonds that would be exempt from state statutory debt limits. The bonds would give the state liquidity "in case of a cash shortage caused by lowered revenues and the shifting of the income tax filing date," the document said.

New York, like many states, has moved its state tax deadline to July 15 to comport with federal deadlines that have also been extended because of the coronavirus pandemic. Some states have worried about those consequences.

The Senate's proposal would also omit Cuomo's plan to reduce the tax burden on small businesses, according to the summary. In January, Cuomo proposed cutting the state's corporate tax rate for businesses with 100 employees or fewer and less than $390,000 in annual net income from 6.5% to 4%. He also proposed tripling the current 5% income exclusion for farmers and sole proprietors to 15% for those paying taxes under the personal income tax who have income of $250,000 or less.

The Senate summary says it was considering proposing changes to two "as-of-right" New York City tax abatement programs, the Industrial and Commercial Abatement Program, or ICAP, and the Relocation and Employment Assistance Program, or REAP. The summary said the changes to ICAP would shorten certain benefit periods, exclude self-storage projects from the program and extend the program to 2025. The changes would also increase reporting requirements and allow for the revocation, suspension or termination of benefits for violations of business regulations, the summary said.

The summary said Cuomo's administration rejected capping the program, rejected shortening any benefits periods and rejected limiting the ability to revoke, terminate or suspend benefits related to nonpayment of taxes, wages or fraud against public entities.

The Senate's proposal also omits Cuomo's proposal to make changes to state criminal tax fraud statutes. But the Senate would agree with the governor's proposal to extend and limit the state's film production tax credit and to eliminate the state Board of Real Property Tax Services.

The summary didn't include any calls for increased taxes on the wealthy, a proposal some have called for as an answer to the proposed cuts Cuomo has said are needed because of the precipitous revenue shortfalls predicted as an outcome of the pandemic.

Sen. John Liu, D-Queens, told Law360 on Monday that while he generally supports revenue measures to fund education and health care, the breadth of the revenue shortfalls caused by coronavirus response measures meant the federal government needed to help the state.

"There's no way we can tax our way out of this deficit. So what's clearly needed is follow-up assistance from the federal government," Liu said. "And we would be negotiating against ourselves if we enact huge tax increases now only to potentially reduce the amount of federal aid we could get."

But Sen. Alessandra Biaggi, D-Bronx, said via Twitter on Monday that raising taxes on the wealthy was needed to fund pandemic responses and opposed making cuts to Medicaid. She was joined in an open letter expressing her position by Sen. Julia Salazar, D-Brooklyn, and U.S. Rep. Alexandria Ocasio-Cortez, D-N.Y.

"The only way out of this crisis is by increasing taxes on our wealthiest residents, to ensure NYS raises the revenue we need to fight this pandemic together," Biaggi said.

Justin Flagg, a spokesman for Sen. Liz Krueger, D-Manhattan, who is sponsoring a cannabis taxation and legalization bill that differs from Cuomo's proposal, told Law360 on Monday that he had not seen the Senate budget summary but he wasn't surprised it omitted cannabis legalization. He pointed to a previous statement from Krueger that if cannabis legalization can't be achieved during a public health and fiscal crisis, it was better to wait so the measure could be debated when the crisis is over.

"Nothing is done until it is done, but the senator has said previously that the governor's staff essentially took marijuana off the table weeks ago," Flagg said. "She has always said that it's important not just to get legalization done, but to get it done right."

Friedfel said the governor's proposal for cannabis legalization and taxation would not produce significant revenue for more than a year, so it wouldn't be a way to close this year's budget gap.

AnnMarie Costella, a spokeswoman for Sen. James Sanders, D-Queens, said the budget process was in a "very fluid situation" as of Monday afternoon.

E.J. McMahon, research director for the fiscally conservative Empire Center for Public Policy, told Law360 that the short-term borrowing proposal from the governor wasn't a surprise because of the change in state tax deadlines. But he said the state Senate's willingness to go along with extending the state's film tax credit program, especially during a crisis, showed how sacrosanct the program was.

"We could now be looking at a multiyear economic slump more severe than anything since the Great Depression, with millions in financial distress, and the idea of giving away more money to film and TV producers is less defensible than ever," McMahon said.

"These subsidies are giveaways to businesses that cost taxpayers hundreds of millions of dollars while doing next to nothing to create jobs," Kaehny said. "The governor cannot claim to protect the state's taxpayers while giving away enormous amounts of New York City tax dollars."

Assemblyman Edward Ra, R-Franklin Square, told Law360 on Monday afternoon that formal budget proposals had not yet been introduced.

"It's really open-ended," Ra said. "We're waiting to see budget bills and hoping that in the near future, that we can start debating and voting on budget bills, but as of right now we're just waiting."