Law360 (July 11, 2022, 6:33 PM EDT) -- New York Chief Judge Janet DiFiore, who said Monday she plans to resign at the end of August, is currently under investigation by the state judicial ethics watchdog, according to documents obtained by Law360 and a person familiar with the matter. 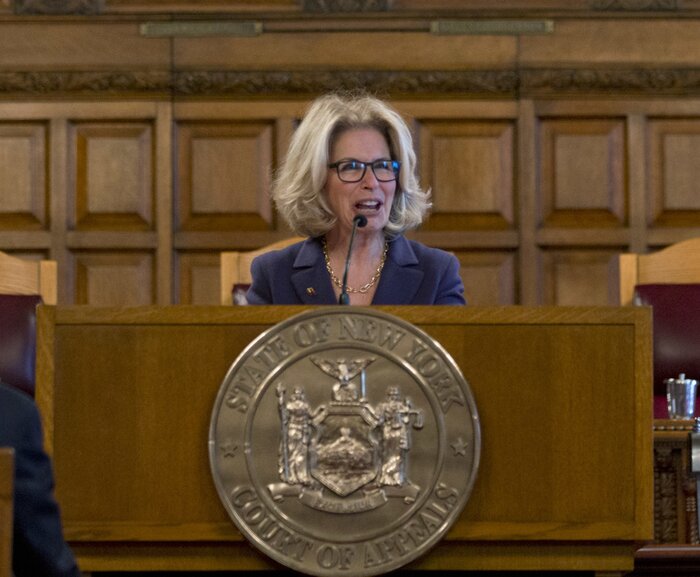 The New York State Commission on Judicial Conduct has been investigating New York Chief Judge Janet DiFiore for allegedly interfering in the disciplinary hearing of the New York State Court Officers Association president, who is a frequent critic of the chief judge. (AP Photo/Mike Groll)

The New York State Commission on Judicial Conduct has been investigating Judge DiFiore for allegedly interfering in the disciplinary hearing of Dennis Quirk, who is the president of the New York State Court Officers Association and a frequent critic of the chief judge.

In August 2021, Judge DiFiore wrote an ex parte letter to the hearing officer, Phyllis Orlikoff Flug, asking her to punish Quirk, according to a copy of the letter obtained by Law360. Judicial ethics canons generally prohibit judges from using their titles to influence an ongoing proceeding for personal gain.

Quirk "exhibits no remorse," Judge DiFiore wrote to Flug. "These patent realities require that you use every means at your disposal to address this incident and deter future misconduct by respondent."

"I implore you to use your authority wisely to uphold the values of our entire court system," Judge DiFiore said.

Flug, a retired judge, told Law360 she forwarded the letter to the Commission on Judicial Conduct shortly after receiving it. Flug said she spoke directly with Robert Tembeckjian, chief counsel for the commission, who told her the commission would investigate.

The commission does not comment on active investigations, but a person familiar with the inquiry confirmed that Judge DiFiore was under investigation at the time she announced her resignation on Monday.

"She should know better as a judge," Quirk said.

Judge DiFiore did not give a specific reason for her decision to resign Monday, saying only, "It is time for me to move on to the next chapter in my professional life."

In response to inquiries from Law360, state court spokesperson Lucian Chalfen said Judge DiFiore's resignation was unrelated to the investigation.

Quirk's disciplinary hearing stemmed from his actions following a New York Post story noting that Judge DiFiore had ordered an "independent review of the New York state court system's response to issues of institutional racism" after receiving a complaint about the union leader's alleged conduct toward Black court officers.

Quirk responded by sending an email to Judge DiFiore in which he suggested he'd respond to the spread of "false rumors," according to documents in a related dispute in state court over whether Judge DiFiore should testify in the disciplinary hearing.

"Lets [sic] see [how] you like the online articles about your relationship with a police officer with ties to organized crime while you were married posted all over every Court Building in NYS," he said, according to the court documents.

The email was subsequently referred for potential disciplinary action.