Law360 (May 27, 2021, 7:57 PM EDT) -- New Hampshire's Democratic U.S. senators Thursday backed legislation to prevent states from taxing telecommuting workers without a physical presence in their borders, a push that comes as the U.S. Supreme Court weighs whether to take a challenge to the practice. 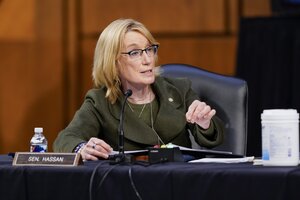 New Hampshire Sens. Maggie Hassan and Jeanne Shaheen threw their support behind the Multi-State Worker Tax Fairness Act, sponsored by Hassan and Sen. Richard Blumenthal, D-Conn., arguing the legislation would stop other states from taxing New Hampshire residents who telework for companies based in other states. The bill would make it illegal for states to impose income tax on employees who work remotely for an out-of-state employer.

"Granite Staters living and working in New Hampshire shouldn't have to pay another state's taxes, it is as simple as that," Hassan said. "Yet with the expansion of remote work during the [coronavirus] pandemic, we've seen states attempt to infringe on Granite Staters' rights."

Sydney Petersen, a Hassan spokeswoman, told Law360 that the bill is a "major priority" for the senator, who will work with her colleagues to gain support.

The justices are considering whether to take up New Hampshire's complaint against Massachusetts. In January, the justices sought the opinion of the U.S. government before deciding whether to hear, as a matter of original jurisdiction, the complaint of one state against another.

Massachusetts' temporary rule, put in place to address how it would tax nonresident workers employed by Massachusetts companies who are working from home during the pandemic, is similar to "convenience of the employer" sourcing rules used in states such as New York. Under the convenience-of-the-employer rule, days worked remotely can generally be treated as if they were office days.

After the acting solicitor general weighed in against New Hampshire's challenge, Shaheen and Hassan criticized the position.

Hassan said the Biden administration had taken the "wrong position" and the Supreme Court must hear the case. Shaheen said she was disappointed by the administration and said the Massachusetts policy is unconstitutional.

"Many Granite Staters have been working remotely during this pandemic to protect the health of their families and communities, and they should not be penalized for it," Shaheen said. "I'm glad to partner with this group of lawmakers on this effort to ensure that New Hampshire workers are protected from opportunistic out-of-state taxing authorities."

Rep. Chris Pappas, D-N.H., who will sponsor a companion bill in the House of Representatives with Rep. James A. Himes, D-Conn., said Thursday he was also disappointed in the position of President Joe Biden's administration. He said it further underscores "the need for a permanent, legislative fix."

The White House didn't immediately respond to requests for comment.

Similar bills in Congress have been introduced for years but have gone nowhere. The Supreme Court has declined in the past to hear cases on the convenience-of-the-employer rule. But because of the pandemic, many more employees have worked from home or outside their traditional offices since 2020, highlighting the interstate tax issues of such arrangements.

The Massachusetts policy and the solicitor general's brief may make it unlikely the justices will accept the case but could break the impasse in getting such bills passed, according to Richard Pomp, a tax professor at University of Connecticut School of Law. Congress has an opening to reinstate the status quo when it comes to the taxation of nonresidents while bringing predictability and stability into the law, he said.

"Congress should slap down the attempts by states to exploit the pandemic for their parochial revenue needs with unprecedented approaches," Pomp said.

But Darien Shanske, tax professor at University of California, Davis School of Law, told Law360 any codification of a physical presence rule would be "retrograde." He cited a recent paper he wrote in which he argued against a physical presence rule, but it could be appropriate for states to apportion income from individuals similar to businesses as remote work becomes more common.

Andrew Moylan, executive vice president of the National Taxpayers Union Foundation, told Law360 that while such bills have been introduced before, the issue has taken on a higher level of importance because of the Supreme Court case. He noted the measure could hurt the coffers of New York, whereas many as 400,000 New Jerseyans have worked from home during the pandemic period but paid billions of dollars to New York. That New York is the home of Senate Democratic Majority Leader Chuck Schumer is significant, Moylan said.

"The ultimate question is, what is Chuck Schumer willing to allow?" Moylan said.