By Khorri Atkinson
Law360 is providing free access to its coronavirus coverage to make sure all members of the legal community have accurate information in this time of uncertainty and change. Use the form below to sign up for any of our weekly newsletters. Signing up for any of our section newsletters will opt you in to the weekly Coronavirus briefing.


Law360 (May 5, 2021, 10:04 PM EDT) -- A D.C. federal judge on Wednesday vacated the U.S. Centers for Disease Control and Prevention's nationwide moratorium on evictions that aims to protect renters facing hardship in the wake of the pandemic, ruling the agency exceeded its statutory authority. 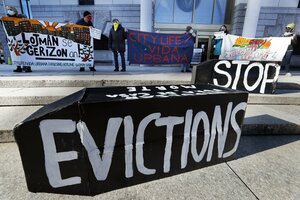 A D.C. federal judge ruled Wednesday that the CDC exceeded its statutory authority with its nationwide moratorium on evictions, which was put in place last year and had recently been extended through the end of June. (AP Photo/Michael Dwyer)

U.S. District Judge Dabney L. Friedrich said in a 20-page order that Congress did not express a clear intent to grant the CDC such sweeping authority under the Public Health Service Act. The nationwide eviction ban, first put in place by the Trump administration, was recently extended until June 30.

This ruling is a win for a group of realtors and property owners who lodged an expedited request for summary judgment against the CDC. But mere hours after the ruling, the U.S. Department of Justice told the judge in a filing that the government will appeal her decision to the D.C. Circuit.

"In the department's view, that decision conflicts with the text of the statute, Congress's ratification of the moratorium, and the rulings of other courts," Boynton said. "The department has already filed a notice of appeal of the decision and intends to seek an emergency stay of the order pending appeal."

An attorney for the plaintiffs did not immediately reply to a request for comment.

In Wednesday's order, Judge Friedrich said the court recognizes that COVID-19 has created a serious public health crisis with unprecedented challenges for public health officials and the country. The pandemic, she added, "has triggered difficult policy decisions that have had enormous real-world consequences. The nationwide eviction moratorium is one such decision."

"It is the role of the political branches, and not the courts, to assess the merits of policy measures designed to combat the spread of disease, even during a global pandemic," Judge Friedrich wrote. "The question for the court is a narrow one: Does the Public Health Service Act grant the CDC the legal authority to impose a nationwide eviction moratorium? It does not. Because the plain language of the Public Health Service Act … unambiguously forecloses the nationwide eviction moratorium, the court must set aside the CDC order."

The ruling comes almost a week after oral arguments in the case, during which Judge Friedrich expressed skepticism toward the CDC's authority to impose an eviction moratorium under the PHSA, first passed in 1944, to limit human behavior.

The slice of federal statute most at issue is Section 361 of the PHSA, where the CDC garners its isolation and quarantine authority. It empowers the agency to take certain measures to keep communicable diseases from being brought into the country and from being spread between the states.

That's exactly what the CDC said it was doing when it issued a moratorium on evictions back in September, which has since been extended several times, once by Congress and twice by the CDC itself. But a group of realtors and property owners insisted that the agency didn't have the power to do so.

When Congress originally granted the temporary extension, Judge Friedrich said it acknowledged that the CDC issued its order pursuant to the PHSA, but did not, however, expressly approve the agency's interpretation of the law or provide the agency with any additional statutory authority.

"Instead, Congress merely extended the CDC order for a limited 30-day duration," the judge said. "Because Congress withdrew its support for the CDC order on January 31, 2021, the order now stands — and falls — on the text of the Public Health Service Act alone. ... The national eviction moratorium in the CDC order is unambiguously foreclosed by the plain language" of the PHSA.

The CDC's order has been facing a wave of legal challenges across the country. Litigation has been brought by landlords, property owners and trade associations pushing to recover properties from nonpaying tenants, and at least 8.8 million households find themselves behind on rent more than a year into the pandemic.

Experts have told Law360 that district courts' wide-ranging legal interpretations of the constitutional and statutory claims brought against the moratorium are leaving state courts with inconsistent guidance on how to handle eviction cases. This has left the moratorium's enforcement up to each individual judge's discretion.

The challengers are represented by Brett A. Shumate of Jones Day.

The CDC is represented by Leslie Cooper Vigen of the U.S. Department of Justice's Civil Division.

The case is Alabama Association of Realtors et al. v. U.S. Department of Health and Human Services et al., case number 1:20-cv-03377, in the U.S. District Court for the District of Columbia.

Update: This story has been updated with comments from the DOJ, and to note the agency's plans to seek a stay of the ruling and to appeal.