Law360, London (June 4, 2020, 10:49 AM BST) -- Germany's ruling coalition said it is temporarily cutting the country's value-added tax to 16% from 19% from July as part of a broader economic stimulus package to help the country recover from a steep drop in output caused by the COVID-19 pandemic. 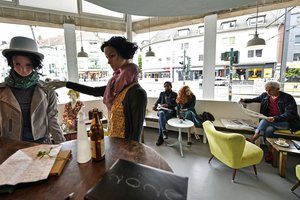 At a cafe in Essen, Germany, last month, mannequins were used as placeholders to help customers maintain distance from each other. Under an economic stimulus package, Germany's value-added tax on restaurant meals, already reduced, will be cut even further. (AP)

The change is due to last until the end of the year. The move follows a decision taken earlier in the crisis to cut the value-added tax for restaurant meals. Wednesday's decision means that the tax on restaurant meals will be even lower, given that Germany's reduced rate for VAT, which includes restaurant meals, will go from 7% to 5%, the finance ministry confirmed to Law360 on Thursday.

Speaking at a press briefing on Wednesday in Berlin, which was webcast, Finance Minister Olaf Scholz said there is an "urgent" expectation that companies should pass on the lower tax costs to customers and clients rather than pocketing the extra money themselves.

The VAT cut is likely to give a support to consumer spending, but having VAT return to normal next year might be too soon, critics say.

"Experience from other countries, such as the U.K. during the financial crisis, suggests that while this will indeed encourage consumers to spend more, they will reduce their spending significantly once the tax cut expires at the end of 2020. It's unlikely the crisis will be over by then," said Clemens Fuest, the director of Germany's Ifo Institute, in a statement.

Tax experts also say that other countries might take similar measures to help boost their economies in light of the sharp economic hit that countries worldwide have faced because of measures to stop the health crisis. The European Central Bank said Thursday, in its quarterly forecast, that it expects economic output in the 19-country eurozone to decline by 8.7% this year before growing 5.2% next year.

"Germany has moved now because it's coming out of lockdown, so now consumers need a fiscal nudge to spend," said Richard Asquith, vice president of global indirect tax at Avalara Inc., a tax-filing software company. "I'd expect more like this."

The cut is part of a package priced at €130 billion ($146 billion) over this year and the next, which the government hopes will help the country bounce back from a steep decline in economic activity. Economies and societies across the world have shut down to combat the spread of the coronavirus, which causes the disease COVID-19.

The package also includes an increase in the amount of money that companies can claim back on last year's taxes to offset losses this year. The package raises this limit to €5 million per taxpayer, from the previous €1 million.

Some economists said that the time span for the carrybacks should also have been extended.

"Too bad that the return period has not been extended to 2 years, especially for small companies," Dominika Langenmayr, a tax economist at the Catholic University of Eichstätt-Ingolstadt in Germany, said on Twitter.

Update: This story has been updated with more details about Germany's announcement and comments from Fuest, Asquith and Langenmayr.