By Douglas Litvack and David Maas
Law360 is providing free access to its coronavirus coverage to make sure all members of the legal community have accurate information in this time of uncertainty and change. Use the form below to sign up for any of our weekly newsletters. Signing up for any of our section newsletters will opt you in to the weekly Coronavirus briefing.


Law360 (September 10, 2020, 5:11 PM EDT) -- After a few-year hiatus, the Federal Trade Commission heads back to a federal courthouse on Sept. 14, seeking to enjoin the merger of two hospital systems, Thomas Jefferson University's health system and the Einstein Healthcare Network.

FTC v. Thomas Jefferson University will be the first litigated hospital merger since one of the FTC's commissioners promised to closely scrutinize all hospital transactions.[1] It's also the first time the FTC has challenged a hospital merger based on alleged harm to a product market of inpatient rehabilitation services.

The parties announced their plans to merge back in 2018.[2] Almost exactly two years after the parties signed their definitive agreement, and two-and-half after signing a letter of intent, the deal remains in regulatory limbo.

The parties' pretrial briefs highlight a mix of issues — some old, some new — that will be of interest to hospitals, health systems and many other parties considering mergers.

Jefferson Health is a much larger health system, with 11 general acute care hospitals. Jefferson's hub is its academic hospital associated with Thomas Jefferson University. Among its other hospitals is a 665-bed Abington Hospital, which is in Montgomery County and, according to the FTC, a close competitor of Einstein's.[4]

The FTC's case[5] challenges the merger based on alleged harm in general acute care hospital services in two areas: the Northern Philadelphia area and the Montgomery area.[6] The FTC also alleges that the transaction will cause harm to the market for inpatient rehabilitation services in the Philadelphia area.

The defendants dispute that the FTC has alleged viable markets and assert a number of defenses, notably (1) that substantial efficiencies outweigh any potential harm from the merger, and (2) that Einstein will be a weakened competitor without this deal so its current position overstates its future competitive significance.[7]

After slogging through a lengthy investigation, and now litigating the case during a pandemic, the parties are finally about to have a court resolve their differences. For those concerned that the fireworks of a trial might not dazzle as brightly via Zoom, worry not, Judge Pappert is planning to run a predominantly in‑person trial, with a mix of COVID-19-related precautions to promote public health and safety.[8]

1. How to Define Geographic Markets for Hospital Services in Urban Areas

The FTC learned from its hospital merger litigation losses in the 1990s and has developed the analytical tools to prove narrow geographic markets for hospital services. This case raises some of the same issues at the center of the last round of hospital merger litigation — that the FTC lost at the district court but ultimately won on appeal — about how to consider patient flow in assessing viability of geographic markets.

The defendants criticize both of the FTC's alleged geographic markets for general acute care for a number of reasons, including (1) that the FTC's economist used driving distances instead of driving times in defining markets; and (2) the FTC's economist calculates shares based on hospital locations as opposed to location of patients.

On the second point, the defendants' economist, Cory Capps — who's been the FTC's economist in prior hospital merger litigation — found that 70% of the patients who choose hospitals within the FTC's markets would choose one outside the market as an alternative. That certainly seems like a compelling fact for the defendants: If 70% of patients would go outside the FTC's proposed market for an alternative, couldn't a commercial insurer resist an attempted price increase by turning to those alternatives?

The FTC will also have to overcome some unfavorable optics with its proposed Montgomery area market, which looks even more gerrymandered — to include Jefferson's Abington but not third parties' hospitals right at the border — than the market in the FTC's recent case challenging a hospital merger in Chicago.[9] 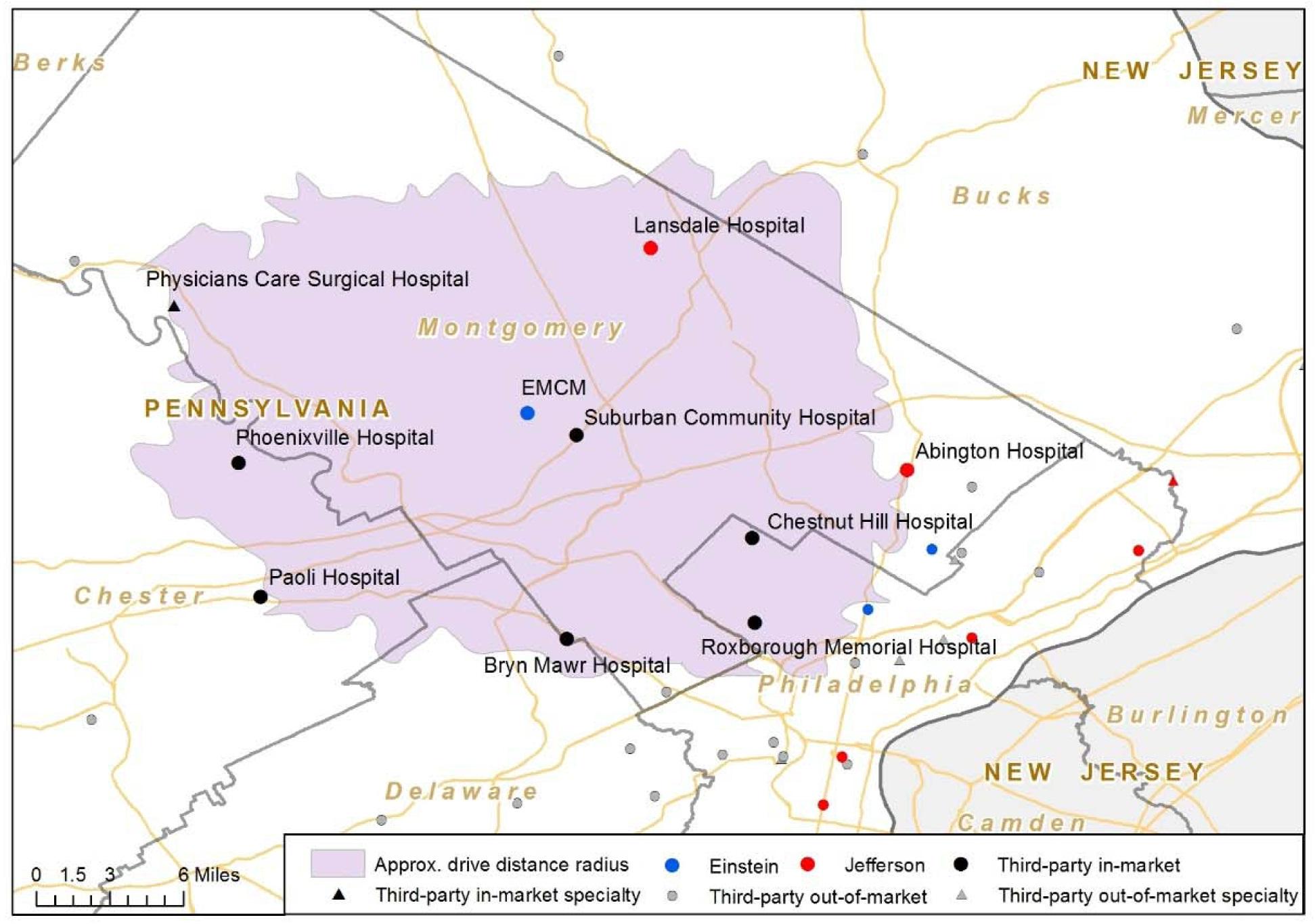 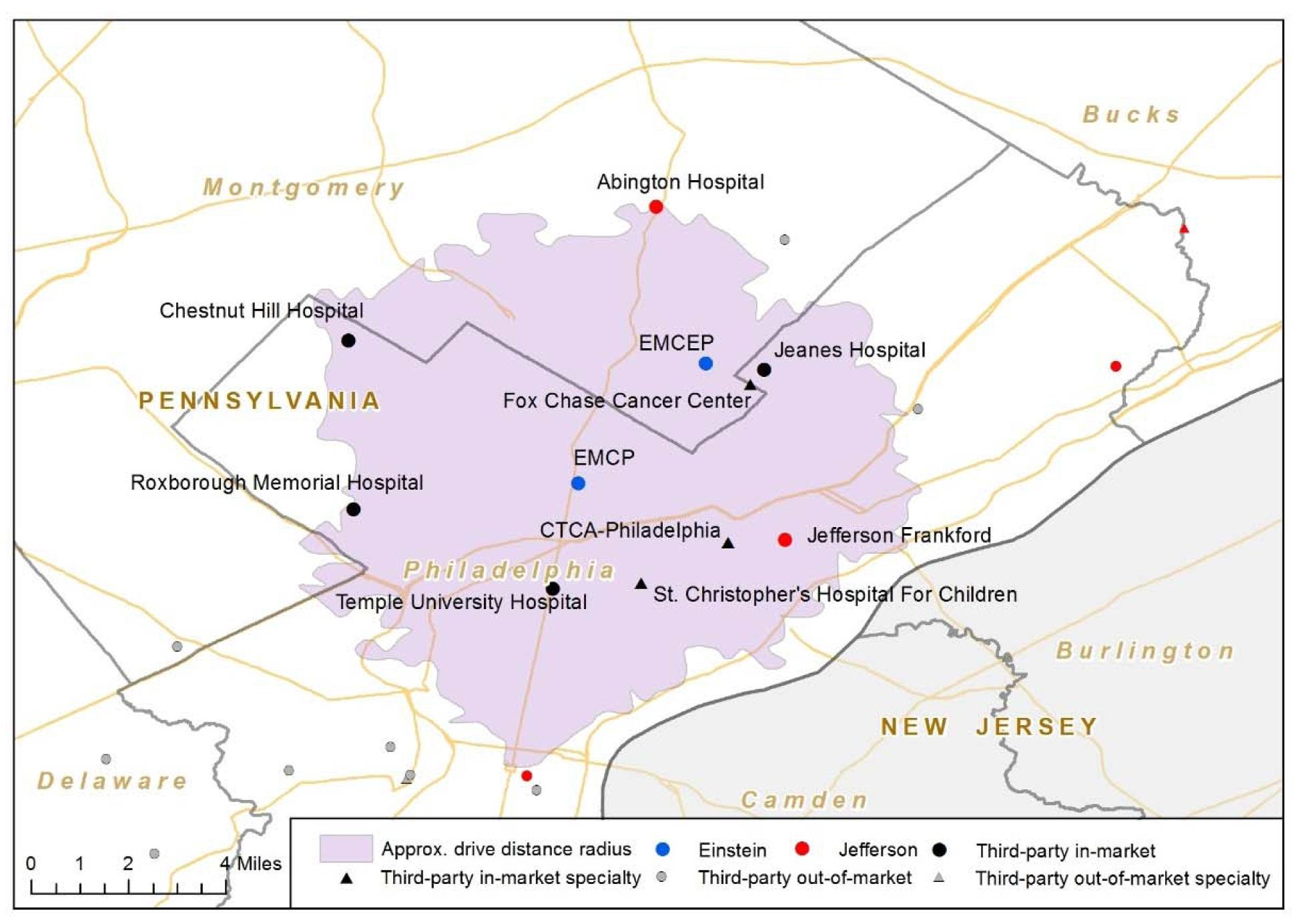 For those who felt unsatisfied with how patient flow and urban hospital market issues were handled by the appellate courts in the FTC's last two litigated hospital mergers, this case might usher in some clarity.[10]

The FTC also challenges the merger based on alleged harm to the market for inpatient rehabilitation facilities. It's worth noting that the FTC rarely challenges hospital mergers based on particular service lines, instead focusing its established cluster market of general acute care. The defendants assert that the FTC's proposed product market is flawed because it fails to include skilled nursing home facilities as a substitute for inpatient rehab facilities.[11]

While the reasonable interchangeability of skilled nursing homes and inpatient rehab facilities isn't something that's come up in prior cases — or dinner table conversations — it has a similar flavor to some of the disputes about whether academic medical centers compete with community hospitals — a topic it's hard to finish a meal without discussing. The outcome here could have implications for many health care services that compete for patients but operate under different regulatory conditions.

3. The Ever-Uncertain Efficiencies Defense in the Spotlight Again

If the parties' efficiencies were credited — no easy take no matter the audience and no matter the evidence — the deal could potentially bring a net benefit to consumers on the whole.The case appears to be teeing up the age-old question: Will an efficiencies defense ever actually allow parties to proceed with an otherwise anti-competitive merger?

The FTC continues to hedge in answering the question. The FTC/U.S. Department of Justice horizontal merger guidelines dedicate an entire section to the proper consideration of efficiencies in merger review.[15] The guidelines encourage parties to invest resources into developing an analysis of the efficiencies they expect to achieve through the transaction, because, according to the agencies, "[e]fficiency claims will not be considered if they are vague, speculative, or otherwise cannot be verified by reasonable means."[16]

Parties embark on what increasingly seems like a Sisyphean ordeal to prove their efficiencies to the agencies. And if they're unsuccessful, the FTC turns around and argues, as it does here, that efficiencies might not even be a viable defense.[17] The FTC also explains why, in its estimation, even if efficiencies were a viable defense, the parties cannot establish anywhere near the $58 million in verifiable, merger-specific efficiencies claimed.

There does appear some tension between the parties' claim that they will achieve $58 million in "clinical rationalization and integration savings" efficiencies — which sure sounds a lot like eliminating service lines at some facilities — and the parties' rationale for this transaction, "continued access to quality healthcare for its most vulnerable residents."[18] It will be interesting to see how the parties can walk the tightrope, promising access through this transaction at the same time as promising massive efficiencies through elimination of service lines at some sites.

4. Einstein Would Be Weakened Competitor Without Deal: Does That Matter?

Let's start with the easy answer: Yes. To prevent parties from proceeding with a merger, the FTC must show that "there is a reasonable probability that the merger will substantially lessen competition."[19]

The analysis of the competitive effects of a proposed transaction is by its nature an exercise in assessing future competitive conditions. This core inquiry should assess any likely changes in the market position of any competitors in a market. If a party — or a third party — would be substantially weaker in the future, that matters.

How the analysis of future competitive conditions fits into merger enforcement litigation isn't quite as easy to answer. No big surprise, the parties have different positions in their pretrial briefs. The FTC swiftly dismisses Einstein's poor financial condition as a nonviable "flailing firm" defense, which the FTC describes as the "Hail-Mary pass of presumptively doomed mergers."[20] That's a rather aggressive way to characterize a viable defense in the almost immediate aftermath of a federal court crediting the weakened competitor defense in clearing the T-Mobile-Sprint merger.[21]

The defendants lay out in some detail how they expect to rebut the FTC and attorney general's prima facie case by showing that the current shares overstate Einstein's future competitive significance. Perhaps the FTC is saving its cards on this one for trial. The defendants brief paints a pretty grim picture of Einstein: already downgraded to junk bond status and strapped for capital, with $200 million-$300 million of necessary capital improvements in the coming four years.[22]

The outcome of this case, like many other litigated hospital mergers, will likely be decided on the market-definition issues. But however the chips fall, health care providers around the country should come away with helpful guidance for the years ahead.

The future of many smaller hospitals, health systems and other health care providers are uncertain. The COVID-19 pandemic has accelerated some of the challenges these providers face, and mergers are one way parties look for a viable path forward. With the FTC following through on the promise to closely scrutinize all hospital mergers, it is more critical than ever to understand merger review before the agencies and in courts.


Douglas Litvack is a partner and David Maas is counsel at Davis Wright Tremaine LLP.

[5] The Pennsylvania AG's Office is challenging the case as well, but its pretrial brief is filed entirely under seal, while the FTC's and the Jefferson-Einstein joint briefs are all filed with minimal redactions. See FTC v. Thomas Jefferson Univ., et al., No. 20-cv-01113, Dkt. 136 (E.D. Pa. Sept. 4, 2020). It's hard to believe that every word of the AG's brief is confidential, but this isn't the first time and won't be the last that public visibility of key filings in merger litigation has been clouded by some combination of labyrinthine protective orders and zealous parties and nonparties seeking broad confidentiality protection.

[6] These defined terms in the case are identified in quotation marks here because the geographic areas the FTC maps out for these terms do not appear to be used anywhere outside this case.

[11] In addition to challenging the product market, the Defendants take issue with the FTC's geographic market of "the Philadelphia Area" for inpatient rehab services for various reasons (excluding key competitors just outside the defined area, etc.). Defendants' Brief at 14-16.

[17] FTC Brief at 20 ("The Third Circuit has never formally adopted the efficiencies defense and neither has the Supreme Court.") (quotations omitted).

, 439 F. Supp. 3d 179, 217 (S.D.N.Y. 2020) ("Evidence that a merging party is a 'weakened competitor' that cannot compete effectively in the future may serve to rebut a presumption that the merger would have anticompetitive effects.").