By Anna Sanders
Law360 is providing free access to its coronavirus coverage to make sure all members of the legal community have accurate information in this time of uncertainty and change. Use the form below to sign up for any of our weekly newsletters. Signing up for any of our section newsletters will opt you in to the weekly Coronavirus briefing.


Law360 (December 6, 2020, 8:02 PM EST) -- Pretrial detention in New York City is back on the rise after rollbacks to the state's nascent bail reforms went into effect this summer, worrying advocates about coronavirus cases spreading in dangerously crowded jails and the broader impact on the criminal justice movement.

In July, the state made more offenses and defendants eligible for bail by clawing back reforms that went into effect earlier this year. Those amendments have already led to a 7% to 11% increase in the city's pretrial jail population from what it would have been otherwise, according to a new report from the Center for Court Innovation.

"Judges have more opportunities to set bail and detain people who they couldn't have detained before the bail reform amendments," said report author Michael Rempel, director of jail reform at the Center for Court Innovation. "The current upward pretrial trend can be reversed if judges were to rely more on other options."

The center found that pretrial detentions — when people are held because they can't post bail or are remanded by a judge — jumped from 3,039 on March 18 to 3,365 by Nov. 1.

This increase followed a historic 30% drop in the city's overall jail population during the first wave of the coronavirus pandemic from March 18 to April 29, when fewer arrests were made and officials and defense attorneys worked to release people from detention centers where infections could easily spread.

But the city has already reversed more than half of these reductions in jail use, according to the center's report, attributing this spike to pretrial detentions from the bail reform changes, as opposed to an increase in those held on sentences or technical parole violations.

If this trend continues, the center predicts the city's jail population will return to levels not seen since the start of the pandemic by mid-February 2021.

"We're going to see an uptick of cases and we're still repopulating these jails," said Jenny Carroll, a professor at the University of Alabama School of Law. 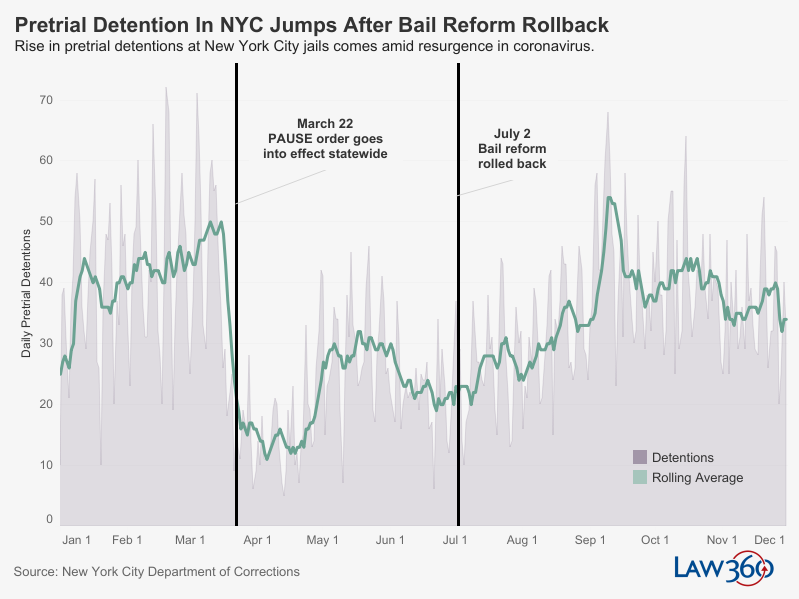 
Chris Boyle, director of data research and policy at New York County Defender Services, said there is a "sense of foreboding" among defense attorneys and advocates about a resurgence of the virus.

"There will be a panic," Boyle said.

The city doesn't see any indication that data shows bail reform changes have resulted in a significant increase in the jail population, instead citing increased activity with the reopening of the justice system when coronavirus cases fell this summer and a rise in admissions for violent felony offenses amid an uptick in shootings and murders. Courts have also reduced their use of bail alternatives.

Meanwhile, the average monthly pretrial admissions for violent felony offenses — which have been eligible for bail before and after the reform rollbacks — increased from 499 between January and June to 717 between July and October.

The city analysis also found more people are making bail than they did before the pandemic, but those who don't are spending more time in custody. The average time in custody rose from 198.4 days on Jan. 27 to 264.3 on Oct. 26.

"The numbers make clear what has driven the jail population's increase in recent months," said Dana Kaplan, deputy director of Close Rikers and Justice Initiatives at the Mayor's Office of Criminal Justice. "Violent felony jail admissions have outpaced all other jail admissions. Courts have increased their use of bail when setting conditions in felony cases, even as evidence suggests many people are making bail a short time after entering jail. And the lasting impact of COVID-19 on the court and justice systems have led to unavoidable slowdowns, resulting in those remaining detained being held for longer periods of time. So far, the July bail reform measures aren't similarly driving the jail population rise."

Almost nine out of 10 New Yorkers in jail at the beginning of November were incarcerated and awaiting trial without a conviction, according to the Center for Court Innovation's report. Delays in court proceedings because of pandemic restrictions will only make the problem worse.

"COVID-19 has shut down courts, it has also blocked access for attorneys to meet with their clients, it has blocked the ability of folks to track down witnesses, and prosecutor's offices have trouble meeting with defense attorneys," Carroll said. "Not only have we not seen trials, the plea system to negotiate people out of jails or detention has really collapsed."

Boyle said that New York County Defender Services is still intaking the same number of cases as in nonpandemic times, but only disposing about a third of them.

"You're going to have people sitting in pretrial detention for longer periods than they would be eligible for as a period of sentence," Carroll added.

That's why advocates said the bail reform changes were so troubling, particularly in a pandemic.

Three inmates have died from coronavirus and at least 1,500 Department of Correction staffers had confirmed cases since March, according to city data through Nov. 27. There were 229 currently incarcerated people with confirmed COVID-19 cases the week of Nov. 27, when there were about 4,800 people total in custody and more than 4,300 of them detained pretrial.

"It's not just the incarcerated people who are affected," said Taryn Merkl, a senior counsel at the Brennan Center for Justice at New York University School of Law. "It affects the entire community when there are hot spots."

Advocates said coronavirus starkly illustrated how mass incarceration is a public health crisis and the importance of bail reform overall.

New York passed legislation eliminating cash bail for most misdemeanors and nonviolent felonies last year, changes that began Jan. 1. These reforms were largely responsible for a 40% drop in pretrial detention between their passage in April 2019 and March 2020, according to the Center for Court Innovation.

But, caving to pressure from prosecutors and law enforcement, New York lawmakers rolled back some of those changes as part of the state budget passed this spring, making more offenses eligible for bail.

"The rollbacks were horrifying and unconscionable without a pandemic and are only more so in that context — it's the reason we fought against them," said Katie Schaffer, director of organizing and advocacy at the Center for Community Alternatives.

The eligibility rollbacks have empowered judges to detain more people. Those held pretrial on burglary in the second degree, for instance, increased by 70% between mid-March and Nov. 1, the Center for Court Innovation found.

Pretrial detentions declined 14% during the first weeks of the COVID-19 crisis between mid-March and late April, according to the center. But pretrial detainees now make up a larger share of those in jail, from 56% before the pandemic to 72% by Nov. 1.

Judges in New York aren't supposed to consider dangerousness when setting bail and must only look at a defendant's likelihood of returning to court or fleeing. But advocates say judges still use cash bail to detain people they think will commit more crimes.

The bail reforms also require judges to consider a defendant's financial circumstances before setting bail, though advocates said this isn't always the case. They say judges should rely more on supervised release programs instead of bail, as well as the city's release assessment tool that evaluates the likelihood that someone will return for court appearances.

"New York still has work to do in its bail reform effort," Merkl said. "There are still a wide swath of crimes that are eligible for cash bail in New York, which decades of research have shown is an unequal system that disproportionately impacts Black and brown folks and people who are in positions of poverty."

Some advocates are concerned the amendments to New York's reforms could tamp efforts to reform the criminal justice system, given the increases in pretrial detention already.

"The rollback certainly put a damper on that," Schaffer said. "But the power and the heart of the pretrial reforms remain a model for other parts of the country."