By Cara Bayles
Law360 is providing free access to its coronavirus coverage to make sure all members of the legal community have accurate information in this time of uncertainty and change. Use the form below to sign up for any of our daily newsletters. Signing up for any of our section newsletters will opt you in to the daily Coronavirus briefing.


Law360 (April 15, 2020, 7:42 PM EDT) -- Three patients who had tested positive for COVID-19 became the first to use the Air Force's "transportation isolation system." They were loaded Friday into biocontainment units inside a plane and flown nearly 4,000 miles from Afghanistan to a U.S. base in Germany.

The flight marked the first time the military has medevaced coronavirus patients since the pandemic began. And those patients were civilian government contractors.

Cmdr. Zachary Harrell, a U.S. Central Command spokesperson, declined to identify the contractors or the nature of their work, citing medical privacy concerns.

But their diagnoses could be a sign of what's to come. On war zone military bases across the Middle East, defense contractors may end up fighting a battle they didn't sign up for — one stemming the spread of COVID-19.

Many personnel on forward-operating bases are considered "essential," and their work wasn't interrupted by the Department of Defense's guidance last month recommending that even critical contractors work from home. But as the coronavirus spreads abroad, its implications for defense contractors are difficult to predict.

"The problem is just how novel this appropriately named novel coronavirus is," said David Robbins, a partner in Crowell & Moring LLP's government contracts group. "There's just no historical precedent there. Being nimble without precedent can be very hard."

Last weekend's transport was not so unusual, according to Alexander Major, a former U.S. Air Force intelligence officer who now co-chairs the government contracts practice group at McCarter & English LLP.

He said defense contractors often get medical airlifts out of war zones, and that "there aren't really a lot of ways out of Afghanistan right now." But the coronavirus might have elicited a quicker-than-usual response. 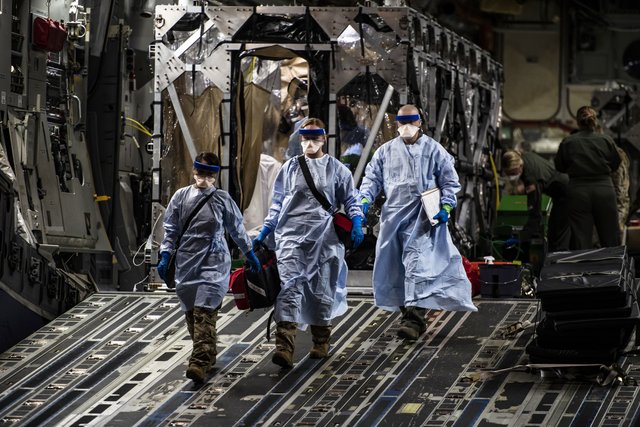 Aircrew disembarked Friday from a plane that flew three sick defense contractors from Afghanistan to a base in Germany. The trip marked the first military transport of COVID-19 patients since the pandemic began. (Department of Defense)


"For COVID-19, the issue is the uncertainty of the disease and the apparent ease with which it moves," he said. "I could see the base and regional commanders saying, 'Although we might have the ability to treat [these workers] locally, it's probably better to get them out of Dodge.'"

The desire to keep the disease from spreading on a war zone outpost was also likely in line with keeping the base "mission ready," Major added.

A factor further down the list may have been the government's liability under the Defense Base Act, a federal workers' compensation program that covers most defense contractors on overseas bases. Major said it might behoove the government "as the hirer of contractors" to facilitate treatment as efficiently as possible.

"Whenever you have any sort of injury under the Defense Base Act, you have to demonstrate a causal relationship between the occupational injury and the workplace," he said. "The fact they're somewhere that remote and that isolated and then come up with COVID-19 makes it pretty clear there's going to be that causal link."

But Eric Crusius, a partner at Holland & Knight LLP, said it may not be so clear cut. Depending on how long a contractor has been on base, it may be difficult to prove whether the infection occurred in the course of employment, he said.

And it's possible the cost of transporting infected contractors could be billed to a Defense Base Act insurance carrier if the military doesn't want to foot the bill, but that could lead to a contractual dispute.

The government tries to think of all possible contingencies when it drafts its contracts, he said, but it's unlikely that the Department of Defense anticipated the coronavirus, or the costly process of transporting infected patients, when hiring defense contractors.

"Because the DBA does not cover every type of activity overseas, it is possible that DOD may need to hash this out with individual contractors," he said. "This is unprecedented, what we're going through. I would be surprised if DOD sought the costs for transporting those contractor employees. But you never know."

The recent medevac — which used technology first developed in 2014 amid the Ebola outbreak — likely won't be the last time a contractor gets sick on a forward operating base. The military is planning accordingly. Cmdr. Harrell said that the transport signaled a new DOD policy.

"U.S. Central Command is working with U.S. Transportation Command to medically evacuate any confirmed cases of COVID-19 from Iraq, Syria and Afghanistan whenever it is deemed necessary and appropriate by the commanders and medical staff in those locations," he said.

The number of confirmed cases in those nations is relatively small. As of Wednesday, Syria had 33 cases, Afghanistan had 784 and Iraq had 1,415. But that could reflect the availability of testing in the region. Cases there began to exponentially grow in the last week of March and have not shown signs of tapering.

As defense contractors try to develop contingency plans, they are turning to their attorneys for help interpreting contracts that never anticipated a global pandemic.

A company might not need to replace sick workers, according to Crusius. If it has a firm, fixed-price contract requiring a certain number of hours, and the contractor can meet those commitments without bringing in new people, there's less incentive to fill empty positions, he said.

If the work does require filling the vacancies left by sick workers, Crusius added, the contract might give the company a finite amount of time to find new staff. The military may offer some flexibility in meeting those deadlines during COVID-19.

"That doesn't stop the DOD from going out and getting a replacement contractor to fill those roles, which of course the incumbent contractor wouldn't love," he said.

But finding new personnel could be challenging and could also present cost and scheduling challenges for contractors trying to uphold their end of the deal, Robbins said.

Yet another concern is whether the government will uphold its end of its contracts.

Should the spread of COVID-19 continue, commanders could make some difficult decisions about whether to triage bases, according to Tod Stephens, a former U.S. Army infantry officer who now works as a partner at Armstrong Teasdale LLP.

To slow the virus' spread among troops in a combat zone, a military commander could "evacuate or stop using contractor support for certain operations, or just order them to leave," Stephens said.

"In the back end, after those costs are incurred and contracts are turned upside down, there could potentially be some legal implications of the commander's necessary and probably correct actions," he added. "And that's going to be a mess, I'll tell you."

Smaller companies or businesses with smaller contracts could be left out of conversations that larger defense contractors may be having with U.S. military command now about how to continue working and whether workers might be ordered to leave the combat theater, Stephens said.

And those smaller businesses — squeezed by payroll and expenses — might have a claim down the road if they perceive they're being treated disparately.

"The law provides that the federal government as a customer is required to treat contractor companies and their employees equally," he said. "Contractors have to decide whether the government's decisions were fairly made and fairly implemented. If they weren't, they have to complain, because if they can't generate income from the government contracts they invested time and money in winning and performing, they'll have some very difficult decisions to make."

Attorneys specializing in government contracts said the most important advice they're giving their defense contractor clients is to communicate with their customers.

Sometimes contracting companies' managers will only communicate with a contracting officer, the administrative official who awarded their contract. But Stephens said, it's important that companies get in touch with their end-of-the-line clients, the deployed military officer overseeing their work. That person will know far more about the future of work on their base, he said.

"I'm advising my clients: Ensure that the operational side of communications is asking about and staying vocal about COVID-19's impact on the contract, specifically with regard to services to be performed and personnel to remain or to be deployed or redeployed," he said.

It's also important that contractors document any communications about delayed or incomplete performance on their end, according to Crusius.

"The DOD is showing a lot of grace right now in working with contractors," he said. "But they're not going to take it on faith that this is the reason for a performance delay unless it's obvious."