Law360 (March 25, 2020, 6:35 AM EDT) -- Negotiations between congressional leaders and Treasury Secretary Steven Mnuchin yielded a deal early Wednesday, clearing the way for lawmakers to a vote on a $2 trillion stimulus package designed to halt economic damage from the coronavirus outbreak. 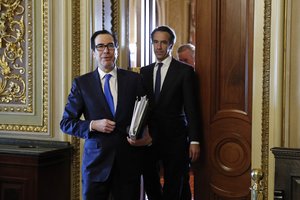 Treasury Secretary Steve Mnuchin at Capitol Hill in Washington, hours before the chamber prepares to vote on a coronavirus stimulus package. (AP)

Senate Majority Leader Mitch McConnell, R-Ky., said early Wednesday the chamber would vote later that day to pass the Coronavirus Aid, Relief and Economic Security Act, or H.R. 748, which reflects days of negotiations between congressional lawmakers and officials from the administration of President Donald Trump.

The legislation has stalled in the Senate since Friday while Republicans and Democrats haggled over proposals for unemployment benefits for workers, financial aid to states and hospitals and tax breaks for small businesses and large employers.

"At last we have a deal," McConnell said on the Senate floor. "After days of intense discussions, the Senate has reached a bipartisan agreement on a historic relief package for this pandemic."

Senate Minority Leader Chuck Schumer, D-N.Y., also speaking early Wednesday, said one of the last matters hammered out was $150 billion set aside for states and localities whose tax revenues would be affected by moving the federal tax filing date from April 15 to July 15. Since many states align their filing dates with the federal government, a three-month delay would cause a shortfall in state revenues.

The bill would also authorize what Schumer called "unemployment compensation on steroids," such that every American laid off during the crisis would have their salaries paid and furloughed workers would see benefits continue.

Negotiators also agreed to appoint an inspector general and a congressional oversight board to scrutinize grants and loans made by the U.S. Department of the Treasury to businesses to help address the impact of the COVID-19 virus, Schumer said.

House Speaker Nancy Pelosi, D-Calif., told reporters Tuesday she hoped to pass the legislation by unanimous consent, thereby eliminating the need for hundreds of House lawmakers to return to Washington to vote.

The text of the bill was not yet completed early Wednesday, but its tax provisions were among the items that were settled earlier in the negotiations, as were the bill's limits on corporate stock buybacks and executive pay for airlines that receive grants or loans from the federal government in order to stay afloat, according to a senior administration official who spoke to reporters Tuesday on the condition of anonymity.

The bill would address some unintended consequences from the 2017 federal tax overhaul, the Tax Cuts and Jobs Act, such as fixing the so-called retail glitch by allowing retailers to immediately write off expenses related to physical improvements instead of depreciating them over the course of 39 years, according to a summary of the bill released by McConnell's office.

The bill would also provide that businesses can carry back losses from 2018, 2019 and 2020 for up to five years. In addition, net operating losses would temporarily not be subject to a taxable income limitation, meaning they could fully offset income.