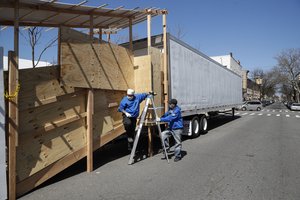 Workers place boards to block the view of the ramp into a refrigerated trailer serving as a makeshift morgue outside Wyckoff Heights Medical Center in Brooklyn, New York, on Monday. The COVID-19 death toll in New York City stood at 2,738 by 5 p.m. Monday. (AP)

'Week of Heartache' Lies Ahead

Reported U.S. deaths from COVID-19, the severe respiratory disease caused by the novel coronavirus, eclipsed 10,000 around midday Monday and were nearly at 11,000 late Monday night, according to Johns Hopkins University. The body count stood at 5,000 less than one week ago.

The number of confirmed infections in the U.S. has also nearly doubled since the start of April, closing in on 400,000 late Monday, compared to about 200,000 on the first day of the month. The rise has coincided with expanded testing, and the number of official cases unavoidably understates the true number of illnesses, although it's not clear by how much.

At a Monday night briefing, members of the White House's coronavirus task force stressed that casualties will likely continue their sharp ascent for at least another next week. But task force members also pointed to early signs that fatalities and new infections may be leveling off in hot spots such as New York, which has reported almost 5,000 deaths, roughly half of them in New York City, where a councilman on Monday tweeted about possibly needing to dig temporary mass graves.

"While this will be a week of heartache, it also is a week of hope," Vice President Mike Pence said.

The administration has warned that fatalities within a few months could reach 100,000 to 240,000. But officials on Monday expressed hope that the six-figure death toll — recently depicted as a best-case scenario — may ultimately be avoided by vigilant social distancing.

"If we work as hard as we can over the next several weeks ... we will see potential to go under the numbers that were predicted by the models," White House coronavirus response coordinator Dr. Deborah Birx said Monday.

The Office of Inspector General for the U.S. Department of Health and Human Services released a report Monday that said hospitals have experienced "severe shortages of testing supplies" and "widespread shortages" of personal protective equipment, such as masks, gowns and gloves.

The report was based on interviews from March 23-27 with the administrators of more than 300 hospitals in 46 states. In a statement Monday, the American Hospital Association said the report "accurately captures the crisis" facing health care providers.

But at Monday's briefing, Trump flatly dismissed the report by saying, "It's just wrong."

The president announced a few days ago the firing of the intelligence community's inspector general, who last year notified Congress of actions by Trump that led to the commander-in-chief's impeachment. On Monday, Trump questioned the motivations of the HHS OIG.

The HHS OIG lacks a confirmed leader and is being led by Christi Grimm, the office's principal deputy inspector general. Grimm has been with the HHS OIG for more than 20 years.

"I don't know the inspector general," Giroir said. "[But I'll] tell you one thing I have a problem with. If there was such a problem that she knew about, or he knew about, on March 23 and 24, why did I find out about the tests from them on the news media at 8 o'clock this morning? If there was a problem, I think you're ethically obliged to tell me where that is so we can interact with it."

Tesia Williams, a spokesperson for the HHS OIG, declined to comment late Monday on remarks by Trump and Giroir. But she added that "the report is not a review of HHS response to the COVID-19 pandemic."

"We collected the information as an aid for HHS and other decision-makers as they continue to lead efforts to address the public health emergency and support hospitals and other first responders," Williams told Law360 by email. "The report was provided to HHS on Friday, prior to publication, as part of our standard issuance process."

At Monday's briefing, the president — who has previously announced incorrectly that drugs have been formally approved to treat COVID-19 — said that "10 different therapeutic agents are in active trials and some are looking incredibly successful."

"We have to go through a process, and it's going to be a fairly quick process, I will tell you, based on what the [U.S. Food and Drug Administration] told me," the president said, offering no further details.

A drug treatment is expected to be available much sooner than a vaccine, which will likely take at least one year to develop, officials have said.

Separately, Giroir said Monday that the administration is racing to validate antibody tests that can tell whether someone was infected with the new coronavirus and therefore likely immune. Those tests could allow vast numbers of Americans, including nurses and doctors, to return to work without facing mortal dangers and also facilitate the reopening of schools and businesses — such as restaurants, hotels and clothing stores — that have broadly shuttered across the country.

"If things work out the way we believe they will, we will have millions [of antibody tests] on the market by May," Giroir said.

The tests will likely utilize a finger prick to obtain a blood sample. While Giroir indicted that time is of the essence, he also cited media reports Monday that said the U.K. — where Prime Minister Boris Johnson reportedly entered intensive care with a case of COVID-19 late Monday — ordered millions of antibody tests that turned out not to work.

"It is very important that they actually do what they say they do," Giroir said. "We're going to be very careful to make sure that when we tell you you're likely immune from the disease … [the] test really said that."