XFL Files For Ch. 11 After COVID-19 Shuts Down League

By Rose Krebs
Law360 is providing free access to its coronavirus coverage to make sure all members of the legal community have accurate information in this time of uncertainty and change. Use the form below to sign up for any of our weekly newsletters. Signing up for any of our section newsletters will opt you in to the weekly Coronavirus briefing. 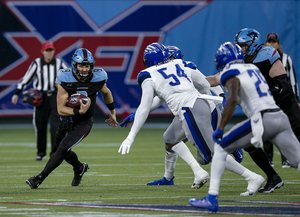 Dallas Renegades quarterback Philip Nelson carries the ball against the St. Louis BattleHawks during an XFL game on Feb. 9. The league filed for Chapter 11 bankruptcy protection in Delaware on Monday. (AP)

In a first-day declaration, Alpha Entertainment LLC, which was founded by McMahon in 2017, said cancellation of the league's final five weeks of play on March 12 cost it an estimated $27 million in ticket sales and game-day revenue.

That loss estimate didn't take into account "revenue from playoff games or the lost opportunities for sponsorship revenue and brand development," the declaration said.

"Unfortunately, the debtor was not immune from the disruption of the global COVID-19 pandemic that has shuttered much of the United States and forced every major American sports league to suspend, if not cancel, their seasons," Alpha President and Chief Operating Officer Jeffrey N. Pollack said in the declaration.

Pollack said the league's debut on Feb. 8 was met with fan excitement as "nearly 70,000 fans attended the opening weekend's games, and more than 12 million viewers tuned in on television."

Although the XFL argues the "market for football beyond the professional and collegiate leagues and teams" is strong, the pandemic wreaked havoc on the XFL's "all-too-short-experience."

"The impossibility of knowing when the pandemic would sufficiently abate and allow the league to restart only exacerbated the problems posed by the debtor's abrupt loss of revenue and unabated operating costs," the declaration said. "After considering all available strategic options, the debtor and its professional advisors determined that the best course to preserve and maximize the value of the debtor's estate is through a chapter 11 sale process."

McMahon will "personally provide rescue financing and fund a Chapter 11 process that will preserve and maximize the value of the debtor's estate for the benefit of its stakeholders and football fans everywhere," the declaration said.

McMahon is set to provide up to $3.5 million in debtor-in-possession financing so Alpha can pursue a Chapter 11 sale, according to a court filing.

Alpha's revenue in 2020 was roughly $14 million, while its net losses were $44 million, according to the declaration. Alpha has about $5.6 million in cash on hand as of Monday's filing.

In late March, Alpha executed a $7 million senior secured promissory note with McMahon "to provide the XFL with liquidity in the face of a shortfall."

On April 9, the principal on that note was increased to $9 million, according to the declaration. Alpha had no other secured debt and its unsecured debt includes an unspecified amount of money owed to "lessors or licensors, employees, and trade vendors," Pollack said.

The XFL has agreements in place for use of football stadiums and practice facilities for its eight teams, the declaration said. It also shares services with the WWE for "certain centralized corporate and administrative services, principally finance and accounting services."

Alpha terminated most of its 400 employees and its 500 football players last week, the declaration said.

McMahon founded Alpha in 2017 "to explore investment opportunities across the sports and entertainment landscapes, with a specific focus on professional football," Pollack's declaration said.

In 2018, McMahon announced he would start the league "to reimagine football for the 21st century," the declaration said.

The league's format called for a 10-week regular season with a postseason that was to include two semifinal playoff games and a championship game, Pollack said. The XFL's eight teams were the DC Defenders, the Dallas Renegades, the Houston Roughnecks, the Los Angeles Wildcats, the New York Guardians, the St. Louis BattleHawks, the Seattle Dragons and the Tampa Bay Vipers.

Pollack said the XFL's "most significant assets include the XFL brand and the trademarks and other intellectual property associated with the brand, including the league's 'For the Love of Football' slogan."

XFL's Chapter 11 has been assigned to U.S. Bankruptcy Judge Laurie Selber Silverstein with an initial hearing scheduled for Wednesday, according to court records.

The case is In re: Alpha Entertainment LLC, case number 1:20-bk-10940, in the U.S. Bankruptcy Court for the District of Delaware.