Law360 (April 24, 2020, 9:49 PM EDT) -- President Donald Trump's order banning green cards for overseas foreigners is aimed at protecting American jobs, but it may actually increase the number of employment-based green cards available while keeping out children and the elderly.

Trump's proclamation, signed Wednesday, will prevent noncitizens abroad from moving to the U.S. on new immigrant visas for the next 60 days, though the order could extend beyond that depending on economic conditions, according to the White House. Trump said it will "ensure that unemployed Americans of all backgrounds will be first in line for jobs as the economy reopens."

However, in reality, the order primarily limits categories of family-based immigration and as a result may actually end up making more visas available to would-be immigrants coming to the U.S. for job offers in the future if unused family visas roll over.

"Grandmas and kindergartners were two of the big groups that were kept out in the order," said Greg Siskind, a founding partner of immigration firm Siskind Susser PC. "What does that have to do with the job market?"

"Maybe they're taking jobs away from babysitters," he added jokingly, referencing the ban of green cards for American adults' parents.

The order may actually open up more slots for immigrants to move to the U.S. based on job offers next year.

If the employment-based visa cap isn't reached at the end of the year, those extra numbers can go toward family visas, and vice versa. 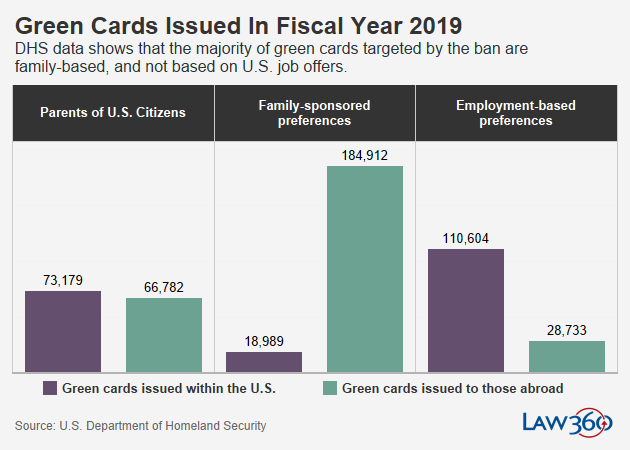 A 60-day pause on green cards overseas may do little to alter the makeup of U.S. immigration long term, but if the ban is extended, "it's going to actually remake the body of immigrants coming to the United States," said Loren Locke, an immigration attorney at FordHarrison and former consular officer.

In a normal year, this so-called visa spillover between the employment and family categories is relatively minimal, said William A. Stock of Klasko Immigration Law Partners LLP, former president of the American Immigration Lawyers Association.

The last time he saw significant spillover was in the wake of the 2008 recession, when jobs were hard to come by and many people were reluctant to move internationally.

According to an analysis conducted by the nonpartisan Migration Policy Institute, the proclamation could affect around 26,000 visas monthly, or 52,000 over 60 days. The order exempts broad categories of green card seekers, including foreign-born spouses and minor children of citizens, certain health care workers, members of the U.S. armed forces and foreign investors.

Last year, nearly half a million immigrants moved to the U.S. on green cards issued abroad, and more than 1 million people became permanent residents in total.

Boundless Immigration, a technology company that helps immigrants get green cards, found that 93% of family-based immigration in the capped categories, which include adult children and siblings of U.S. citizens and relatives of U.S. permanent residents, comes from abroad.

Conversely, roughly four times as many employment-based green cards went to immigrants becoming permanent residents from within the U.S. than to those applying from abroad in fiscal year 2019, according to data published by the U.S. Department of Homeland Security.

Dan Stein, president of the Federation for American Immigration Reform, said in a Thursday letter to Trump that the order "does not deliver" for millions of Americans who have lost their jobs during the pandemic and urged the president to limit temporary work visas as well.

"Quit placating to business interests and reliance on a corrupt, flawed system that harms American workers," he wrote.

Jessica Vaughan of the Center for Immigration Studies, another group that pushes to limit immigration, wrote in a Thursday blog post that the proclamation "does nothing to curtail immigration" and "will provide little relief to Americans."

The Trump administration could seek to avoid rollover into the employment-category by trying to fill up the cap with more green cards for immigrants already inside the U.S. But there may not be enough relatives in the U.S. to fill the open slots, attorneys said.

"The question is then, will the government be able to make up those lost visas with only people who are applying within the United States?" said Sarah Pierce, an immigration attorney and policy analyst at the Migration Policy Institute.

Green card seekers waiting in line can advance in the process based on the date they filed their initial petition, and the U.S. State Department releases these dates, known as priority dates, in its monthly visa bulletin to announce who can now move to the next step.

To fill up all of the family-based visa categories, the State Department would need to capture more green card applicants filing from within the U.S., to take the spots of the now-ineligible applicants who filed from abroad. The department could do this by moving up those priority dates and allow people who filed their petitions more recently to advance.

"If the State Department wants to make sure all the green card numbers get used up in these categories ... which is what Congress intended, then there are some levers that can get pulled to make that happen," Siskind said.

A State Department official told Law360 on Friday that the department considers "reasonable estimates of number use, and takes into account other legal and operational factors" when setting priority dates, and that "the department will continue to do so in the upcoming months based on the best information available at that time."

The department could run into additional challenges if they went that route. Pierce noted that if and when the green card ban was lifted, the department would then need to backtrack dates to avoid a rush of filings at once from everyone who missed their turn during the suspension.

"Even if it were legally possible, why would the Trump administration do that?" said Doug Rand, Boundless' co-founder who previously worked on immigration policy under the Obama administration.

The executive order, while largely ineffective in helping unemployed Americans get their jobs back, could be an effort to slash the immigration system in a way that Congress has yet to permit.

In 2017, Republican Sens. Tom Cotton of Arkansas and David Perdue of Georgia introduced a bill, known as the RAISE Act, that would have cut green card levels in half, including by scrapping the diversity visa program and making it harder for U.S. citizens to sponsor their foreign parents.

Trump officially endorsed the bill, saying it will prioritize immigrants "based on the skills they bring to our nation while safeguarding the jobs of American workers," though the proposal has gained no traction in Congress.

"This is, administratively, exactly what Tom Cotton's RAISE bill would have done legislatively," Stock said.