Law360 (May 15, 2020, 8:02 PM EDT) -- New benefits in the CARES Act that gave companies more flexibility to absorb recent losses are under fire from congressional Democrats, who claim they're a mistargeted corporate tax giveaway amid an unprecedented economic crisis. 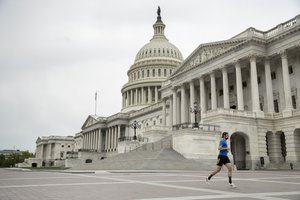 Democrats and Republicans in Congress continue to debate how much corporations should benefit from coronavirus relief efforts. (AP)

Opponents of the provisions, which attracted little attention before their enactment despite their $160 billion price tag, face long odds to reverse or eliminate them entirely. But the Democratic House leadership's legislation for the next round of federal relief outlines ways that the new changes to net operating losses could be scaled back or refined.


Meanwhile, defenders of the CARES Act claim the corporate tax changes are badly misunderstood and will help companies big and small weather the economic downturn triggered by COVID-19, the disease caused by the new coronavirus, and put them in a better position to spring back when the smoke clears.

Passed in March after the pandemic forced Americans indoors and the economy ground to a halt, the $2.2 trillion Coronavirus Aid, Relief and Economic Security Act

included several measures to aid struggling businesses. The legislation included the Paycheck Protection Program, which makes loans to small businesses that retain employees, as well as a controversial $500 million fund for the U.S. Treasury Department to make loans to distressed enterprises of any size.

But likely more valuable to most companies are the changes to the net operating loss rules, allowing them to use their profit shortfalls in 2020 to either obtain tax refunds on past years or reduce future tax payments. Unlike the loan programs, these benefits are available to all companies with few conditions — so long as they saw recent losses.

In many cases, the CARES Act reversed provisions of the Tax Cuts and Jobs Act

, passed only three years ago. The TCJA prohibited loss carrybacks, or the ability for companies to apply current losses to prior year profits. The CARES Act restored five-year carrybacks for 2020. The TCJA also put an 80% limit on loss carryforwards, which the act temporarily removed.

For noncorporate entities, the TCJA enacted a $250,000 limit on the ability of individual taxpayers to apply business losses to other forms of income. Losses above that limit must be used in future years, and the limit expires in 2025. The CARES Act removed this limit for 2020, which lawmakers said ensured that corporations and pass-throughs alike could take advantage of the new NOL flexibility.

Soon after passage, Democrats began to take aim at these provisions, questioning whether they would truly help companies in need.

Responding to a request from Sen. Sheldon Whitehouse, D-R.I., and Rep. Lloyd Doggett, D-Texas, the Joint Committee on Taxation released a distributional table showing that 80% of the benefits from removing the excess business loss limitation would go to those earning more than $1 million a year.

While other rules limit the use of losses against passive income, critics said some of these benefits might go to individuals or companies that are only experiencing losses on paper.

"Very often tax losses in fact have nothing to do with current economic losses," wrote Clint Wallace, a tax professor at the University of South Carolina School of Law, in a paper analyzing the CARES Act. "That is, a business may claim a tax loss for something that does not look anything like what most people understand to be loss."

Wallace cited deductions for new equipment purchases and depreciation of real estate as two examples of situations when an accounting loss might not mean that a venture was actually unprofitable.

Furthermore, the net operating loss provisions don't only apply for 2020. Because the loss window was extended for five years, companies with losses in 2019, 2018 or 2017 can take advantage of the new carryback rule as well. Corporations even have the ability to apply current losses to years when the tax rate was 35%, instead of today's 21% — effectively doubling the tax benefit. This is an invitation for creative tax planners to shift losses, critics claim.

"That encourages companies in loss positions to run up their losses in 2020. Accelerating expensing, taking deductions," said Steve Rosenthal, a senior fellow at the liberal-leaning Tax Policy Center and a former partner at Ropes & Gray LLP. "I used to be a tax arbitrager. This is a simple game."

Better-targeted rules could have helped companies and given relief to the unemployed, he argued.

"Congress is shoveling hundreds of billions of dollars in deductions to the highest-income Americans," Rosenthal said. "Giving away money is easy; giving money away sensibly is harder."

The Health and Economic Recovery Omnibus Emergency Solutions Act, or Heroes Act, proposed by House Democrats restores the excess business loss limit and makes it permanent. It also shortens the loss carryback window to 2018, eliminating the chances of applying losses to the 35% rate. It also prohibits the net operating loss carryback for companies with large amounts of stock buybacks or executive compensation.

"I think that is very harmful to businesses' ability to ride this crisis out and to rehire their workers," said Rep. Kevin Brady, R-Texas, the ranking member of the House Ways and Means Committee.

The Trump administration said it would veto the Heroes Act if it came to President Donald Trump's desk.

Others question the assumptions behind the backlash, and claim the critics are second-guessing lawmakers who were aiming to get money into the economy as quickly and broadly as they could.

"We're in the midst of a recession, companies are losing a bunch of money, so being able to get those quick refunds from carrybacks seems like a pretty well-targeted policy for firms that are hurting," said Kyle Pomerleau, a resident fellow at the American Enterprise Institute, a right-leaning think tank in Washington, D.C.

He also said the ability to deduct business losses against noneconomic income for individuals used to be an uncontroversial practice, akin to a corporation aggregating profits and losses across all its business units.

If anything, Pomerleau said, the problem arises from "gimmicks" the TCJA used to raise revenue and reduce the bill's overall cost.

Most of the net operating loss changes in the TCJA did not actually reduce the amount of deductions, but forced companies to spread them out, or put off using them until future years. This creates an increase in revenue for analysts at the Joint Committee for Taxation and the Congressional Budget Office, who use 10-year windows for budget estimates. But it doesn't necessarily mean the government will ultimately gain more revenue.

JCT estimated that the NOL changes will cost about $80 billion in 2020, but will gain much of that back in the following years, as companies will have fewer deductions to use against future income. Ultimately the provision costs $25.5 billion over 10 years, and the limits Democrats hope to add will only raise $7.9 billion, according to an analysis released Friday.

George Callas, a managing director for Steptoe & Johnson LLP and former Republican chief tax counsel to Ways and Means, said the TCJA was devised in a way that disadvantaged companies experiencing losses.

"The TCJA included a lot of pay-fors that disproportionately impacted loss companies," Callas said. "The economy had been booming for years, and Congress just wasn't thinking about a scenario where you have lots of companies with legitimate economic losses, and the impact those provisions would have."

Callas also said the distributional figures could be misleading. With restrictions on passive income, those who can take advantage of excess business losses are more likely to be struggling business owners than wealthy hedge fund managers.

Those could include owners who've seen a one-time gain from a sale, or who record income through a tax-sharing agreement with investors — "periodic millionaires" who don't earn that amount of income every year, Callas said. The figures also are a snapshot from January 2020, before coronavirus losses could be taken into account.

"At the end of the day, you can only benefit from this provision if you have substantial business losses," he said. "You cannot just be an investor. You can't just be a lobbyist with a salary. You have to be an owner in a business."

Despite the stark divide, some see reasons for optimism that the parties could reach an agreement to tweak and even enhance the loss provisions.

Garrett Watson, a senior policy analyst for the right-leaning Tax Foundation, advocated for "advance NOL deductions," or some form of payment to companies with losses that can't be deducted against prior profits. With restrictions to prevent abuse, NOL advances could put startups and companies with slim profit margins on equal footing with more profitable companies.

And they could be something to trade for some of the restrictions Democrats are seeking, Watson said. While he opposed shortening the loss carryback, which he said could interfere with companies currently filing for refunds, a limit to ensure that they are all deducted against the current 21% rate would be a reasonable compromise.

"I'm optimistic that there may be some way we can come to the table, and advance NOLs to those who need it while also addressing some of the unintended consequences of these NOL rules," Watson said.

While he agreed with the policy, Watson said he understood the critics' concerns.

"One of the balancing acts that policymakers have to consider is making sure it's broad, and timely, and well-targeted," he said.

Editor's Note: The paper analyzing the CARES Act was published by SSRN, which is owned by Elsevier Inc., a division of RELX Group, which owns Law360.