By Katie Buehler
Law360 is providing free access to its coronavirus coverage to make sure all members of the legal community have accurate information in this time of uncertainty and change. Use the form below to sign up for any of our weekly newsletters. Signing up for any of our section newsletters will opt you in to the weekly Coronavirus briefing.


Law360 (May 18, 2020, 4:30 PM EDT) -- Potential jurors called in from their couches, dining tables and offices Monday morning to a Texas state court insurance trial that appears to have been the first in the country to use the videoconferencing platform Zoom with jurors during the coronavirus pandemic. 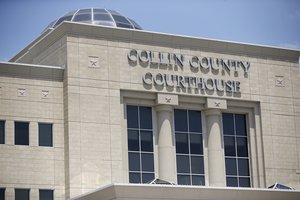 "For centuries, if you got jury duty, you've got to go to the courthouse for jury duty," Collin County District Court Senior Judge Keith Dean told potential jurors. "But this time, jury duty has come to you." (AP Photo/Tony Gutierrez)

The public got to observe the jury selection process handled by two Texas state court judges and three attorneys as 25 potential jurors were vetted. But the trial itself happened behind virtually closed doors because it was a summary jury trial that's part of the mediation process in a hail and wind damage dispute between State Farm Lloyds and policyholder Virtuwave Holdings LLC.

Collin County District Court Senior Judge Keith Dean, who presided over Monday's trial, reminded jurors that, despite the new platform, they were still in court and couldn't Google information or use their phones. He also said that at some points during the day, jurors may have to ask family members to leave the rooms they were in, just as if he would ask the public to leave the courtroom.

"For centuries, if you got jury duty, you've got to go to the courthouse for jury duty," Judge Dean said. "But this time, jury duty has come to you."

Collin County District Court Judge Emily Miskel, who was there for IT support only, acted as the gatekeeper to the conference call, letting jurors in one by one and asking for their names and what type of device they were using — which included phones, tablets and computers. The Zoom call was livestreamed on YouTube.

Of the 28 jurors summoned for duty Monday, only two didn't call into the Zoom meeting, Judge Miskel said. A third potential juror didn't participate because of having trouble connecting to the call.

Aside from that, there weren't many other technological problems, although one juror couldn't figure out how to rotate the camera from portrait to landscape mode. One juror caused a five-minute delay after taking a phone call that extended beyond the allotted break time. Both judges attempted to ask him to come back to the Zoom meeting, but his headphones were off, so the group had to wait until he hung up.

The summary jury trial set the stage for a Tuesday mediation between State Farm and information technology company Virtuwave, which claims State Farm breached the parties' contract and violated state insurance codes by failing to pay the correct amount for hail and wind damage to the company's property suffered in a March 2017 storm. Virtuwave is seeking more than $1 million from the insurance company.

In Texas, summary jury trials are used to allow both sides to feel out whether a trial or mediation is the best way to settle a dispute. Lawyers for each party present abbreviated cases and then hear from a group of jurors about how they would judge the evidence and what their verdict would have been. Because the summary jury trial is part of the mediation process, only the jury selection was public.

After the jurors were accounted for and before voir dire started, Judge Miskel instructed jurors how to change their screens from the "Brady Bunch view," which shows everyone who is participating in the call, to one that only shows the speaker's video. She urged the jurors to speak up if they had technological problems or questions.

Judge Miskel also split jurors into two groups using Zoom's breakout room function to make voir dire easier for the attorneys. While the attorneys questioned the first round of 12 potential jurors, the other 13 sat in a separate group, which was not monitored by either judge.

"This is as strange for us as it is for you," Matthew Pearson of Pearson Legal PC, told the potential jurors.

"How exciting is this to experience this for the first time in Texas and possibly the country?" Amy Stewart of Stewart Law Group PLLC, representing State Farm, asked before their questioning began.

During voir dire, the attorneys asked the potential jurors to raise their hands if they had questions or to show where they stood on certain issues. They would then call on specific jurors to explore their answers, just like in the courtroom. The entire voir dire process was completed in about 45 minutes.

Once the questioning was over, Judge Dean asked the attorneys to approach the bench — which required Judge Miskel to create a new breakout room for them to talk in. After a few minutes, they returned to the main Zoom meeting and announced they were happy to proceed with the 12 jurors on the panel.

Judge Miskel brought the other jurors back into the main meeting and dismissed them one by one, telling them to not hang up before she dismissed them from the meeting.

Texas' first jury trial comes just less than a month after the state charted a new path for bench trials during the pandemic. In late April, a Houston-area judge held a one-day bench trial to hear a dispute over roughly $96,000 in attorney fees stemming from an insurance case.

Since then, other courts have held virtual bench trials, but Texas seems to be the first state attempting a jury trial.

Not all Lone Star State judges are on board with the virtual trial idea. Eastern District of Texas Judge Rodney Gilstrap, who presides over one of the busiest patent dockets in the country, is preparing to hold in-person jury trials as soon as September.

The Office of Court Administration, which regulates the state courts, said in its most recent guidelines to judges that in-person jury trials should be postponed until at least June.

Virtuwave is represented by Matthew Pearson of Pearson Legal PC.

Correction: An earlier version of the story incorrectly identified which court Judge Gilstrap presides in. The error has been corrected.