Law360 (June 25, 2020, 8:06 PM EDT) -- The economic fallout from the novel coronavirus pandemic is likely to reverberate for years, shifting the international tax landscape as U.S. companies grapple with losses, legislation and other factors that could complicate planning, including intellectual property placement. 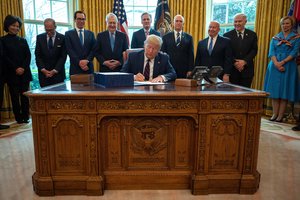 Provisions in the CARES Act, the $2 trillion coronavirus relief package that President Donald Trump signed in late March, could result in a loss of deductions for multinationals. (Getty Images)

The virus, which causes the respiratory disease COVID-19, has resulted in business closures around the world and immediate tax questions for multinationals that have taken financial hits, including how losses could affect their transfer pricing. Beyond these initial complications, businesses should expect longer-term international tax consequences resulting from the pandemic's economic impact.

Countries around the globe will be looking to refill their coffers, possibly with digital tax measures or an uptick in audits. Meanwhile, companies will have to consider how tax decisions, such as where to put their intellectual property, could be affected by changes to markets and by legislation resulting from the pandemic's ongoing economic effects.

Potential changes in tax policy — in addition to a company's loss profile, IP valuation and foreign tax credit position — are going to affect IP planning for the next few years, according to Enrica Ma, a partner at McDermott Will & Emery LLP.

"Companies suffering losses may not be thinking about additional planning for IP now," she said. "But I think the impact of the pandemic is not just on loss planning in 2020."

One of Congress' initial measures aimed at providing economic relief to businesses could result in a loss of deductions for multinationals.

— a $2 trillion package of measures meant to help millions of American workers and businesses weather the global pandemic. The law lets companies carry back losses from 2018, 2019 and 2020 for up to five years preceding each of those years, providing "critical cash flow and liquidity during the COVID-19 emergency," according to the Senate Finance Committee's summary of the legislation.

that prevented companies from carrying back net operating losses, or NOLs, to prior tax years. Now that companies can carry back NOLs, they risk losing the tax overhaul's deduction for offshore income that's immediately taxed in the U.S.

of the Internal Revenue Code, added by the TCJA, a company normally gets a 50% deduction from global intangible low-taxed income and a 37.5% deduction from foreign-derived intangible income, but only to the extent the company has taxable income that year.

"If you carry back an NOL, you may then lose the ability to get this deduction to reduce your GILTI or FDII," according to Craig Hillier, EY Americas international tax and transaction tax services leader. "The CARES Act was pushed through very quickly and it did not address the impact of the carryback on some of the provisions that came in with the Tax Cuts and Jobs Act."

Carrying back NOLs could also mean a company has no income against which it can take a foreign tax credit, and unused credits under GILTI don't carry forward, Hillier said.

He noted that companies have wondered whether they can get relief from the NOL carryback issue, "and it's an open question of whether the government is going to address it."

Companies dealing with financial losses may not be thinking about their intellectual property — such as patents, trademarks and trade secrets — but the current economic environment could lend itself to planning on that front.

Some businesses are expecting significant changes to their projected cash flow and projected sales — and their IP valuation could be impacted, according to Ma at McDermott.

"In the past, a company may think moving IP would be very costly if it is not able to structure a tax-free transfer," she said. "But now if they're in an industry where there's a big hit and valuation changed, then moving IP may not be that costly."

Even if there's still a taxable transfer of IP from one jurisdiction to another, companies are starting to think about whether they can use that as a strategy to generate income if they're expecting a loss, she said.

Tested loss, a term created under the GILTI provision, involves a corporate shareholder's basis in assets in a controlled foreign corporation, or CFC. Final GILTI regulations, issued in June 2019, clarified that a CFC with tested loss has no qualified business asset investment, or QBAI, under the measure's mechanics. Without any QBAI, a CFC won't get any related foreign tax credits.

If a company sees its IP value drop, it could carry out a taxable sale to trigger income to avoid tested loss in that jurisdiction, according to Ma.

"That may not have been a consideration before this pandemic," she said.

To help government coffers recover after the pandemic, some countries may move to tax corporate revenue tied to digital services their residents use.

A recent economic outlook report from the Organization for Economic Cooperation and Development noted that emergency measures in response to the virus outbreak — including those to preserve the income of workers and companies — and relaxed monetary policies have resulted in elevated government budget deficits. Public debt is set to rise to exceptionally high levels in many countries, according to the report, published June 10.

In response to this high public debt, the OECD suggested that countries consider environmental measures and more progressive tax systems in some cases, while coordinating to address the tax challenges of the digital economy. Ensuring that multinational companies pay a minimum tax "would strengthen revenue raising capacity and could be seen to contribute to fair burden sharing," according to the report.

Meanwhile, digital tax talks at the Paris-based organization recently seemed to reach a standstill when U.S. Treasury Secretary Steven Mnuchin sent a letter to European leaders on June 12 that pushed for a halt to negotiations, citing the coronavirus pandemic.

Paolo Gentiloni, the European Union's commissioner for taxation, responded to Mnuchin's letter by saying the bloc would move forward with its own digital tax proposal if talks at the OECD break down because the U.S. withdraws its support.

Now that the U.S. has asked for a delay, the question is whether European countries will pursue their own unilateral measures, according to Hillier at EY. For example, he noted that France had already enacted a digital services tax but had suspended collections while countries worked on an agreement at the OECD.

"The Europeans have shown a fondness for these sorts of taxes," he said.

For now, foreign governments aren't likely to open new examinations of multinationals, but audits could increase in the future as governments look to recover revenue.

Tax authorities around the world, including the Internal Revenue Service, have announced that they generally won't begin new audits, citing the coronavirus outbreak. Several countries — including Canada, Russia, Tunisia, Austria, France and Romania — have paused audits, according to a report published by the Tax Foundation in May.

"I think it's a little bit premature to say that foreign tax authorities have reacted to the COVID-19 crisis by stepping up the frequency of audits," said Pat Brown, an international tax policy leader at PwC.

However, he noted that an enormous amount of government spending has taken place over the past few months.

"Governments are going to be under greater revenue pressure," Brown said. "It is certainly a logical inference to draw from that, that there will be greater pressure on tax authorities to step up their audit activity."