Law360 (June 26, 2020, 1:20 PM EDT) -- Workers can take federal coronavirus leave to care for kids if the pandemic disrupted a demonstrable plan to send them to summer camp, even if they weren't enrolled when the virus hit, the U.S. Department of Labor said Friday in one of two new COVID-19 guidance letters. 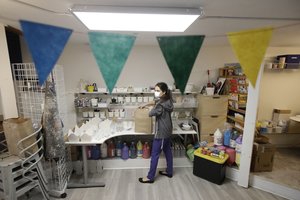 Yoissy Thomas, who had to cancel her San Francisco art lab's summer camp, prepares art kits sold through her website in April. The DOL said parents can take federal COVID-19 leave if they can show their kids were set to attend a camp that closed. (AP Photo/Jeff Chiu)

DOL Wage and Hour Division Head Cheryl Stanton detailed this and other criteria for determining child care leave eligibility under the Families First Coronavirus Response Act in a letter to agency officials investigating employers for possible violations. The law lets workers for small and mid-size employers take up to 10 weeks off at partial pay to care for kids whose summer camps aren't open.

Covered workers can take off if their child was already set to attend camp, but other "affirmative steps short of actual enrollment may also be sufficient," Stanton said.

The FFCRA makes private employers with fewer than 500 workers provide paid time off for several reasons tied to the pandemic, including if workers have to take care of kids who would ordinarily be at summer camp. Because many camps closed months ago, in some cases before parents enrolled their kids, it can be tough for investigators to tell whether a worker can take leave, Stanton said. Friday's letter clears up several questions stemming from this gray area.

Field investigators probing whether an employer unfairly denied leave under FFCRA should look for "evidence of a plan" for the child to go to camp or other evidence suggesting it's "more likely than not" the child would be at camp had it not closed due to the pandemic, Stanton said.

Evidence a worker enrolled their child in a now-closed camp or that the child previously attended the camp is "certainly sufficient" to entitle the worker to leave, but other evidence may also suffice, Stanton said. For example, if a child who only recently reached the minimum age to go to camp or moved to a new area is on a waitlist, that may do. However, "a parent's mere interest in a camp or program is generally not enough," Stanton said.

In another letter, Stanton said a school is considered "in session" under rules limiting minors' work hours during the school year if it is conducting virtual or distance learning, even if its physical facility has closed.

Under DOL regulations, 14- and 15-year-olds are limited to performing nonagricultural work for three hours on school days and eight hours on non-school days for a total of 18 hours per week when school is in session. When school is out, they can work up to eight hours a day and up to 40 hours a week.

Update: This story has been updated with additional information from the guidance letters.

Correction: An earlier version of this story misstated FFCRA's provisions. The error has been corrected.