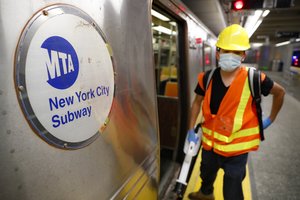 Transit interruptions and other measures meant to stop the spread of the coronavirus have wreaked havoc on the New York City region's economy. (AP)

The report by Partnership for New York City, a group of nearly 300 chief executives from the city's top companies, outlines how the novel coronavirus pandemic has affected the region. The report makes recommendations on how to try to stem the damage caused by measures meant to stop the spread of COVID-19, the respiratory ailment caused by the coronavirus.

"There is no more important measure for economic recovery in New York than for government to work collaboratively with private sector experts to determine whether and how to adjust the tax code to deal with budget deficits," the report said.

Contributors to the report include 14 consulting firms as well as other experts that were asked to examine the impact of the pandemic on the city and region, the partnership said.

It recommends that seven states in the Northeast put a moratorium on offering competitive economic development incentives. It also recommends consideration of property tax breaks, elimination of commercial rent tax on small and medium-size businesses and a review of new revenue options. In addition, the report says leaders should consider cutting utility rates paid by customers and equalizing assessments and rates for co-ops, condominiums and private homes.

The group also calls for ending the $10,000 cap on state and local tax deductions enacted through the Tax Cuts and Jobs Act

The group also said leaders should reconsider a 2013 report by  the New York State Tax Reform and Fairness Commission, which was created by Democratic Gov. Andrew Cuomo. That report offered several tax proposals, including reducing various corporate tax abatements to raise revenue and simplifying the tax code and other tax changes.

"Certain tax preferences and incentives should also be reevaluated for their efficiency and effectiveness in bringing economic activity to New York," the report said. "Eliminating specific preferences or credits could free up public resources to invest in modern operating systems, upgrade infrastructure and fill the budget hole left by COVID-19."

New York City's real estate tax system should also be revisited and changed to reduce the burden on rental housing, the group said, with savings going to tenants or toward the cost to improve properties. A report released in January recommended New York City change its byzantine property tax system and instead use a sales-based methodology to value some residential properties and assess all residential properties at full market value.

The report comes as the economic downturn caused by the COVID-19 pandemic is estimated to cost New York City and New York state $37 billion over the next two fiscal years, the report said. One of the first things leaders should consider is stabilizing the tax revenue base, according to the report.

"The reliance of the New York metropolitan region on personal income taxes is already higher than peer states at 59.3% of all revenues, compared to only 37.8% nationally, 47% in Connecticut and 40.9% in New Jersey," the report said. "On the other hand, New York receives a low share of its revenues from consumption taxes (particularly sales taxes) compared to other states."

However, the report also warns against raising taxes on the wealthy, arguing that while the top 1% of earners in New York account for 40% of state tax revenue, they're also more mobile than other parts of the population. Many of those high-earners have relocated amid the pandemic and could consider working remotely permanently if their taxes increase, the report said.

Legislative leaders this year have considered proposals to increase taxes on the rich, though Cuomo has generally shied away from providing support for them.

John Kaehny, executive director of the open government nonprofit Reinvent Albany, told Law360 on Monday that his group strongly agreed with the partnership's recommendation for a "subsidy cease fire" between the Northeastern states and that corporate tax subsidies be sharply reduced.

"That said, we have to wonder how serious this proposal is since no specific subsidies are mentioned, and the partnership has not made any public effort to reduce the billions in subsidies that benefit its members, including 421-a tax abatements and NYC REAP and ICAP," Kaehny said.

The former 421-a tax abatement program, now known as Affordable Housing New York, is applied automatically and was enacted in the 1970s to spur residential development in New York City by holding real estate taxes steady for certain periods during and after construction. It provides relief from the heavier tax burden that would otherwise be felt due to a property's increased valuation. The Industrial and Commercial Abatement Program, or ICAP, and the Relocation and Employment Assistance Program, or REAP, are two New York City tax abatement programs.

The offices of state legislative leaders and Cuomo didn't immediately respond to requests for comment.