The briefing saw Trump dial back his rosy assessments of the pandemic's severity and finally deliver clear support for his own administration's advice that face masks can help slow the virus' spread. 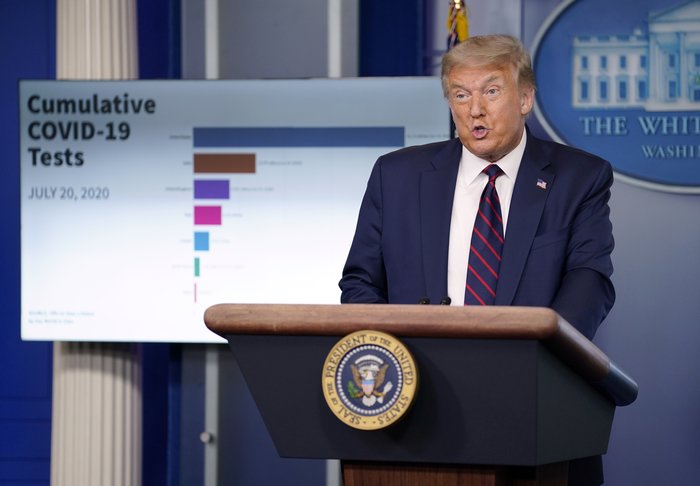 At the same time, the president reiterated his belief that America has performed well in key aspects of its COVID-19 response. And he waded into the pedophilia case involving Epstein and Maxwell, a move that recalled some of the president's strange and unscripted remarks during briefings earlier this year that likely contributed to the sessions being discontinued.

Here are three takeaways to know.

'Worse Before It Gets Better'

Trump opened the nearly half-hour news conference Tuesday afternoon with prepared remarks that were uncharacteristically downbeat about COVID-19, which has been tearing across the Sun Belt in recent weeks and infecting Americans in record numbers.

"It will probably, unfortunately, get worse before it gets better, something I don't like saying about things," Trump told reporters and a national television audience. "But that's the way it is."

While major outbreaks seem to be largely confined to states across the southern U.S., the novel coronavirus "could be spreading" elsewhere, the president said.

The comments were striking because Trump has consistently downplayed the pandemic since it started, saying in late February that the number of cases "within a couple of days is going to be down to close to zero." The president has seen his poll numbers dip as the crisis drags on.

Confirmed cases have grown to almost 4 million from almost 1 million since the last White House briefing on COVID-19 in late April. Deaths have climbed above 140,000 from roughly 50,000 since then, according to the COVID Tracking Project.

The president also made his clearest statement so far urging Americans to wear masks when social distancing isn't feasible, something the Centers for Disease Control and Prevention has recommended since early April.

"We're asking everybody, that when you are not able to socially distance, wear a mask," the president said. "Whether you like the mask or not, they have an impact, they'll have an effect. And we need everything we can get."

Joe Biden, the presumptive Democratic challenger to Trump, first publicly wore a mask during a Memorial Day event that he attended after an extended quarantine. The issue has become politicized, and social media has been awash in videos of "anti-maskers" complaining about being required to wear masks inside retail stores.

Trump first publicly wore a mask during a visit earlier this month at the Walter Reed National Military Medical Center. He tweeted on Monday that mask-wearing is "patriotic," and at one point Tuesday pulled out a mask he had in a pocket.

A Gallup poll this month found that 72% of Americans reported always or very often wearing masks outside the home; the figure broke down to 94% of Democrats, 68% of independents and 46% of Republicans. Numbers were higher across the board after counting people who sometimes wore masks.

After the U.S., the countries with the next-most infections are Brazil with 2.1 million, India with 1.2 million, Russia with almost 800,000 and South Africa with almost 400,000, according to Johns Hopkins University.

The dramatic disparity has led the White House to emphasize correctly that deaths in the U.S. have not rebounded to higher levels, even though infections are at record heights.

The lower death rate has been attributed to better treatment and the fact that newer cases have more frequently affected younger Americans who typically don't succumb to COVID-19. But deaths lag infections, and it remains to be seen whether the improved mortality rate will hold.

Current COVID-19 hospitalizations on Tuesday topped 59,000, just shy of the all-time high, and daily deaths exceeded 1,000 for the first time since late May, the COVID Tracking Project said.

The U.S. is the world's third-most populous country and leads the world in tests performed, but those are likely partial explanations for its sky-high infection numbers. For example, the U.S. on Tuesday reported 63,000 new cases, about one-quarter the entire number of cases that Italy — one of the hardest-hit European countries — has recorded during the entire pandemic.

And while the U.S. has greatly expanded testing, patients are increasingly waiting a week or more for results. While wider testing still identifies hot spots, the delays diminish the usefulness of testing for treatment and contact tracing.

"We've done more testing, by far, than anybody," Trump said Tuesday. "Some of the tests — because it is massive volume — it takes longer."

Trump has repeatedly suggested that if the U.S. didn't test anyone, it would have few infections, as if a disease only exists when it is diagnosed. And reports in recent days have said the Trump administration is trying to block new funding for tests from the next coronavirus relief bill that Congress is cobbling together.

But the president on Tuesday said that "if the doctors and the professionals … would like to do more, I'm OK with it."

Trump was the only speaker at Tuesday's briefing, and he was asked why certain medical experts — including Dr. Deborah Birx, the coordinator of the White House coronavirus task force, and Dr. Anthony Fauci, the nation's top infectious diseases expert — were not present, unlike many briefings earlier in the year.

'I Wish Her Well," Trump Says of Maxwell

Trump occasionally made headlines at earlier briefings with off-the-cuff remarks, and advisers reportedly warned him that offbeat comments were damaging him politically, even if television ratings were high.

The string of eyebrow-raising statements culminated on April 23, when Trump mused at a briefing about bleaching the lungs of COVID-19 patients.

"I see the disinfectant, where it knocks it out in a minute. ... And is there a way we can do something like that, by injection inside or almost a cleaning," Trump said at the time. "Because you see it gets in the lungs and it does a tremendous number on the lungs."

On Tuesday, Trump again courted controversy when a reporter asked about the case of Maxwell, who once dated Epstein and is facing charges of luring minors for sex with the deceased financier. Trump, who was photographed over the years with both Maxwell and Epstein, was specifically asked Tuesday whether Maxwell might implicate "powerful men" in wrongdoing.

"I don't know. I haven't really been following it too much. I just wish her well, frankly," Trump responded. "I've met her numerous times over the years. .... I wish her well."

According to published reports, the president has used a similar line previously when asked about other individuals accused of serious wrongdoing.

And earlier this year, when asked about rumors of poor health surrounding North Korean dictator Kim Jong Un, the president said, "I wish him well."

The next coronavirus briefing hasn't been scheduled, but Trump promised more to come.

"We'll be doing these quite often," the president said.