Law360 (July 24, 2020, 5:25 PM EDT) -- As the new school year approaches and some officials demand a return to in-person learning, teachers unions say they're prepared to do whatever it takes to stall physical reopenings until it's safe to resume classes.

Florida's largest teachers union sued Gov. Ron DeSantis on Monday to stop what they called a "reckless and unsafe" plan to reopen schools next month amid one of the country's worst COVID-19 outbreaks. And if other state and local leaders push to reopen schools before it's safe, strikes and lawsuits are on the table, American Federation of Teachers President Randi Weingarten told Law360. 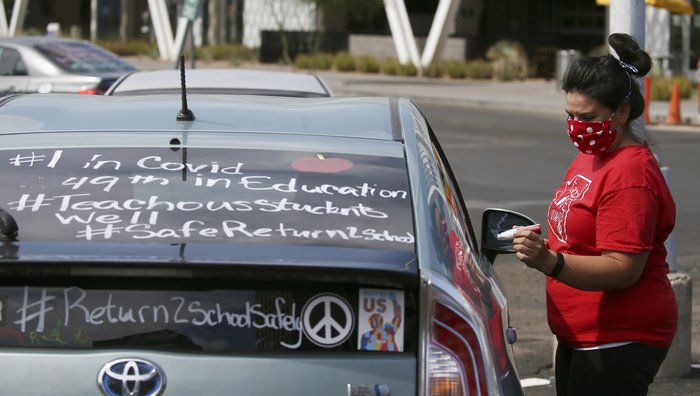 Teachers unions in parts of the country are digging in for a fight as officials look to reopen schools during the resurgent pandemic. (AP Photo/Ross D. Franklin)

"We're not ruling anything out right now," said Weingarten, whose 1.7 million-member union backs the suit.

Schools across the country abruptly shuttered as the pandemic exploded in the spring, finishing out the school year online. With the new year looming, school and government officials are mulling whether and how to return millions of kids to the classroom during a pandemic that makes gathering unsafe.

Teachers unions have urged caution, saying schools should not resume in-person instruction until they've implemented certain safety guardrails and their areas have suppressed the virus. Meanwhile, President Donald Trump and Secretary of Education Betsy DeVos have pushed for reopenings, and some officials are heeding their calls.

This conflict has come to a head in Florida, where "a perfect storm" of risks led the Florida Education Association to file suit this week, Vice President Andrew Spar told Law360.

The Sunshine State typically returns kids to school in mid-August, which is one of the earliest start dates in the country. Florida Commissioner of Education Richard Corcoran has ordered schools to adhere to this target or possibly lose funding, even as the Sunshine State paces the nation in new coronavirus cases per capita.

"Most of our local unions were working with districts on reopening, and there were plans coming into place: What are conditions for reopening? How are we going to reopen?" Spar said. "When the governor and the commissioner issued this emergency order, it threw all of that into chaos."

The suit alleges the order violates the Florida Constitution's requirement that the state provide "safe, secure" public education. The union is seeking an order blocking officials from forcing students back into the classroom, making the state ease online instruction by ensuring all students have computers and internet access, and requiring schools to implement certain safeguards before in-person class resumes.

Florida has emerged as the first major battleground because of its early opening date and the scale of its outbreak, but teachers unions in other parts of the country have clashed with officials over how to hold classes this fall.

The Texas Education Agency recently relaxed plans for a quick return to normal following pushback from the Texas American Federation of Teachers, parents and other stakeholders. In early July, the agency gave parents the option of in-person or distance learning when school resumes in September, while giving school districts discretion to push back in-person classes by up to three weeks.

TEA extended this phase-in on July 17, letting districts push back openings by four weeks and seek waivers allowing for another four-week delay in hard-hit areas.

This reprieve has given Texas AFT locals more time to hash out reopening plans with their districts, communications director Rob D'Amico told Law360. The Houston union wants the district to adhere to a comprehensive AFT framework that calls for reopening with a bevy of precautions only after virus transmission slows to a crawl, and the San Antonio union was part of a coalition that issued a reopening "blueprint," for example.

"We're just hoping things will turn around and maybe we can craft some kind of ideal plan for students that really need to be here to get here, but now is not the time," he said. Until that time comes, he said, members have drawn a clear line: no in-person instruction.

In Illinois, a caravan of Chicago Teachers Union members drove to Chicago Public Schools headquarters Wednesday to protest the district's recent proposal for a hybrid learning model when classes resume in September. The proposal calls for assigning students to 15-member "pods" that will learn on opposing schedules, attending live classes a few days a week and learning from home on others.

But this arrangement puts teachers and students at unacceptable risk in a city that limits fitness classes and indoor dining to groups smaller than the pods and still has not allowed bars to provide indoor service, CTU Vice President Stacy Davis Gates said.

"We would like consideration for our mortality and morbidity in the same way that consideration is being made for bar patrons, for restaurant goers and for fitness enthusiasts," Gates said.

The union has issued a detailed reopening plan that calls for implementing a hybrid model only after the region hits key transmission and tracking benchmarks and after schools implement a number of hygiene and safety protocols. If the district moves forward with its plans, the union will escalate its opposition.

As state affiliates square off with officials and school districts, AFT National is lobbying Congress to shore up ailing school budgets with hundreds of billions of dollars in federal funds.

And as lawmakers debate a new stimulus package, the organization is calling on the feds to free up nearly $140 billion to close funding gaps stemming from the pandemic — plus another $116 billion so schools can buy Plexiglas barriers, retrofit ventilation systems and make other safety improvements. AFT also wants $45 billion to fund grants for child care providers.

The union has spent millions of dollars on TV ads and deployed members to urge their representatives to fund schools. That Senate Majority Leader Mitch McConnell, R-Ky., recently said the bill will place a "heavy emphasis" on education funding shows the message is getting through, Weingarten said. But securing the money needed to safely reopen schools is just one piece of the puzzle.