Law360 (July 30, 2020, 11:34 PM EDT) -- Trump administration officials on Thursday sought to lift the nation's spirits with glimmers of good news about COVID-19 vaccine development and distribution as daily infection counts remained near record highs and new deaths again rose to the highest level since May.

States on Thursday reported nearly 70,000 new cases of the novel coronavirus, the fifth-highest tally ever, according to the COVID Tracking Project. Total confirmed cases in the U.S. stand at roughly 4.5 million.

There were also more than 1,500 new deaths, the highest fatality figure since mid-May. After going nearly two months without a daily death toll that exceeded 1,000, the U.S. since July 21 has recorded eight days with quadruple-digit fatalities. Total deaths in the U.S. have topped 152,000.

Here are three developments to know.

One of the officials ticked off the latest news from the campaign's main vaccine developers, including an announcement Thursday from Johnson & Johnson that its lead vaccine candidate produced "a robust immune response" in primates.

The official also told reporters that things are "going extremely well" with vaccine development at Novavax Inc., that advanced clinical trials by Moderna Inc. and Pfizer Inc. got "off to a great start" this week, and that AstraZeneca PLC and the University of Oxford are likely to start a phase III vaccine trial in the next couple weeks.

It's been "an exciting week for Operation Warp Speed," the official said.

The same official also provided new details about the daunting challenge of distributing hundreds of millions of vaccine doses and related supplies, such as needles and vials, saying that the U.S. Department of Defense and the Centers for Disease Control and Prevention are teaming up on "a joint venture."

According to the official, the DOD will be "handling all the logistics of getting the vaccines to the right place at the right time in the right condition," while the CDC will be in charge of communicating with state officials and tracking vaccinated patients to see how they're doing.

Tom Frieden, a former CDC director, questioned the arrangement early Friday, writing on Twitter that "DOD has zero experience sending vaccines to doctors in the US." 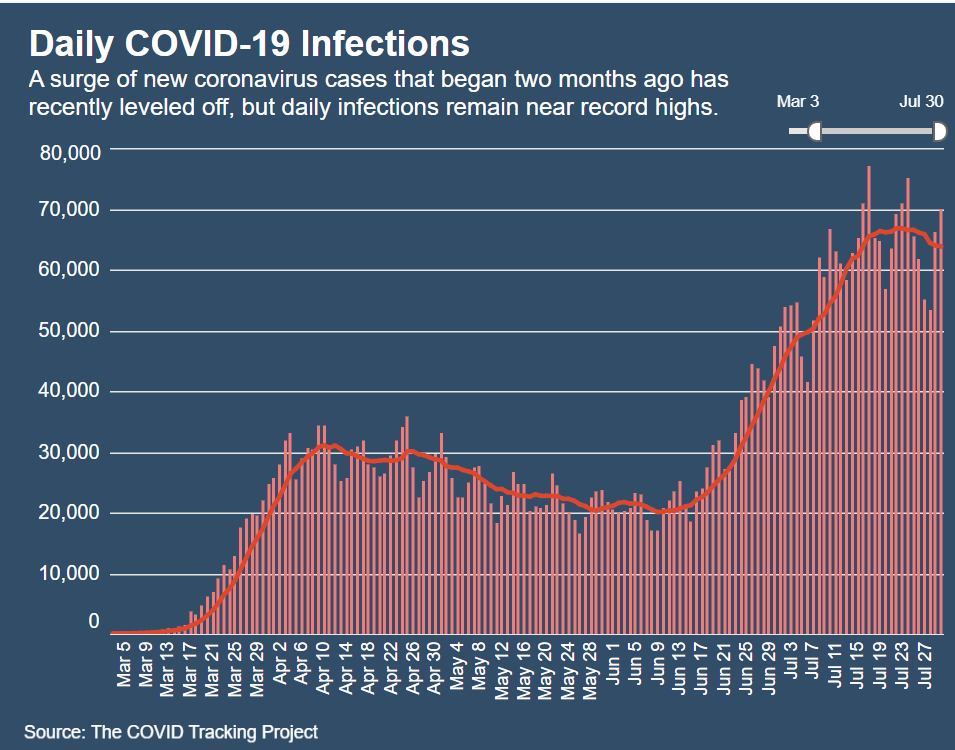 
There are also promising signs involving therapeutics for infected patients, the official said, singling out upcoming trials by Eli Lilly & Co., AstraZeneca and others to see if biologics known as monoclonal antibodies can effectively treat COVID-19.

"If those are successful, we can anticipate significant volumes of therapeutics hitting the market this fall," the official said.

A second official, asked about political pressure on the U.S. Food and Drug Administration to quickly authorize a vaccine, insisted that regulators won't be cowed into clearing a dicey product.

"We're not going to cut any corners," the official said.

But the official declined to commit on seeking input from an independent FDA advisory committee before the agency grants a so-called Emergency Use Authorization or an actual approval license for a vaccine, saying the need for such input will depend on the results of upcoming trials.

"We're going to have to make those decisions once we have more information," the official said.

Brett Giroir, the administration's COVID-19 testing czar, at a separate briefing on Thursday cited "signs of progress across the Sun Belt," where most states have been hammered with skyrocketing infections since June.

The testing czar also pushed back against widespread news reports of patients waiting up to two weeks for test results. Major commercial labs during the past week have processed 56% of tests within three days, up from to 45% during the past month, Giroir said.

Reports that waits of 10 to 14 days have become routine are "just not true," Giroir said, suggesting that abundant anecdotes about such waits aren't representative of the roughly 800,000 tests being performed daily.

The assistant secretary added a noteworthy caveat about testing, saying that it's nowhere near a panacea, given the pandemic's severity in the U.S..

"Testing is important, but testing will not control an outbreak when you have 70,000 new infections documented a day," Giroir said. 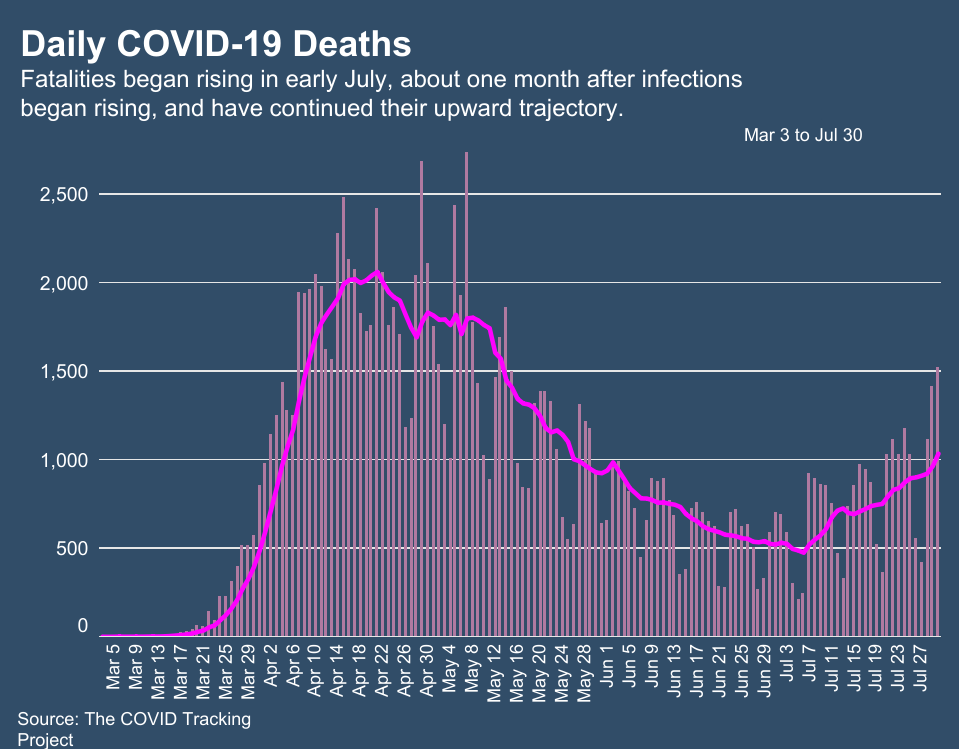 
Giroir also observed that nationwide data in recent days have shown a decline in hospitalizations. But the COVID Tracking Project has questioned that data, noting that HHS recently told hospitals to start sending admission figures directly to HHS, not the CDC, which the Trump administration has repeatedly criticized as overcautious, drawing charges of political interference.

"The hospitalization data we rely on has degraded significantly in quality since the new reporting directive went into effect," COVID Tracking Project researchers wrote in a Thursday blog post.

During the briefing, Giroir acknowledged that deaths — which usually don't happen or get reported until several weeks after infections — are on the upswing, saying that "we are still seeing the mortality this week from hospitalizations a few weeks prior."

Trump Declares 'Resurgence' Outside US

President Donald Trump held a half-hour coronavirus briefing Thursday afternoon at the White House and spent much of the time trying to change the unflattering narrative about his handling of the pandemic.

The U.S. has less than 5% of the world's population but more than 25% of coronavirus cases and almost 23% of coronavirus deaths. But Trump on Thursday tried to shift attention to overseas nations with rising numbers, singling out Australia, Israel and Japan.

"A resurgence has taken place in many countries that people thought were doing well," the president said.

Trump also once again suggested that America's circumstances look bad because of its unparalleled testing volume.

That contention isn't totally without merit, especially when comparing the U.S. to developing countries where tests aren't widely available. But it doesn't explain the massive disparities between the U.S. and other industrialized nations, such as the U.K. and Italy, that conduct substantial testing but have recorded fewer cases during the entire pandemic than America has in the past week.

Update: This story has been updated with a comment from Tom Frieden.