Law360 (October 1, 2020, 9:44 PM EDT) -- U.S. Circuit Judge Amy Coney Barrett has described herself as a staunch textualist and originalist, but neither of those labels make it clear where she'll fall on intellectual property issues if she ends up on the U.S. Supreme Court. 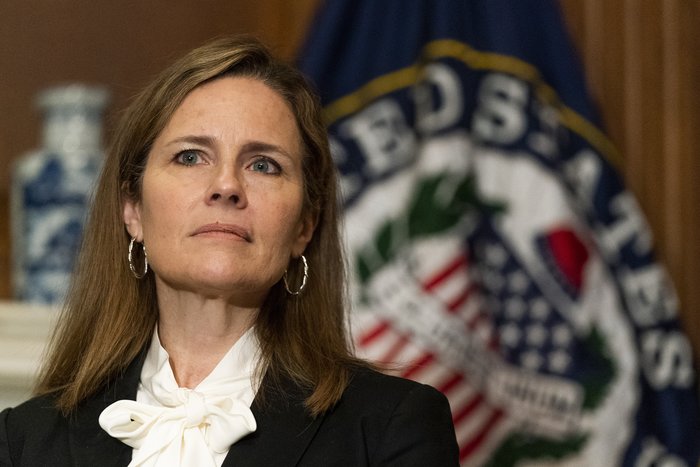 Judge Barrett — President Donald Trump's fast-tracked nominee to replace Justice Ruth Bader Ginsburg — has a very small record on IP, and none on patents, making it difficult to predict how she'll approach cases. To further complicate things, justices with similar political and judicial leanings keep ending up on opposite sides of IP debates, despite being in an area of law that has often drawn unanimous opinions from the high court.

"The ideological lines don't mean that much when it comes to patent law at the Supreme Court, but ... you wonder, will she be another person dissenting in those types of cases?" said Paul Hastings LLP partner Elizabeth L. Brann.

During her brief Seventh Circuit tenure, Judge Barrett has sat on panels for a handful of IP cases. In July, she wrote the opinion in J.S.T. Corp. v. Foxconn Interconnect Technology

, a trade secrets dispute that rested on questions of jurisdiction.

Michael Best & Friedrich LLP partner Arthur Gollwitzer III argued a trademark case before her in 2018 and remembered that she'd done her research and was attentive. He noted that while a fellow panelist dug into comparing two Supreme Court cases on the topic, Judge Barrett wanted to know more about how a recent Seventh Circuit ruling played into the Supreme Court precedent.

"[On my panel], you had a judge who was very quiet, a judge who seemed to have made up his mind, and you had Judge Barrett, who seemed to want to dig into it a little bit, with an open mind," Gollwitzer said. "Maybe she had already decided, but she was very prepared."

Based on non-IP opinions Judge Barrett has written, Dan Harkins, a member at Dykema Gossett PLLC, said she's likely to be strict if she ever has to handle issues of claim construction in patent cases, in the same way she'd strictly analyze the language of the Copyright Act or Lanham Act.

But Judge Barrett hasn't had the chance to make her broader thoughts about approaching IP known, as patent cases are centralized at the Federal Circuit. In addition, she hasn't been on the Seventh Circuit long and her academic work hasn't focused on IP.

In 1998, Judge Barrett clerked for Justice Antonin Scalia, a justice known for disliking IP cases. Before joining the Seventh Circuit in 2017, her career was largely in academia. She's been a professor at the University of Notre Dame, the Law School, since 2002, teaching classes on constitutional law, civil procedure, evidence, federal courts and statutory interpretation.

So far, this term's docket features the high-profile copyright fight between Google LLC and Oracle Corp. and the fate of the Biologics Price Competition and Innovation Act, which is folded into the Affordable Care Act. There are more than 40 IP petitions sitting before the court.

The lack of IP experience isn't uncommon for Supreme Court nominees, experts said, but it leaves attorneys to rely on her method of statutory interpretation to speculate where she'll fall on these cases and the ones to follow. That's not an easy task.

Three recent 7-2 patent decisions show how an originalist or textualist philosophy often doesn't indicate how justices rule on IP cases, even if it's the best hint we have, attorneys said. Originalism looks at how the authors of the Constitution would have understood it, and textualism interprets laws based solely on the meaning of the text itself.

"You have two individuals who consider themselves very extreme originalists — Thomas and Gorsuch — disagreeing about what the original understanding would have been," Duke University School of Law professor Arti Rai said. "Originalism ends up being relatively indeterminate."

"There really is no clean way to separate it along the typical ideology on the Supreme Court," Paul Hastings' Brann said of WesternGeco. "It's really a big question mark."

Then this year, Justice Thomas was on the majority of the court's ruling in Thryv v. Click-to-Call

Justice Gorsuch took the "strictly textualist approach" in Thryv, whereas the other side had a "policy-based justification" to back agency action, said George Mason University's Antonin Scalia Law School professor Adam Mossoff.

Troutman Pepper partner Maia Harris said she'd expect that Judge Barrett would lean toward limiting agency discretion and authority — namely at the U.S. Patent and Trademark Office and U.S. International Trade Commission — but the mixed backdrop of these cases makes it hard to tell.

Gwendolyn Tawresey, a Troutman Pepper associate, added that "the interesting pieces of IP law are that they bring in a lot of issues of administrative agency, as well as the personal property rights versus public rights, all of which implicate constitutional questions."

Rai suggested that Judge Barrett may not be as anti-administrative law as Justice Gorsuch, but that she'd likely be "suspicious" of deferring to administrative agencies.

According to Mark McKenna, a colleague of Judge Barrett's at Notre Dame, the extensive details in the Copyright Act make it easiest for textualist arguments. Trademark law is also read largely on text, but he said people tend to forget that it's essentially codified common law, which can lead to some misinterpretations or bad rulings.

Patent law, however, is more complicated, since the statute is less detailed and key fights are based on court-created law. Rai and McKenna both cited the line of Supreme Court cases dealing with patent eligibility under Section 101 of the Patent Act as a complicating matter. For a textualist, it might be a stretch to say the Patent Act doesn't allow patents for abstract ideas or natural phenomena, McKenna said.

"The textualist instincts have seemed to go away [with] patent cases," he said. "[The justices are] definitely using limitations that you can't find in the text of the statute. ... If I had to guess, I would guess that Amy would be more consistently textualist in that respect."

As for originalism, McKenna said it's not clear what that would even look like with patents anymore.

"In IP, we're so far away from the originalists, but I do think it's interesting that none of the judges have shown an interest in trying to figure that out," he said.

Correction: A previous version of this story misspelled Dan Harkins name. The error has been corrected.