Law360, New York (November 13, 2020, 10:41 PM EST) -- Protesters chanted and held signs outside Jones Day in Manhattan and King & Spalding in Washington, D.C., on Friday as they blasted the law firms' involvement in "frivolous" election lawsuits on behalf of Republicans, including some designed to benefit President Donald Trump. 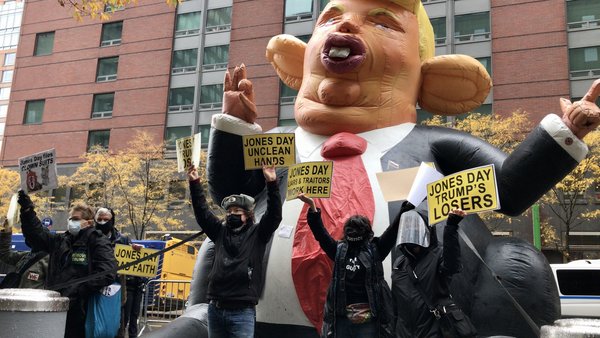 While Jones Day has said the firm is not representing President Donald Trump's campaign in any legal actions, it is representing the Pennsylvania Republican Party in its lawsuit over the state's extended mail-in ballot deadline, and it has been a go-to firm for Trump and his allies. King & Spalding LLP is representing the Trump campaign in a federal lawsuit in North Carolina regarding multiday extensions for receiving mail-in ballots. Neither lawsuit has the prospect of overturning Democrat Joe Biden's projected victory in the presidential election.

Still, the firms have been swept up in a nationwide public backlash against law firms seen as allied with the president as he advances unfounded claims of election fraud.

Around noon on Friday, a group of 40 demonstrators inflated a 16-foot-tall "Trump Rat" in the mid-November rain in New York City as they decried "frivolous lawsuits" filed by Jones Day, Porter Wright Morris & Arthur LLP and other firms, while two dozen protesters in D.C. marched from the White House to King & Spalding's doorstep. Groups in both cities lambasted any attorney profiting off the effort to call the election results into question.

"We are taking a stand here to make clear to Porter Wright, Jones Day and other law firms that we will no longer tolerate this immoral and unethical behavior and that their efforts to assist the Republican Party and Donald Trump in overturning this election will be resisted at every step of the way," said Andy Ratto, an organizer with the New York anti-Trump group Rise and Resist.

"We know there is no widespread voter fraud. We know these are baseless allegations, and Trump's claims have been refuted as soon as they have been brought," said Eliza Orlins, a public defender and candidate for Manhattan district attorney. "These law firms will go down in history as bringing about the downfall of American democracy if they succeed. We must all use our voices to call them out."

The New York contingent was outnumbered in size by New York Police Department officers and building security personnel standing outside the Jones Day offices at 250 Vesey St. downtown. Nine patrol vehicles idled nearby. The group dispersed about 45 minutes after it gathered. 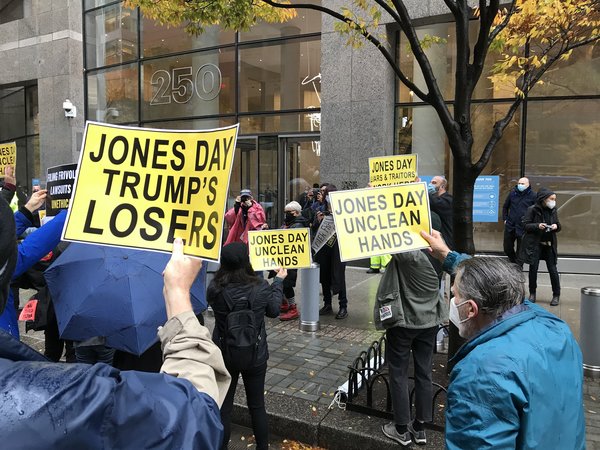 Controversy was also present inside the law firm on Friday, with legal news outlet Above The Law reporting that a Jones Day associate sent a reply-all email that opposed lending the firm's "prestige and credibility to the project of an administration bent on undermining our democracy and our rule of law."

"As an American, I am today deeply disappointed in this firm. I do not accept as simply unpopular what is profoundly undemocratic. We are better than this," Parker Rider-Longmaid said in the email, according to Above The Law. The email also follows pledges by law students to boycott four law firms representing the Trump campaign.

Representatives for Jones Day did not immediately respond to a request for comment about the protests or the email on Friday. Rider-Longmaid also did not respond to a comment request.

The protests against the law firms follow an online campaign by Republican anti-Trump group The Lincoln Project on Tuesday that accused Jones Day and Porter Wright of "architecting" Trump's "unwarranted and dangerous attacks" that threaten American democracy and encouraged attorneys to "resign in protest."

On Thursday, Porter Wright withdrew as counsel from a lawsuit claiming that Pennsylvania conducted an unconstitutional "two-track" election that favored Democrats. The Trump campaign branded the move a victory for "cancel culture" and vowed to press on. 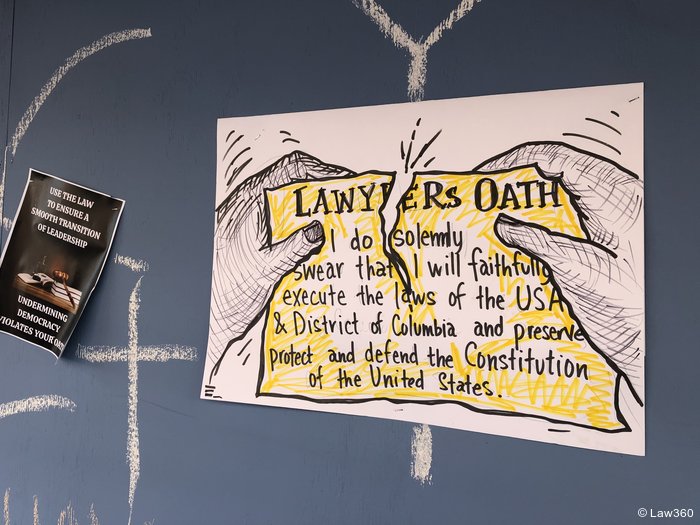 Protesters stapled signs and flyers to the construction fence in front of King & Spalding's D.C. office, located a couple blocks away from the White House. (Julia Arciga | Law360)

At noon on Friday in Washington, a group of nearly 30 met up at the newly christened "Black Lives Matter Plaza" near the White House and chanted as they made their way to King & Spalding's offices at 1700 Pennsylvania Ave. NW a couple blocks away.

Charkera Ervin, a 34-year-old law student at Howard University School of Law, told Law360 that she thought King & Spalding was making an "embarrassment of themselves and the legal field."

"I recognize they like taking high-profile cases. If they can get well-paid in the process, great. But to be filing suits this paper thin, this frivolous, against the American voter, you should have a little more integrity," she said.

As a first-year law student, Ervin said she wasn't going to close any doors right now — but said she would second-guess joining a law firm after graduation that involved itself in such controversial litigation.

"This type of thing is definitely something that would turn someone like me off and say, 'I don't care how many billable hours you got out of this. It's just not worth it,'" she said.

Andrew Sobey of ShutdownDC, the spokesperson for the group that organized the Washington protest, said King & Spalding's involvement in the Trump campaign's election litigation showed that the firm was "not interested in fair legal proceedings."

"They are interested in jamming up the system with nonsense — to delay, to buy time and to confuse people. To allow the outgoing president an opportunity to maybe hold on to power," he said. "We are going today to let everyone know that we see King & Spalding as playing a role in that, and they will be held accountable."

Representatives for King & Spalding did not immediately respond to a request for comment.

The Associated Press called North Carolina for Trump on Friday afternoon. The AP and other media outlets previously declared Biden the winner of the presidential race on Nov. 7 after he was projected to win Pennsylvania.