By Britain Eakin
Law360 is providing free access to its coronavirus coverage to make sure all members of the legal community have accurate information in this time of uncertainty and change. Use the form below to sign up for any of our weekly newsletters. Signing up for any of our section newsletters will opt you in to the weekly Coronavirus briefing.


Law360 (December 10, 2020, 5:49 PM EST) -- A U.S. Food and Drug Administration advisory committee voted Thursday to approve an emergency use authorization request from Pfizer and BioNTech for their COVID-19 vaccine, potentially clearing the way for some groups to start getting vaccinated within days. 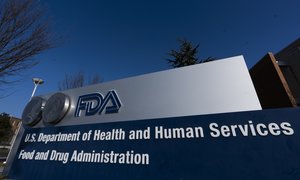 The committee voted 17 to 4 with one abstention, the last step before the FDA decides whether to issue an emergency use authorization, or EUA, which is a quicker process than seeking full FDA approval. While the FDA doesn't have to follow the committee's advice, it often does and is expected to approve the EUA soon.

The vote by the Vaccines and Related Biological Products Advisory Committee came a day after the U.S. recorded more than 3,100 deaths from COVID-19, the highest one-day death toll yet. The vote was cast at the end of a day-long hearing, which had testimony from FDA and CDC officials, and the senior vice president of Pfizer's vaccine clinical research and development division who backed the vaccine's safety and effectiveness.

Following the vote, Marion Gruber of the FDA's Office of Vaccines Research and Review thanked the committee for its input.

"We will take what we've heard today into consideration when deciding on, not only the EUA issuance, but also how to move on the development of and licensure of this product," she said.

The question the committee voted on is whether, based on the available scientific evidence, the benefits of the vaccine outweigh the risks for those who are 16 and older.

Clues that the FDA will likely approve the EUA emerged Tuesday, when FDA scientists endorsed the vaccine in a report, saying there were no safety issues that would bar an EUA and agreeing with Pfizer and BioNTech that the two-dose vaccine is about 95% effective.

The companies' Nov. 20 FDA submission for an EUA included data from a phase 3 clinical study that began in July, in which 43,661 volunteers at 150 clinical trial sites across the U.S., Europe, Latin America and South Africa were given either doses of the vaccine or a placebo, according to the statement.

Out of the pool of participants, 162 who received a placebo developed COVID-19, while only eight participants who were given the vaccine — dubbed BNT162b2 — caught the virus.

The committee, comprised of outside scientific and public health experts, reviewed these findings during Thursday's meeting, asking questions about side effects and plans for continued safety and efficacy monitoring, among other things.

Committee member Paul Offit, a vaccinologist at the Children's Hospital of Philadelphia, pressed for answers about reports concerning two severe allergic reactions that occurred in U.K. participants after the country rolled out Pfizer's vaccine Tuesday. Regulators there have advised those with severe allergies to hold off on getting the vaccine.

With tens of millions of Americans suffering from severe allergies and carrying epinephrine pens with them, Offit suggested this could hamper mass vaccination efforts in the U.S. because that group will fear getting the vaccine. He clarified that he thinks the EUA should be approved, but suggested that Pfizer and BioNTech should do a study specifically involving people with a history of severe allergies.

"This issue is not going to die until we have better data," Offit said.

Gruber said that the vaccine label will contain a warning about the potential for anaphylaxis, but added that it's not yet clear there's a connection between the vaccine and allergic reactions.

Pfizer said it plans to seek full FDA approval in April. Once the FDA grants a biologics license application, it becomes more difficult for other potential vaccines to get emergency use authorization. That's because EUAs are only issued when no viable FDA-approved alternative exists.

But Doran Fink of the FDA's vaccine division said an exception may be granted if, for example, there's a limited supply of the first FDA-approved COVID-19 vaccine, which is likely to be the case.

If the FDA approves the EUA, health care workers would be first in line to get the vaccine. Pfizer reportedly has 6.4 million doses on hand for U.S. distribution, with the U.S. government planning to ship 2.9 million of them out within hours of regulatory approval.

Several countries have already granted emergency approval to Pfizer and BioNTech, with Canada moving Wednesday to greenlight the treatment after the U.K. granted approval last week. Bahrain has also granted approval, according to the companies.

While many questions about the vaccine remain, including whether it will stop the transmission of COVID-19, Pfizer said Thursday that it expects to have data next year on how well the vaccine works to prevent asymptomatic infection.