Law360 (February 10, 2021, 9:10 PM EST) -- Western District of Texas Judge Alan Albright on Wednesday outlined the pandemic safety protocols he has set for an in-person patent jury trial against Intel next week, including mandatory daily COVID-19 testing and a live feed to limit the number of people in the courthouse. 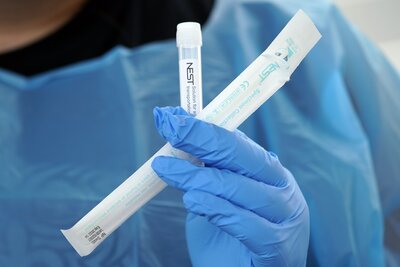 The case, in which VLSI Technology LLC accuses Intel of infringing its computer chip patents, is set to go to trial Tuesday in Waco, Texas, after the Federal Circuit refused to block it from taking place. It will be the first in-person patent jury trial in America since November, after which most courts suspended trials amid virus concerns.

In a 13-page order, Judge Albright said that the parties have agreed to abide by the numerous safety measures the court has put in place "in order to provide a safe environment for all parties and other trial participants," including masks, social distancing and most notably, a requirement that everyone be tested for COVID-19 each day of the trial.

Trial participants, court staff and jurors must have a rapid antigen or PCR COVID-19 test each day and will not be allowed to enter the courthouse unless they test negative, according to the order. The tests will be free to jurors and court staff, with the expenses shared equally by the parties.

The testing will be administered by nurses at a location within walking distance of the courthouse and results will be available in 15 minutes, according to the order. Anyone who tests positive can opt to be re-tested to rule out a false positive.

If anyone tests positive, the nurses will communicate that fact to the parties without identifying the individual, and the court will hold a conference to determine the next steps, the order states.

Judge Albright also put limits on the number of people allowed in the courtroom with the seven jurors, or 20 potential jurors during jury selection. Each side can have a maximum of six trial participants in the room, not including witnesses who are testifying. There will also be an overflow room with a live video feed for a maximum of 30 people.

In addition, the video feed will be available remotely to counsel and witnesses for the parties "in order to minimize the number of party-affiliated individuals that will be in the courthouse," while the public can listen to an audio feed of the trial proceedings over the phone.

All jurors will be provided N95 masks, face shields, gloves and hand sanitizer, and are required to wear the N95 masks at all times except while eating, drinking or deliberating, provided they remain six feet from others, according to the order. The jurors will also be provided lunch so they don't have to leave the courthouse.

The order also states that "all party-affiliated trial participants are encouraged to use an N95 mask" at all times. The exceptions are when attorneys are questioning witnesses or delivering statements, or when witnesses are testifying in the witness box, which will be surrounded by plexiglass. When not wearing masks in those situations, those people are encouraged to wear face shields, the order says.

In addition, the order says there will be temperature checks and a safety questionnaire about COVID-19 symptoms and exposure, enforcement of social distancing rules, and air purifiers and filtration systems in the courthouse.

Counsel for the parties could not immediately be reached for comment about the safety protocols.

VLSI, which is owned by investment funds with assets managed by Fortress Investment Group LLC, filed suit in 2019, and Intel has said in court filings that it is seeking billions of dollars in damages. The case had been proceeding in the Austin division of the Western District of Texas, which is closed for jury trials due to the pandemic. Judge Albright transferred it to the Waco division, which remains open, leading Intel to appeal to the Federal Circuit.

Intel argued, both to Judge Albright and the Federal Circuit, that holding the trial during the pandemic would pose serious health risks, but was unable to persuade either to postpone it.

The appeals court found in December that the judge erred by moving only the trial to Waco, so he then transferred the entire case. Intel appealed again, but the Federal Circuit said last month that it would not "second guess" that decision.

This will be the second patent case to proceed to a jury trial before Judge Albright since he took the bench in 2018 and became the nation's busiest patent judge, with over 800 complaints filed in the Western District of Texas last year. His first trial ended with an October verdict clearing Roku of infringing an MV3 streaming media patent.

One patent jury trial has taken place in the U.S. since November: the Western District of Washington held an entirely remote trial, which ended earlier this month with a verdict that video game company Valve Corp. infringed a game controller patent and owes $4 million in damages.

The case is VLSI Technology LLC v. Intel Corp., case number 6:21-cv-00057, in the U.S. District Court for the Western District of Texas.

Correction: An earlier version of this story incorrectly described the relationship between VLSI and Fortress. The error has been fixed.