Takeaways From A Pandemic Year In NYC Housing Courts

"I remember it being packed and business as usual," Tyrrell told Law360. "The hallways were packed with people, there was no [personal protective equipment] or any way to socially distance."

Less than two weeks later, on March 17, court operations stopped abruptly as the coronavirus pandemic surged across New York City. And while Tyrrell thought he'd be back to court in April, the city's five housing courts remain unrecognizable today, with most appearances conducted by video and evictions effectively halted.

New York City marshals have reported conducting just nine court-mandated evictions since mid-March of last year, clustered in November and December, compared to more than 15,800 the year prior. To take stock of this drastic shift, Law360 spoke with attorneys, advocates and court staff about how the past year has reshaped their work. 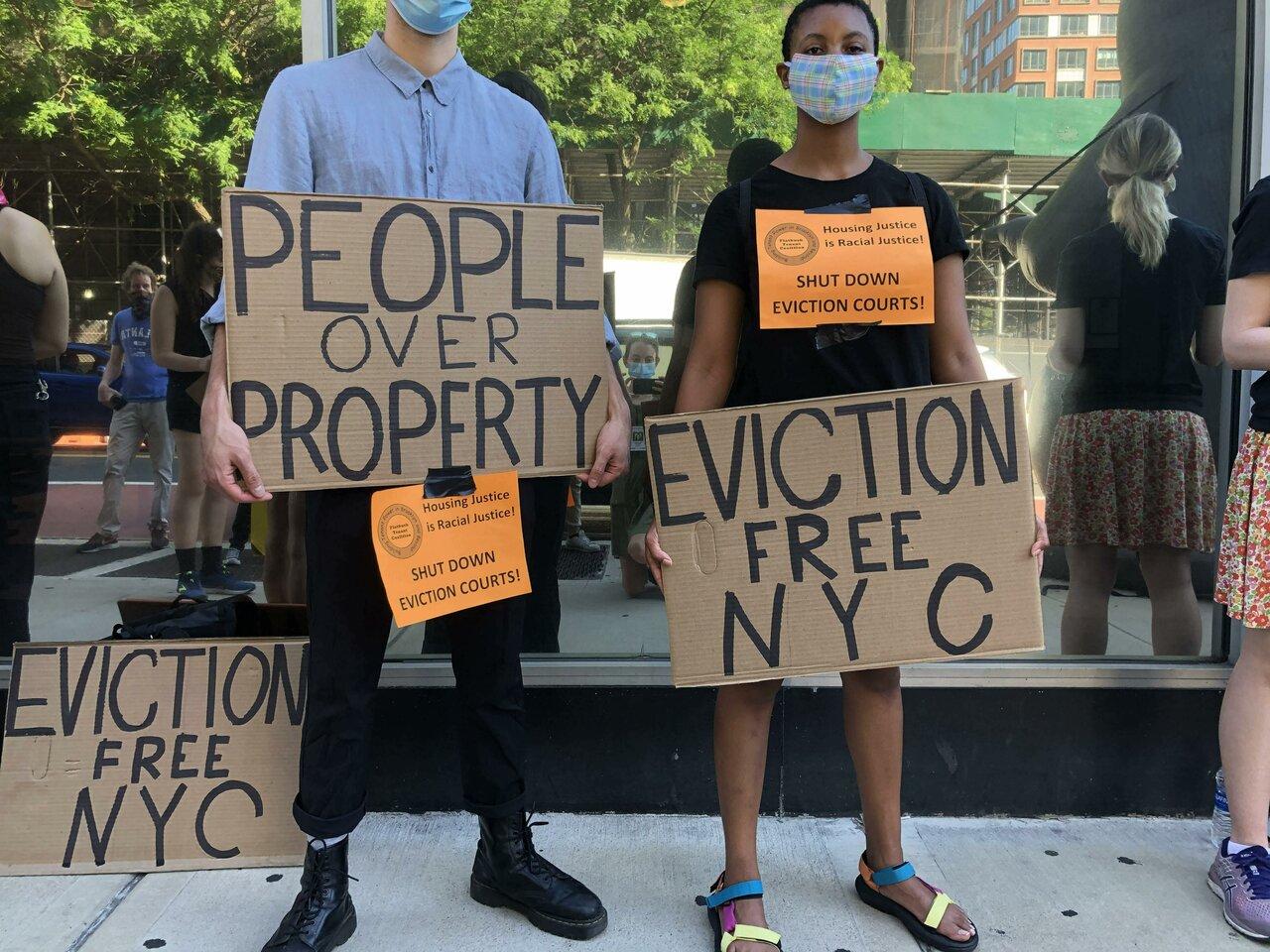 Tenants rallied outside of Brooklyn Housing Court throughout the summer of 2020. (Emma Whitford | Law360)

For many, 2020 was a scramble to adjust to new guidance from the courts, Gov. Andrew Cuomo and the federal government, dictating which types of cases could proceed and when. A patchwork of guidelines changed almost monthly.

Tenant attorneys and advocates said the extremely low number of evictions last year was a victory, but doesn't tell the whole story. More than 40,000 new eviction cases have been filed since June, according to an analysis by the NYU Furman Center, and though most have yet to proceed, months of uncertainty and rallying and lobbying have been stressful.

"It's a great result but it was incredibly hard fought," said Ellen Davidson of the Legal Aid Society. "It wasn't as if in March we got an eviction moratorium for a year that had everyone feeling secure for a year."

Things have been more predictable since December, when the state Legislature passed a bill suspending most eviction proceedings until March, with an option for tenants to extend that protection through the end of April by filling out a form declaring their hardship. Initially slow to roll in, more than 25,000 forms have now flooded the courts.

The stay could last even longer, according to state Sen. Brian Kavanagh, who sponsored the legislation. "Given the rates of vaccination and continued high rates of infection, I think we should be seriously considering an extension," he told Law360 on Wednesday.

Kavanagh also credited the tenant-led movement to cancel rent for "making people aware of the gravity of the situation and the need for aggressive action."

Cea Weaver is an organizer with Housing Justice for All, a statewide coalition that started lobbying for an unqualified eviction moratorium and cancelation of rent debt last March.

Legislators are now considering an alternative proposal to distribute more than $2 billion in federal rent relief to qualifying tenants within certain income brackets, but Weaver said the past year helped bring the dangers of eviction to the forefront. She hopes to parlay this into a renewed statewide campaign to outlaw evictions without good cause.

"There was a societal-wide recognition that housing and health care are really linked to each other," Weaver said. "The same thing goes for evictions: people broadly recognized that evictions are destabilizing."

Some landlord attorneys told Law360 that they felt vilified this year, amid their mounting frustration with the inactivity of the courts. "Landlords continue to be at best ignored, and at worst demonized," said Olga Someras, general counsel for the Rent Stabilization Association, a landlord trade group.

On an operational level, attorneys and court staff agreed that the housing courts in New York City aren't likely to return to the crowding that predated 2020.

"The way housing court was was a little bit of a cattle call and a little bit dehumanizing to people," said Judge Daniele Chinea, president of the Housing Court Judges Association. "Not going back to that would be a benefit."

Office of Court Administration spokesperson Lucian Chalfen agreed, adding that the courts will also maintain special hearings introduced this year to help match unrepresented tenants with lawyers. "There is no question that some of the changes necessitated by the pandemic, such as remote proceedings and expanded right to counsel, will continue and become part of Housing Court's 'new normal,'" he said.

But the current slow pace of cases is not sustainable, said Michael Rosenthal of Hertz Cherson & Rosenthal PC, president of the Kings County Housing Court Bar Association composed of attorneys who represent landlords.

"I like that I don't have to get out of my office chair or get out of my chair at home to handle a case," Rosenthal said. But because cases are backlogged, there's not much he can do for clients whose tenants owe between $10,000 and $40,000. "I still have probably half of my clerical workers and several of my attorneys furloughed or laid off," he said. "Many of us feel this will prompt us in the long run to tighten our belts."

Meanwhile, public defenders say they have been busier than ever, staffing a city-run informational hotline for tenants and representing them in cases alleging landlord harassment in the form of lockouts or utility shutoffs, which have been allowed to proceed all year.

"We've been very, very busy," said Sateesh Nori, attorney in charge of Legal Aid's Queens housing office. "Also, the law has changed so many times, and it's been a full-time job just to keep up with that and also to provide good information to people."

The year has posed new challenges for judges, according to Judge Chinea. "We gear up to do something, we put all of our cases on our calendar, something happens, and we go back and we undo everything we just did," she told Law360. "It's stressful in a Groundhog Day kind of way." Now, she said, the courts are testing a pilot program using assistants, known as court attorneys, to increase the number of cases heard each day.

Chinea added that the amount of debt tenants are accumulating makes the swift distribution of federal rent relief essential, if logistically challenging. "I'm hearing from all of the landlords about how broke they are," she said. Ideally, "tenants will get money quickly, get out of court quickly, landlords will recoup quickly and we can all start moving back toward normalcy."

While judges have adjusted to video conferencing, other court staff have had no choice but to come to court all year — often to assist tenants who can't manage the logistics of remote appearances.

"Especially in housing court, where you have pro se litigants, you have people who don't know how to do remote. They come into the courthouse," said court interpreter David Wayne. "So we wind up interpreting for them in person in front of a screen where the judge and attorneys are."

"We've had a number of people sick in housing court," added Dennis Quirk, president of the New York State Court Officers Association. "We have to be there to open the building up and for security."

There were many tenant-led protests over the past year, particularly outside the front entrance of Brooklyn Housing Court on Livingston Street in Downtown Brooklyn. Esteban Girón, an organizer with the Crown Heights Tenant Union, has been on the bullhorn, unable to pay his own rent while struggling with long-term COVID-19 effects.

"We've proven that we're a powerful force," Girón told Law360. "I don't think you're going to see [us] stop the call for a blanket eviction moratorium any time in the near future. I don't see it happening even as the pandemic wanes."