By Britain Eakin
Law360 is providing free access to its coronavirus coverage to make sure all members of the legal community have accurate information in this time of uncertainty and change. Use the form below to sign up for any of our weekly newsletters. Signing up for any of our section newsletters will opt you in to the weekly Coronavirus briefing.


Law360 (April 23, 2021, 5:16 PM EDT) -- The U.S. Food and Drug Administration said Friday evening that use of the Johnson & Johnson COVID-19 vaccine should resume after "a thorough safety review" was conducted during a 10-day pause to investigate a rare but serious side effect. 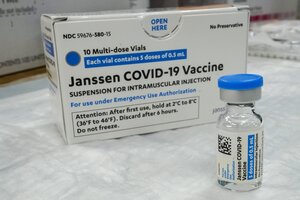 The lift followed a vote by members of the Centers for Disease Control and Prevention's Advisory Committee on Immunization Practices, or ACIP, that determined the benefits of the vaccine outweigh the small risk to mostly women under 50 of developing rare but serious blood clots. The panel recommended restarting the vaccine for adults 18 and older in a 10 to 4 vote, with one abstention.

The FDA, along with the CDC, moved swiftly following the ACIP vote, announcing just a few hours after the emergency meeting wrapped that use of the J&J vaccine should resume. CDC Director Rochelle Walensky said that health and safety led the move to press pause on the J&J vaccine, as well as to lift it.

"Our vaccine safety systems are working. We identified exceptionally rare events — out of millions of doses of the Janssen COVID-19 administered — and we paused to examine them more carefully," Walensky said in a statement. "As we always do, we will continue to watch all signals closely as more Americans are vaccinated."

Johnson & Johnson said during the meeting that it has negotiated a warning label about the blood clots with the FDA, and revealed the text in a slide presentation.

The CDC and FDA recommended on April 13 that the J&J vaccine be paused to further investigate six cases of a type of blood clot called cerebral venous sinus thrombosis. All six cases appeared alongside a condition called thrombocytopenia, or low platelets, which ordinarily help with blood clotting.

The CDC panel said Friday it has since identified 15 total cases out of nearly 8 million doses administered of what it's calling TTS, or thrombosis with thrombocytopenia syndrome. All of the identified cases since the FDA authorized emergency use of the vaccine in February have occurred in women ages 18-64, with all but two of those cases appearing in women under 50.

The biggest concentration of cases, 7, emerged among women ages 30-39. There was also one case of TTS in a man observed during J&J's phase 3 clinical trial.

Of the 15 cases currently under investigation, three of the women have died, seven remain hospitalized — four of them in the intensive care unit — while five are now recovering at home.

The ACIP presented evidence and debated the path forward during Friday's meeting, grappling with how to ensure women under 50 are made aware of the potential risk, but with some panel members expressing uncertainty about how to implement that. Some members wanted to include language stipulating that women in that age group can select another vaccine if they aren't comfortable with the risk, but that suggestion did not make it into the final recommendation.

The question of how to best inform women under 50 that they are at higher risk for the side effect was ever present during the meeting, and some voiced concern that stronger language is needed to ensure that women in that age group are empowered and informed about whether to get the J&J shot. ACIP panel member Beth Bell said while she voted yes, she thinks the recommendation should reflect more nuanced concerns about the risk to women under 50.

"I am concerned that the consumers and women in this age group in particular will not be adequately informed just by the FDA EUA factsheet," Bell said, abbreviating emergency use authorization. "And so we really, depending on the public health agencies and the partner organization, [need] to make sure that people actually are informed and are empowered and that they actually get a balanced perspective."

According to data presented during the meeting, restarting the vaccine without any age restrictions will allow all willing adults who want to be vaccinated to do so 14 days sooner than if use was discontinued.

Among the topics debated Friday was the benefits the J&J vaccine comes with that the other two vaccines currently authorized for emergency use lack. While the Pfizer and Moderna vaccines require two doses weeks apart and freezing storage temperatures, the J&J vaccine is a single dose and can be stored at refrigerator temperatures.

That makes it more accessible to populations that face access barriers, like homeless and homebound populations, and those who live in rural areas or have limited access to health care, according to CDC official Sara Oliver. On the flip side, those populations are also the most at risk of facing barriers to having TTS diagnosed and treated.

Oliver said that resuming the J&J vaccine for all adults 18 and older would result in 26 cases of TTS, but would prevent 1,435 deaths and 2,236 intensive care unit admissions in 9.8 million vaccinations. Meanwhile, resuming the vaccine only for those 50 and older would cause two cases of TTS, while preventing 257 deaths and 779 ICU admissions over 3.6 million inoculations.

The case for resuming the vaccine was murkiest for women ages 18-39, according to Oliver's data. For every million doses administered, the panel estimated that 12 deaths and 127 ICU admissions would be prevented. However, it would cause 13 cases of TTS.

Friday's meeting came nine days after the ACIP elected not to issue a recommendation on the pause, instead deciding it needed more information and agreeing to reconvene to assess the additional data discussed Friday.

Update: This story has been updated with the FDA's decision to lift the pause.