Law360 (May 5, 2021, 4:17 PM EDT) -- The Biden administration announced Wednesday that it supports a temporary waiver on intellectual property protections on COVID-19 vaccines, a significant boost to an effort led by India and South Africa that proponents say is needed to make the vaccines more widely available. 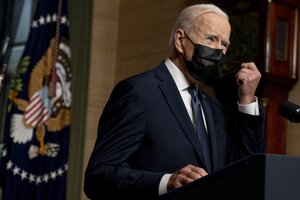 The U.S. had been one of several wealthy countries that opposed the proposal at the World Trade Organization since it was introduced in October. U.S. Trade Representative Katherine Tai announced the Biden administration's new position in a statement.

"This is a global health crisis, and the extraordinary circumstances of the COVID-19 pandemic call for extraordinary measures," she said. "The administration believes strongly in intellectual property protections, but in service of ending this pandemic, supports the waiver of those protections for COVID-19 vaccines."

Tai added that the U.S. will participate in negotiations at the WTO to reach an agreement on the waiver, and cautioned that "those negotiations will take time given the consensus-based nature of the institution and the complexity of the issues involved."

The scope of the potential waiver is subject to further negotiation at the WTO, which requires a consensus among all of its 164 members before a decision can be made. The European Union, the U.K., Japan and other nations have so far opposed the COVID IP waiver, so it may yet face significant obstacles, even with the U.S. on board.

The administration's support for the waiver was immediately lambasted by the pharmaceutical industry, which had strongly opposed the proposal, and was lauded by public interest groups that supported it.

The Pharmaceutical Research and Manufacturers of America, the drug industry's lobbying group, said in a statement that "the Biden administration has taken an unprecedented step that will undermine our global response to the pandemic and compromise safety."

"This decision will sow confusion between public and private partners, further weaken already strained supply chains and foster the proliferation of counterfeit vaccines," PhRMA said. It added that the move is "handing over American innovations to countries looking to undermine our leadership in biomedical discovery" and "does nothing to address the real challenges to getting more shots in arms."

Another major opponent, the U.S. Chamber of Commerce, urged Biden to reverse course and said in a statement that "the administration has gotten this issue wrong; undermining intellectual property rights for complex, hard-to-manufacture vaccines will not accelerate global production, instead it will take us off track in the ongoing and successful efforts to license and scale global production of vaccines," it said.

The group Public Citizen, which endorsed the waiver and held a protest on the National Mall on Wednesday to support it, hailed the announcement as a "game-changer" and urged the administration to push for the "fastest possible agreement" at the WTO.

Lori Wallach, director of Public Citizen's Global Trade Watch, thanked the administration "for prioritizing saving human lives and livelihoods and cutting through Big Pharma's lies and threats to fight for the speediest possible end to the unprecedented threats posed to all Americans and people worldwide by the COVID-19 pandemic."

Doctors Without Borders, another supporter, applauded the "bold decision," but stressed that it believes the waiver should apply not just to vaccines, but "should also cover other medical tools for COVID-19, including treatments for people who fall ill and diagnostics to help curb the spread."

The administration's decision to support the waiver sparked a divided reaction among U.S. lawmakers. House Speaker Nancy Pelosi, D-Calif., called the administration's decision "a welcome and important step in the fight to crush the virus globally," and said the WTO negotiations will focus on "how best to ensure that all countries have access to lifesaving treatments and vaccines during this extraordinary pandemic."

In a joint statement, Sens. Thom Tillis, R-N.C. and Tom Cotton, R-Arkansas, called the decision is "disastrous" and "astonishing" and said it "will do little to end the COVID-19 pandemic and help developing nations, but it will hand over America's medical technology to adversarial states like China and Russia."

Tai's announcement came after the close of the first day of a two-day WTO meeting to discuss the waiver. During the session, India and South Africa said they plan to revise their proposal in an effort to reach consensus, and to have a new draft ready for the next meeting on the issue in June.

WTO Director-General Ngozi Okonjo-Iweala welcomed the news that the proposal will be revised, and said at Wednesday's meeting that the organization needs to act with a sense of urgency because "too many people are dying."

"I am firmly convinced that once we can sit down with an actual text in front of us, we shall find a pragmatic way forward, acceptable to all sides that allow the kinds of answers that our developing country members are looking at with respect to vaccines, whilst at the same time looking at research and innovation and how to protect them," she said. "We just need the will to sit down."

WTO spokesman Keith Rockwell said at a press briefing after the meeting that there are limited details about how the proposal could be revised. He noted that one aspect that members had discussed was providing more specifics about how long the waiver would last, since it is intended to be temporary during the pandemic.

With the news that the proposal is being revised, the meeting was "far more constructive and pragmatic, and less emotive and finger-pointing than it had been in the past," Rockwell said. He noted that Tai was not present at the day's session.

The Biden administration had been the focus of lobbying both for and against the waiver. Groups like Doctors Without Borders, several Democrats in Congress and a host of former world leaders have argued that relaxing intellectual property protections would reduce barriers to vaccine access and allow countries to ramp up vaccinations without worrying about being accused of IP infringement.

The pharmaceutical industry, other business groups and some lawmakers maintained that intellectual property is not a barrier to vaccine access, and logistical challenges and supply shortages were more to blame. Opponents said waiving IP protections would undermine the incentive to develop new treatments in the future and provide valuable U.S. technology to other countries.

Tai said in her statement that the administration's goal is to get as many people vaccinated as possible.

"As our vaccine supply for the American people is secured, the administration will continue to ramp up its efforts – working with the private sector and all possible partners – to expand vaccine manufacturing and distribution," she said. "It will also work to increase the raw materials needed to produce those vaccines."

Update: This story has been updated with additional comments.