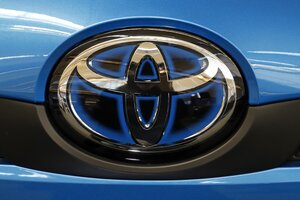 A Thai court said Thursday it was investigating claims that Toyota may have bribed judges in the country, previously reported by Law360. (AP Photo/Gene J. Puskar)

On Wednesday, Law360 reported federal prosecutors had impaneled a grand jury in the Northern District of Texas as part of the U.S. Department of Justice's ongoing FCPA investigation of Toyota's alleged judicial bribery in Thailand. The report included the names of two former presidents of Thailand's Supreme Court who remain sitting senior judges, a former president of the Court of Appeal and three former top attorneys at Toyota Motor Thailand.

The Court of Justice first began investigating the matter when they contacted U.S. officials following Law360's March 29 report of an alleged bribery scheme by Toyota Motor Thailand to overturn a pending $350 million tax judgment, according to a press release translated from Thai. The court will now seek to corroborate the allegations that Supreme Court judges may have been involved in the alleged scheme.

The court said that U.S. officials had not yet responded to its requests for information.

"Since becoming aware of the matter, the Court of Justice has been trying to follow, verify, and gather all related information and facts both in the country and abroad," COJ spokesperson Suriyan Hongvilai said in the statement translated for Law360. "Now that there has been a news report mentioning names and positions of some individuals, the Court of Justice will proceed to verify with the related affiliated agencies."

"Further action would depend on the details of the obtained information," he noted.

In a statement Thursday, Toyota said it "works tirelessly to uphold the highest professional and ethical standards in each country where we operate. We take any allegations of wrongdoing seriously and are committed to ensuring that our business practices comply with all appropriate government regulations."

The DOJ declined to comment and the SEC did not immediately respond to a request for comment.

The court official also noted that the Supreme Court panel has not yet begun deliberations on Toyota's appeal of the tax judgment as the court allowed an extension until July 13 for amendments to the petition. Once the government submits its opposition to the appeal, he noted, the case will be fully submitted to the high court for consideration.

The Court of Justice also added a warning that if it is able to verify any of the alleged wrongdoing, it will "proceed with disciplinary action procedures regardless of whom those involved are or what position they hold."

The court asked the public to await the results of both the U.S. and Thai inquiries before drawing conclusions about the allegations.