Law360 (June 3, 2021, 10:01 PM EDT) -- The federal government's eviction moratorium reached the U.S. Supreme Court on Thursday when a coalition of landlords and Realtors asked the justices to halt the policy during an appeal. 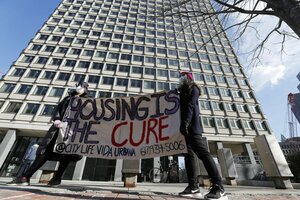 The Supreme Court on Thursday was sent an emergency appeal of the CDC's eviction moratorium, which is set to expire June 30. (AP Photo/Michael Dwyer)

The landlords and Realtors sent an application to Chief Justice John Roberts, who handles emergency appeals from the D.C. Circuit. The submission on the court's "shadow docket" could see relatively quick action regarding the Centers for Disease Control and Prevention's eviction ban, which is set to expire June 30. The appeal is likely to see more briefing before the justices act.

The challengers won at the district court level, where a D.C. federal district judge ruled May 5 that the moratorium exceeded the CDC's authority. The next week, however, U.S. District Judge Dabney L. Friedrich stayed her ruling pending appeal. A D.C. Circuit panel on Wednesday declined the challengers' request to lift that stay, finding the government "has made a strong showing that it is likely to succeed on the merits."

On Thursday, the landlords and Realtors urged the justices to lift the stay and halt the eviction moratorium.

"The stay order cannot stand," they said. "As both the Sixth Circuit and the district court here recognized, Congress never gave the CDC the staggering amount of power it now claims. Nor do this court's precedents permit unlawful agency actions to persist throughout the pendency of an appeal merely because the government has raised serious questions on the merits."

The challengers said that allowing the government an interim win in this case would break with precedent and mean that "the government will almost always be able to get away with unlawful temporary action by obtaining a stay until its overreach expires — in other words, the government always wins, even when it loses."

"The CDC shifted the pandemic's financial burdens from the nation's 30 to 40 million renters to its 10 to 11 million landlords — most of whom, like applicants, are individuals and small businesses — resulting in over $13 billion in unpaid rent per month," they said. "That massive wealth transfer (and accompanying government-sanctioned unlawful occupation of property) will never be fully undone."

The challengers also reiterated their argument that the eviction ban no longer has a public health justification amid improving COVID-19 conditions, pointing to the CDC's updated guidance that vaccinated people can safely forego masks in most situations.

The government fired back last month that the argument was "baseless" because the updated guidance "does not change the basic facts underlying the CDC [eviction ban] order: COVID-19 spreads quickly and easily among unvaccinated individuals, and evictions exacerbate its spread."

The U.S. Department of Justice, which has represented the government agencies, did not immediately respond to a request for comment late Thursday.

The lawyers on the brief for the landlords and Realtors are Jones Day partners Brett A. Shumate, a former clerk to Fifth Circuit Judge Edith H. Jones, and Charlotte H. Taylor, who clerked for jurists including Justice Sonia Sotomayor. Shumate declined to comment beyond the brief.

University of Texas law professor Stephen I. Vladeck on Thursday tweeted that this is the "first major 'shadow docket' case involving the Biden administration." The "shadow docket" refers to the cases that don't go through the Supreme Court's normal process of public arguments and signed merits opinions. They can be anything from a denial of certiorari to an order lifting a lower court injunction.

The eviction moratorium dates to the March 2020 coronavirus relief bill, which included a six-month ban that was succeeded by a CDC order in September. The CDC order was originally slated to expire in December, but Congress granted a temporary extension through the end of January. The agency later moved to extend the eviction moratorium through June 30, but without congressional approval.

Experts have told Law360 that judges' wide-ranging legal interpretations of the constitutional and statutory arguments brought against the ban are leaving state courts with inconsistent guidance on how to handle eviction cases. This has left the moratorium's enforcement up to each individual judge's discretion.

The landlords and Realtors are represented by Brett A. Shumate and Charlotte H. Taylor of Jones Day.

Counsel information for the government was not immediately available.

The underlying case is Alabama Association of Realtors et al. v. U.S. Department of Health and Human Services et al., case number 21-5093, in the U.S. Court of Appeals for the D.C. Circuit.