Across a subset of more than 27,300 eviction cases filed in New York City this year, only about a third of tenants have received legal representation, according to a new analysis seeking to raise the alarm about the city's strained program that provides free lawyers. 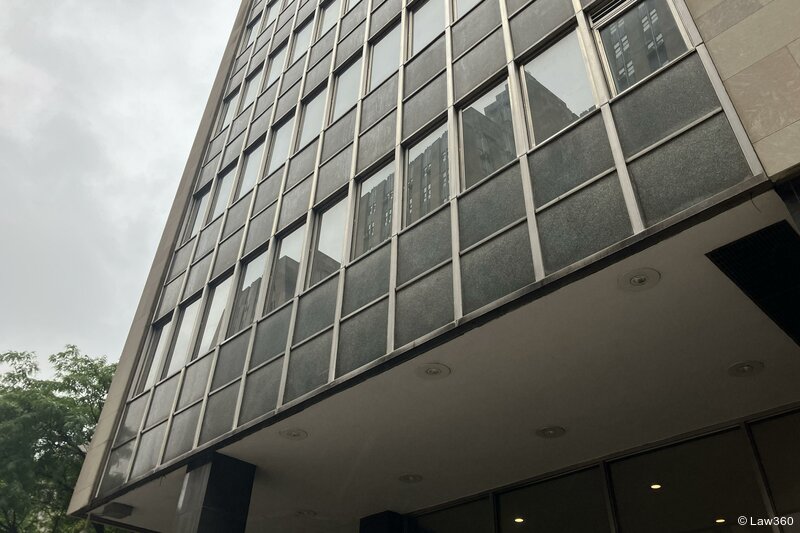 The exterior of 111 Centre Street in Manhattan, which contains the borough's housing court. (Emma Whitford/Law360)

They found that in 17,393 of the 27,383 eviction cases in which a tenant has appeared in court at least once, the tenant was not, or has yet to be, assigned counsel — nearly 64% of the total.

"This is a snapshot in time of the current state of representation of tenants who have had evictions filed against them since Jan. 15," said Lucy Block, a senior research and data associate with ANHD who collaborated on the analysis.

"Even if you go back to cases that were filed as early as March 13, only 34.5% of those tenants had received an attorney as of this month," Block said, adding: "If a case happened six months ago and the person still doesn't have an attorney, that signals a serious problem."

ANHD collaborated with the Housing Data Coalition and Right to Counsel NYC Coalition to develop a data tool to accompany its analysis, launched Thursday. The groups say they will continue to track what they describe as the tenant representation rate across the city's housing courts.

Although the NYC Eviction Crisis Monitor tool aims to shed new light on the challenges tenants are facing in housing court, attorneys and advocates have been describing untenable caseloads for months and demanding a slowdown in case calendaring. Without such a concession, they say, tenants will continue to flounder.

"The 2½ years that I was going to court, thank god I had an attorney," Randy Dillard, a Bronx tenant and member of the Right to Counsel NYC steering committee, told Law360 on Thursday. "My kids are grown now, but they are still affected by what it was like not knowing where we were going to live. That was a nightmare."

A recent analysis by Law360 showed that court-ordered evictions and case filings were still well below pre-pandemic levels as of July, even as they trended up from 2021 lows.

Yet legal service providers say a lawyer shortage, and mounting filings on top of a pandemic backlog, are undermining the city's Right to Counsel law, which expanded citywide last year. The Right to Counsel NYC Coalition is an advocacy group that pushed for the law's passage.

Though the 2017 law directs the city to set up a program to serve eligible renters – those facing eviction who earn 200% of the federal poverty guideline or less – it does not impose obligations on state courts, such as mandatory adjournments until a tenant can retain counsel.

According to a 2021 report by the New York City Human Resources Administration, representation for city tenants facing eviction soared in recent years, from a low of just 1% in 2013 to more than 71% in the fourth quarter of 2021. 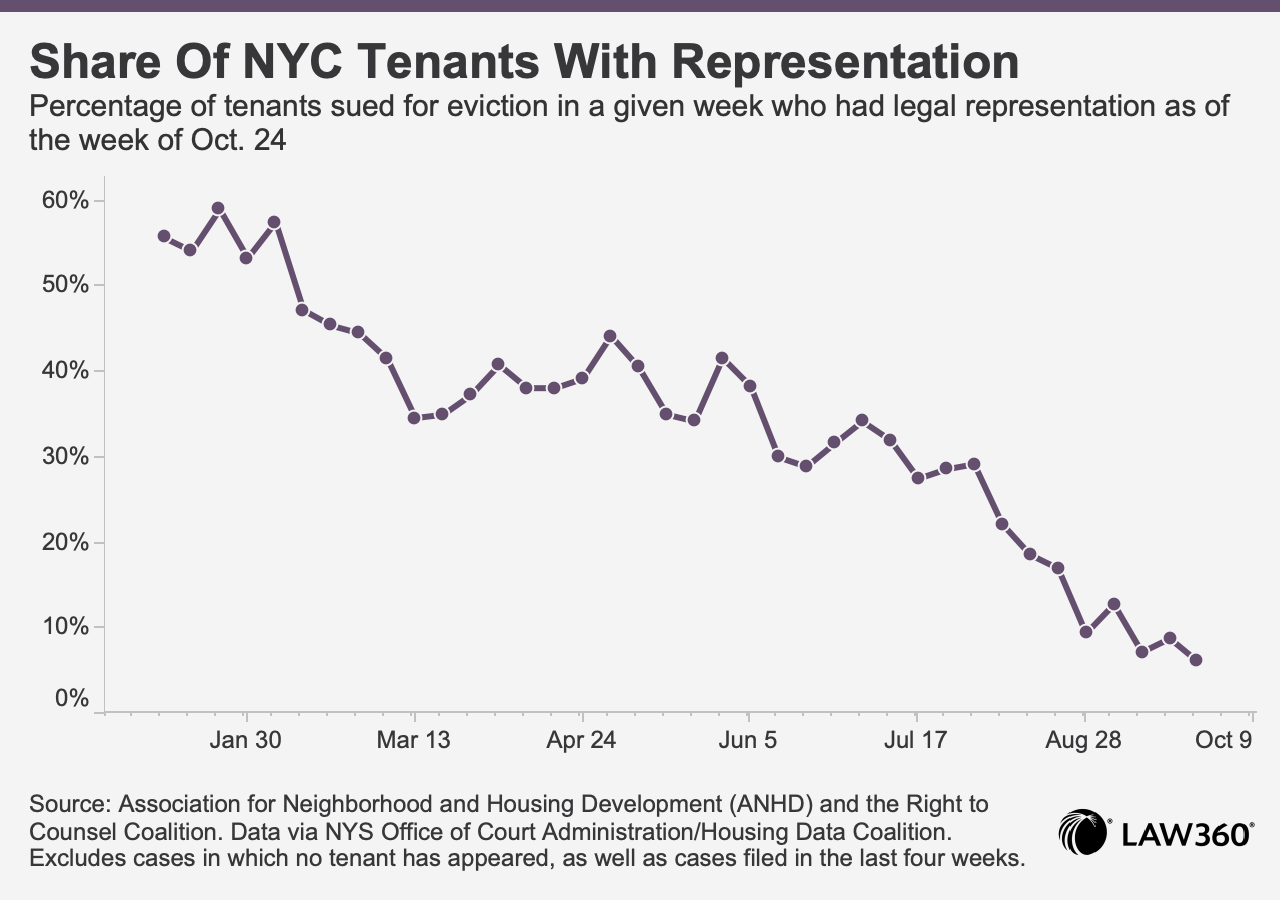 
The shift is not lost on landlord attorneys like Michael C. Rosenthal, founding partner at Hertz Cherson & Rosenthal PC. "The [legal service] providers are saying they don't have enough attorneys to cover the amount of new cases and as such are often just giving advice now and not providing representation," he told Law360 by email Thursday.

Yet landlord counsel argued that cases are already moving slowly. Tenants who apply for emergency pandemic rental assistance see their eviction cases paused while their applications are pending.

"I think that the reason why a lot of tenants don't get lawyers is because if you tell the court you have [emergency rental assistance], their case gets stayed," said Lisa Faham-Selzer of Kucker Marino Winiarsky & Bittens LLP.

It was not immediately clear how many cases filed this year are currently paused due to Emergency Rental Assistance Program applications.

The NYC Eviction Crisis Monitor launched this week excludes cases in which the tenant has yet to appear in court, and analyzes data on a four-week delay to account for possible system lags. The analysis includes both active and resolved cases filed since Jan. 15.

According to Block of ANHD, the tenant representation rate is calculated by adding up all qualifying eviction cases that have had at least one appearance with tenant counsel present at least one week prior to the analysis date, and dividing that figure by the total case pool.

Rates may increase retroactively if attorneys are assigned to a case at a subsequent court date, Block noted – a change that the tool would reflect.

The analysis does not review tenant income to confirm eligibility for free counsel.

Reached for comment Thursday, Office of Court Administration spokesperson Lucian Chalfen said the court is "not in a position to obtain personal information about the income of litigants" in order to determine who might qualify for legal services.

"The Office of Court Administration has had a running dialogue with the legal services providers and the [New York City] Office of Civil Justice to try to work a solution that accommodates the concerns raised," Chalfen added. "In the meantime, individual judges retain the discretion to adjourn cases so that tenants can obtain counsel."

The Office of Civil Justice, which administers the Right to Counsel program, did not immediately reply to a request for comment on Thursday's findings.

Meanwhile, tenant attorneys described how they are attempting to keep up with demand. Marika Dias, director of the Safety Net Project at the Urban Justice Center and a member of the Right to Counsel NYC steering committee, said her team has a tenant waiting list.

"We have a waitlist of people who we have not been able to assign an attorney to yet, and we're trying to do that at the earliest opportunity in their cases, but sometimes that's two or three [court] dates in," Dias told Law360 on Thursday.

Yet still more tenants are slipping through the cracks, she added.

"What I see in the court is just tenants in desperation, and they see me as an attorney and ask, 'Can you help?'" Dias said. "Some people approach me outside the courthouse and show me the list they were told to contact, and they say, 'No one will take my case.'"

Clarification: This story has been updated to clarify the scope of the New York City Right to Counsel law.