By Jon Hill and Philip Rosenstein
Law360 is providing free access to its coronavirus coverage to make sure all members of the legal community have accurate information in this time of uncertainty and change. Use the form below to sign up for any of our weekly newsletters. Signing up for any of our section newsletters will opt you in to the weekly Coronavirus briefing.


Law360 (May 29, 2020, 8:28 PM EDT) -- UPDATED June 16, 2020 | The COVID-19 pandemic has caused widespread economic hardship for businesses of all sizes, with stay-at-home orders just now starting to be lifted after months in effect. Among the bipartisan actions taken by the federal government to support the business community was a concerted effort to provide forgivable loans to small businesses.

Launched at the beginning of April, the Small Business Administration-run Paycheck Protection Program offers low-interest loans of up to $10 million each to cover payroll costs, rent and other overhead expenses for a set number of weeks. Those loans can then be forgiven if businesses hold up their end of the deal by keeping employees on the payroll.

Law360 has compiled data released by the SBA as of June 12 to look under the hood of the program by examining statewide, lender and loan data. These visualizations will be updated as new data becomes available. 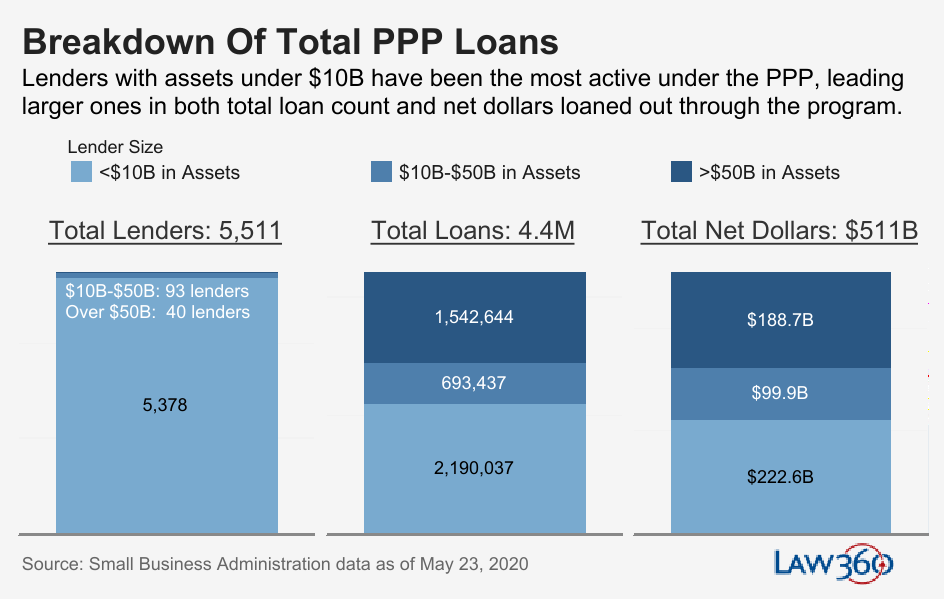 The program was funded with an initial $349 billion and ran out within two weeks, prompting Congress to authorize a second round of $310 billion in lending capacity in late April. That second round remains ongoing. 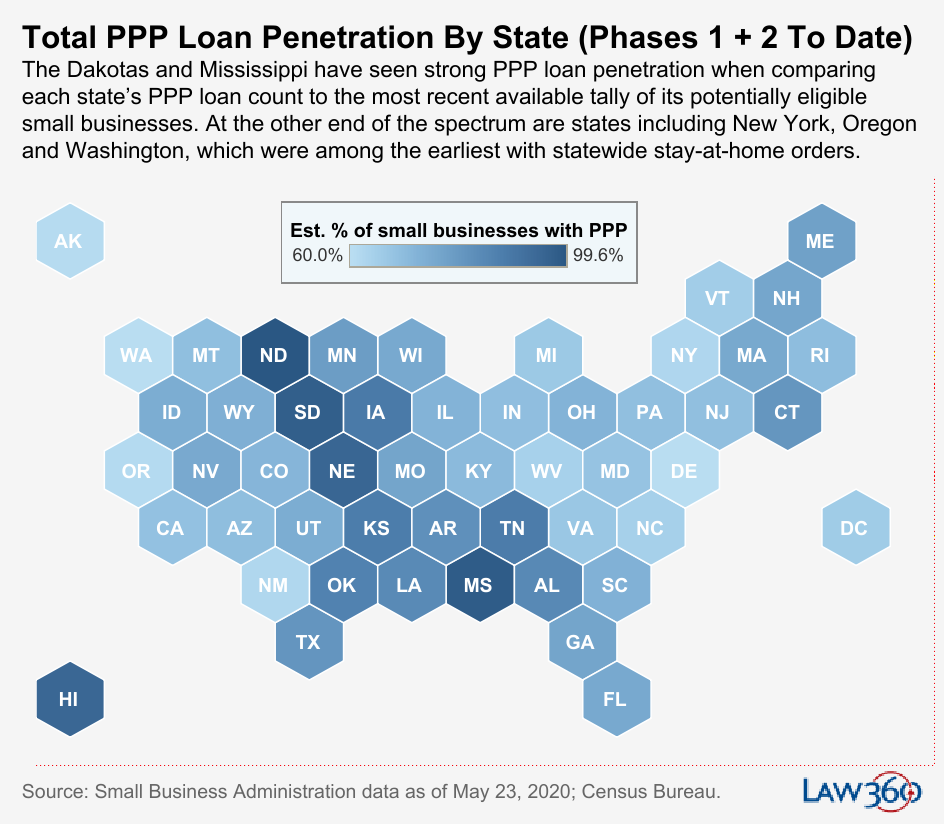 
Data from the first round of PPP lending showed that a number of smaller, rural states received proportionately more loans and money than many larger, more urbanized states, sparking concerns that the program wasn't benefiting everyone equally or adequately reaching areas that took particularly sharp blows from the pandemic.

Federal Reserve Bank of New York researchers found that certain states in the Midwest and Mountain regions, for example, had received more PPP loans on a per-small-business basis than New York, which had a much higher prevalence of coronavirus cases and was among the earliest states to implement a statewide stay-at-home order.

Recent data indicates that larger states have gained some ground on these metrics in the second round of PPP lending. A rough estimate of New York's per-business loan approval rate suggests it has more than tripled, while California's has more than quadrupled. Florida, Illinois and Texas have also shown marked improvement, among others.

But the overall trend of geographic divergence hasn't gone away. To date, the program has made some of its greatest inroads in the Dakotas, which never had statewide stay-at-home orders but still have among the highest per-business loan approval rates in the country. And other states in the Midwest and South continue to lead many of their peers on the coasts, including Washington State and New York, home of the nation's first and worst coronavirus outbreaks, respectively. 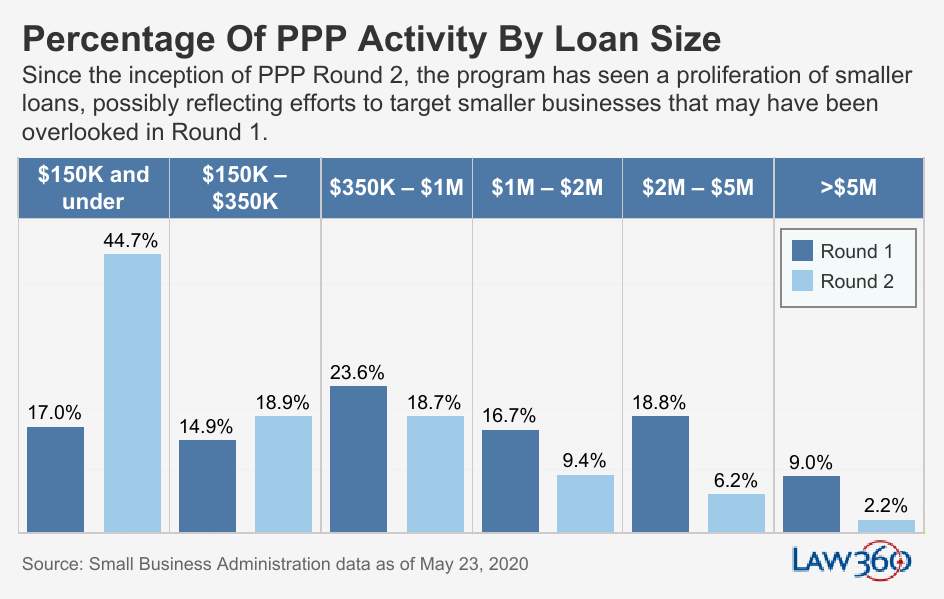 
Reports in April that some national restaurant chains and public companies were able to get approved for PPP loans prompted a backlash, underscoring anxieties that mom-and-pop businesses have had about being edged out by larger, more sophisticated firms in the rush to secure funding from the first-come, first-serve program.

Since then, data released by the SBA shows a shift in the composition of loans made through the program, with smaller loans accounting for a larger share of funding reported approved in the second round compared to the first. Some of the drop-off at the larger end may stem from the SBA's guidance warning bigger companies against getting or keeping PPP money, but there's also been growth at the smaller end. 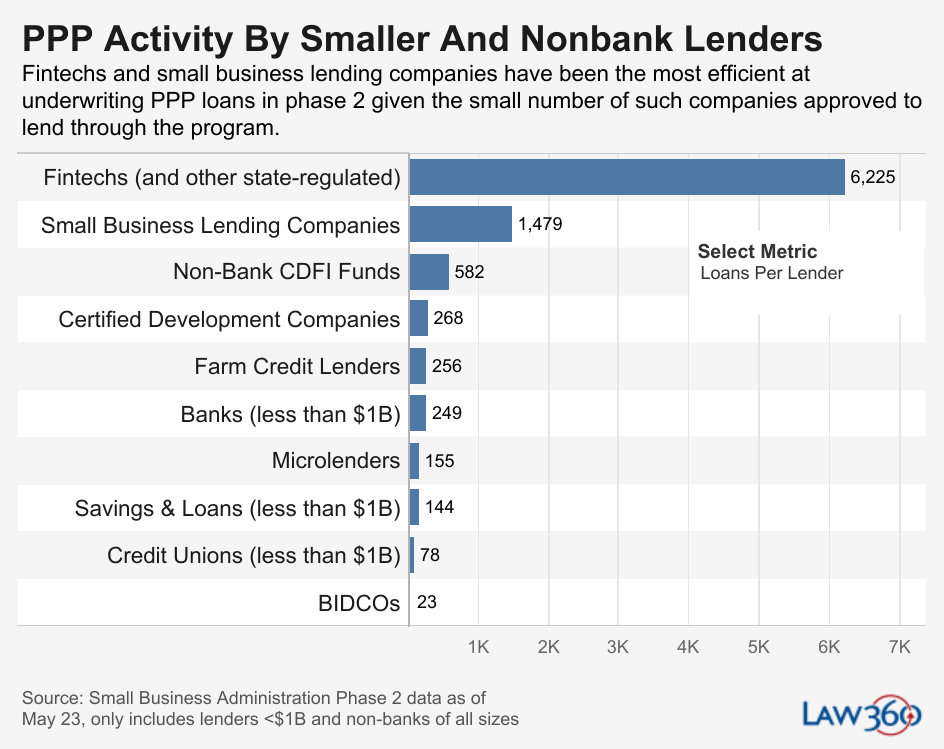 
Various types of lenders have been approved by the SBA to participate in the PPP program, including state-regulated fintech companies, small business lending companies, microlenders and credit unions.

In PPP Phase 2, the 19 approved fintech companies and state-regulated lenders have been among the most efficient at underwriting PPP loans, averaging more than 4,500 loans per lender. The fintech companies approved to lend through PPP include the high-flying PayPal, Intuit and Square. By the time the first fintech company was approved as an SBA lender for PPP on April 10, PPP Phase 1 was well on its way, and it was unclear whether fintech companies were able to have much impact in that initial phase.

Update: This story was updated on June 16 with newly released PPP data from the SBA.