Law360 (April 16, 2020, 12:33 PM EDT) -- The Small Business Administration announced Thursday that borrowers have fully claimed the nearly $350 billion Congress authorized for the Paycheck Protection Program, which offers forgivable loans to companies with fewer than 500 employees that keep paying workers during the pandemic, as lawmakers failed to reach a deal for more funding. 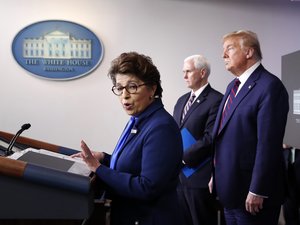 SBA head Jovita Carranza speaks at the White House on April 2. The agency said Thursday that money for the Paycheck Protection Program has been exhausted, as political leaders tangle over the details of adding funding. (AP)

"The SBA is currently unable to accept new applications for the Paycheck Protection Program based on available appropriations funding," an agency spokeswoman said at about 10:30 a.m. Thursday. "Similarly, we are unable to enroll new PPP lenders at this time."

"All PPP funds are exhausted," the agency said around noon, noting that over 1.6 million loans have been approved through nearly 5,000 lenders since April 3.

Although both political parties agree the program should get more funding than was included in the massive CARES Act relief package last month, political leaders have been tangling over the details. Last week, Republicans sought to simply add another $250 billion while Democrats demanded changes to improve access for business owners without established banking relationships, along with billions more for hospitals and state and local governments.

As the government reported another 5 million new unemployment claims — for a total of 22 million in just four weeks — negotiations continued Thursday between congressional Democrats and Treasury Secretary Steven Mnuchin as the parties tried to blame each other for the stalemate.

"Democrats have spent days blocking emergency funding for Americans' paychecks and now the bipartisan program has run dry," Senate Majority Leader Mitch McConnell, R-Ky., and House Minority Leader Kevin McCarthy, R-Calif., said in a joint statement late Wednesday. "This did not have to happen. Republicans have been sounding the alarm for more than a week. ... The cost of continued Democratic obstruction will be pink slips and shuttered businesses."

"We want it to work for everyone," Pelosi said on CNN on Wednesday. "What we were finding out, in just even the first hours of it, was that it was not working for the, shall we say, underbanked. ... Why would they want to cut that whole layer of people, mostly women, minority-owned businesses, Native American, rural America, veterans, all participating in those initiatives? And so we're just saying we can't allow the hundreds of billions of dollars being spent to fight the horror of the coronavirus and the impact on our economy to further harden the disparity, the lack of access to credit for so many in the small business community."

McConnell took to the Senate floor Thursday afternoon for a five-minute pro forma session without any legislative action, chiding Democrats for their opposition to a "clean" funding proposal. With no action in the upper chamber, Congress cannot pass a bill until next week at the earliest. The majority leader said the Senate would continue to hold pro forma sessions, despite President Donald Trump's threat the previous evening to adjourn Congress so he can make recess appointments.

"Five million more Americans lost their jobs just last week," McConnell said. "It is surreal to see Democratic leaders treat support for workers and small businesses as something they need to be goaded into supporting."

On a conference call with reporters Thursday, Pelosi tried to reframe the stalemate as a result of Republican intransigence.

"The need for hospitals and state and local is urgent now," she said. "We all know we want to help small businesses. Why would you turn your back on the hospitals?"

The Paycheck Protection Program guarantees private two-year loans of up to $10 million, at a 1% interest rate, to cover payroll costs, health care benefits, mortgage interest payments, rent and more. The loans will be forgiven if businesses — including small law firms — keep their end of the deal by retaining employees on payroll through the crisis.

Even as they approve billions in loans since the program launched April 3, lenders face unanswered questions about "know your customer" requirements, the secondaries market, loan forgiveness reporting and liquidity. Fintech companies were approved as lenders just last Friday.

And a Maryland federal judge on Monday refused to block Bank of America's "gating" policy that only allows applications from small-business checking customers that either are already borrowers at the bank or aren't borrowers at any other bank. An appeal is headed to the Fourth Circuit.