Law360 (May 27, 2020, 7:19 PM EDT) -- The COVID-19 pandemic has highlighted the crucial role that self-employed workers play in providing hailed rides, child care and other on-demand services, but it has also revived longstanding questions about underreported income and the needs of independent contractors traditionally excluded from federal unemployment benefits. 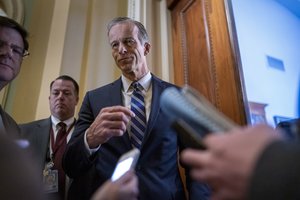 Sen. John Thune, R-S.D., the chairman of a Finance subcommittee with taxation oversight, has called for streamlining tax requirements to ensure that self-employed workers send accurate data to the IRS. (AP)

Members of both congressional tax-writing committees are taking a fresh look at proposals to tighten tax reporting requirements for self-employed workers to ensure they pay taxes owed and receive benefits promised by the Coronavirus Aid, Relief and Economic Security Act

, or CARES Act, enacted in March.

The law provided jobless aid for the first time to self-employed workers, including $600 in extra weekly benefits expiring July 31. It also allowed access to Paycheck Protection Program loans and a deferral of some 2020 payroll taxes, with two annual payments due in 2021 and 2022.

Both parties backed these temporary measures for self-employed workers, but they have disagreed about the timing of additional aid and whether it should be combined with new tax reporting mandates and other requirements in pandemic response legislation. Senate Majority Whip John Thune, R-S.D., and other members of both tax-writing panels have called for an examination of accountability measures to ensure accurate tax filings and to cement fair access to any additional pandemic-related benefits for such workers.

"Moving forward, I would like to explore ways the gig economy may have changed as a result of this crisis," Thune told Law360, referring to workers who generally provide on-demand services through intermediary platforms such as Uber or Airbnb.

As chairman of the Senate Finance Committee's Taxation and IRS Oversight Subcommittee, Thune has called for streamlining tax requirements to ensure that self-employed workers send accurate data to the Internal Revenue Service, pay all taxes owed and qualify for pandemic relief. Traditionally, self-employed workers have been required to pay both the employer and employee's shares of Social Security payroll taxes. But they have not been eligible for jobless aid, since they do not pay Federal Unemployment Tax Act

With an eye to ensuring accurate reporting of income and payroll tax data, Thune has promoted a plan, contained in S. 700, to require distribution of either a Form 1099-K or Form 1099-MISC to self-employed workers when their earnings exceed $1,000, instead of the current 1099-K threshold of $20,000 in earnings and 200 transactions under a 2008 law

The 1099-K is used to report payment card and third-party transactions, while the 1099-MISC is a catchall form for miscellaneous income.

Thune's proposal would also require an online platform to deduct 5% in withholding taxes from a self-employed worker's first $20,000 in payments, and clear the way for contracts stating that self-employed workers meet certain standards and are not employees.

In the House, Rep. Tom Rice, R-S.C., a Ways and Means Committee member and former accountant and tax lawyer, said he was trying to build support on the panel for the House version of the Thune bill, H.R. 1625.

"If this was in place, it would make it easier for gig workers," Rice told Law360. "If we had more of them, the economy could bounce back even more quickly."

Rep. Steve Chabot, R-Ohio, has made the case for advancing his own proposal, H.R. 593, for creating a single earnings threshold of $1,500 for a company to send out a Form 1099-K and Form 1099-MISC to a self-employed worker as part of a pandemic response bill.

"We should include that. They are a legitimate part of the economy," Chabot said.

Both Rice and Chabot told Law360 they thought there were good prospects for building bipartisan support to address tax-reporting problems. A 2019 Treasury Inspector General for Tax Administration study said corporate decisions to distribute Form 1099-K to workers with $20,000 in earnings — instead of using Form 1099-MISC for workers with more than $600 in earnings under a 1954 law

— was a factor in self-employed workers' underpayment of taxes, representing more than 10% of the nation's overall $381 billion tax gap.

For their part, some Democrats have voiced interest in streamlining tax reporting thresholds but also stressed a push to expand pandemic-related benefits for self-employed workers.

Rep. Dan Kildee, D-Mich., House chief deputy whip and a Ways and Means member, said he and other Democrats would be open to tighter tax-reporting requirements in a broader agreement to deliver more jobless aid and other benefits to self-employed workers.

"If the effect would be that more people would qualify for expanded unemployment benefits, I would be interested in that," Kildee said, referring to a unified information reporting standard.

For now, Senate Republicans have blocked the House-passed Health and Economic Recovery Omnibus Emergency Solutions Act, or Heroes Act, H.R. 6800, which includes more economic impact payments, a six-month extension of expanded jobless aid and expanded tax relief for families with children. GOP senators have vowed to develop an alternative focused on business incentives and a shield against liability lawsuits related to the outbreak of COVID-19, the respiratory disease caused by the novel coronavirus.

"We support efforts for consistent requirements across states and are eager to engage with policymakers on all issues that impact our community," a spokeswoman for Lyft said in an email.

An Airbnb spokesman said in an email that the company "supports Sen. Thune's efforts to make it as easy as possible for hosts using our platform to pay all the taxes they owe."

An Uber spokesman was not immediately available to comment on Thune's plan.

Joe Kennedy, a senior fellow at the nonpartisan Information Technology and Innovation Foundation, a nonprofit research group, said Thune's bill might appeal to some businesses as a way to avert a patchwork of state standards.

But Kildee and other Democrats have pushed back against federal classification rules for self-employed workers, arguing for leeway to allow companies to treat them as employees and offer benefit plans.

In light of such concerns, Caroline Bruckner, a tax professor at the American University Kogod School of Business, said lawmakers might focus on trying to set a single earnings threshold for information reporting in order to ensure online platforms are "prompting workers to properly report income and pay taxes on it, to help these workers avoid potential audit and penalty exposure."

"You don't have to resolve outstanding labor issues about this workforce at the same time," Bruckner told Law360.

Bruckner said action taken by some states to tighten information reporting requirements could increase pressure on Congress to follow suit. For example, Massachusetts and Vermont now require a 1099-K to be issued when a self-employed worker earns at least $600, and other states have established their own thresholds.

"What you want is a clear rule," Bruckner said.