Law360 (October 22, 2020, 6:14 PM EDT) -- A forthcoming U.S. Patent and Trademark Office report will show that patent applications involving the use of artificial intelligence have skyrocketed, the agency's director said Thursday as part of a discussion that also delved into pandemic woes and the fate of the covered business method review program.

In a conversation at the American Intellectual Property Law Association's virtual annual meeting, USPTO Director Andrei Iancu said the agency will soon be releasing a report that, fittingly, used AI technology to evaluate how AI is being used in patents. He teased one finding: that between 2002 and 2018, the number of applications involving AI technology more than doubled. 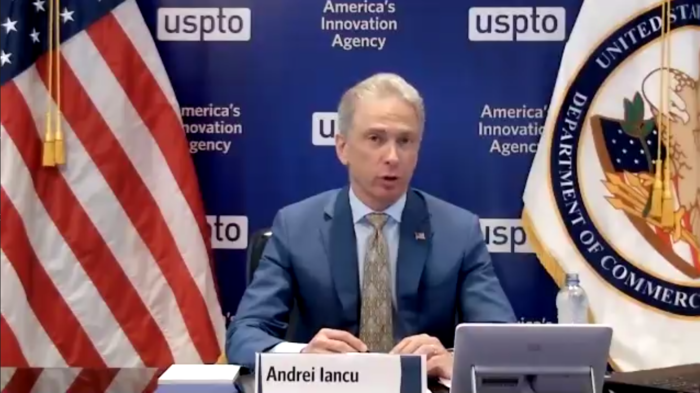 The new AI report is in addition to one released by the agency Oct. 6, which concluded that the current intellectual property laws are sufficient to handle AI.

"We are not at the point yet where the machine truly is in a singularity situation where they create themselves, they train themselves, they decide what to do and what to invent and completely operate autonomously," Iancu said. "If that's not the case, then machines are still just a tool, a very advanced tool, but still just a tool for human use."

He said the agency is still watching for further developments that may shift thinking, and particularly focusing on questions like who would own patents created by machines, how ordinary skill in the art would be evaluated and what is enablement in a machine-learning setting.

To close out the AI discussion, Iancu said they're hoping to launch an AI program in 2021 that will help classify patent applications as they're filed.

"Using AI tools for an office of our size is no longer a nice thing to have, I think it's a must-have, and we're making great progress there," he said.

Iancu said that in the fiscal year that ended in September, there were 0.7% more patent applications than the year before. The agency had planned for a 2.5% increase before the pandemic made things take a turn, he said. However, while filings from U.S. companies were down 1.5%, Chinese companies went up 19.3%, and South Korean companies were also up "significantly," he said.

The director added that trademark filings had a sharp drop in the beginning of the pandemic, but that they've had a steep bounce back.

"We finished the fiscal year at an all-time high of trademark filings, up 9.5%, well over projections," he said. "We don't know the reasoning behind it, but at a minimum it suggests some level of optimism about economic performance."

Iancu said that while he expects patent filings to stay in a decline for the next few months, he's curious if they'll follow trademark filings with a dramatic uptick.

In the conversation with AIPLA president and Foley Hoag LLP partner Barbara Fiacco, Iancu also seemed sure that the CBM program was unlikely to be revived after its September expiration. He noted that those trying to save it waited until the deadline was nearing, and that few used the program to start with.

Any push to revive the program, which had allowed challenges to financial products and services with invalidity arguments that can't be used in inter partes reviews, would have to include a study by the agency, Iancu said. He noted that the cost of maintaining the program was "significant" and that the invalidity arguments that can't be raised in IPRs, like ones over enablement or patent eligibility, can be brought in a post-grant review.

Fiacco also asked Iancu about the the continuing legal education credits that members of the patent bar may report on biennial registration statements required starting in March 2022. Iancu stressed that the five CLE credits for patent practice and procedure and one credit for ethics aren't mandatory, and that the agency is still looking for feedback about what will count as CLE.

The agency is accepting feedback on CLE until Jan. 7.

Iancu was more tight-lipped when responding to a question about the U.S. Supreme Court's decision to hear the Arthrex litigation, questioning whether Patent Trial and Appeal Board judges were properly appointed. The agency is a party in the case.

"We're watching it closely," he said, adding that they're "preparing for all possible outcomes in the meantime."