By Christopher Crosby
Law360 is providing free access to its coronavirus coverage to make sure all members of the legal community have accurate information in this time of uncertainty and change. Use the form below to sign up for any of our weekly newsletters. Signing up for any of our section newsletters will opt you in to the weekly Coronavirus briefing.


Law360, London (April 21, 2020, 5:48 PM BST) -- A British judge has delayed the start of a legal fight, set to decide if the world's largest mining company can be sued in England for $5 billion over the collapse of a dam in Brazil, due to travel restrictions imposed to halt the coronavirus pandemic. 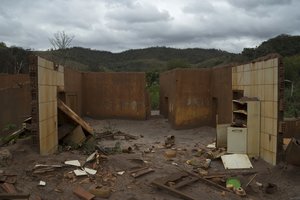 This home in Paracatu, Brazil, was destroyed after the 2015 dam failure that unleashed millions of cubic meters of waste material and toxic mud. A British judge has delayed a related legal fight, citing coronavirus-related travel restrictions. (AP)

BHP Group PLC's efforts to stay the lawsuit in the U.K. will have to wait until late July after the British and Brazilian governments imposed lockdowns hindering the company's lawyers and experts from traveling to review the evidence, Judge Stephen Eyre QC said Monday.

The company has filed a motion to halt the proceedings on jurisdictional grounds over concerns they overlap with litigation in Brazil, where BHP faces massive claims for damages and reparation.

Though the judge pushed back arguments over jurisdiction, he refused BHP's request to delay the case until the fall, saying he wanted to avoid a long hiatus as there is no guarantee international travel will have improved.

"The most that can be said is that there is some scope for believing or hoping that the prospects of having an in-person hearing with travel between England and Australia being possible are greater if the hearing is in the autumn than if it is in July," Judge Eyre said. "However, matters cannot be put higher than that particularly as at least some commentators suggest there are likely to be waves of infection."

The British-Australian company is being sued by more than 200,000 Brazilians, companies and local towns following the collapse of a dam at a mine in 2015 that killed more than a dozen and caused the country's worst ever economic disaster.

The claim, thought to be one of the largest in the U.K.'s history, accuses the company of taking no action to stop the dam's collapse at the Samarco iron ore mine, despite knowing about the risks. Samarco is owned by BHP and the Brazilian company Vale.

The dam failure unleashed millions of cubic meters of waste material and toxic mud that destroyed one village and polluted a nearby river. The sludge traveled hundreds of miles to the Atlantic Ocean, killing wildlife and tainting local drinking water, according to court documents.

More than a dozen employees of the miner were charged with crimes in Brazil, and the company itself has faced a barrage of civil litigation and fines in the country over allegations that it failed to act on warnings issued by independent experts.

The company agreed to pay $50 million cash to end a lawsuit in New York by investors who accused the company of lying about safety standards.

In the U.K. litigation, lawyers pushing the claim against the company complained that BHP had "exaggerated" the logistical difficulties caused by the pandemic.

Though the companies' experts said they faced technological challenges and slow internet speeds hampering their analysis of the evidence, that didn't stop them from posting on Instagram and live-streaming university lectures, the claimants' lawyers said.

A representative for BHP and a lawyer for the claimants did not immediately return requests for comment Tuesday.

The claimants are represented by Nicholas Harrison and Jonathan McDonagh of Serle Court, instructed by SPG Law.

BHP is represented by Charles Gibson QC of Henderson Chambers and Nicholas Sloboda and Veena Srirangam of One Essex Court, instructed by Slaughter and May.