Law360 (September 25, 2020, 12:14 PM EDT) -- Two top officials at a Massachusetts soldiers' home were criminally charged Friday with negligence for their role in a COVID-19 outbreak that killed 76 veterans, in what Attorney General Maura Healey called the first criminal case in the country against nursing home operators related to the pandemic. 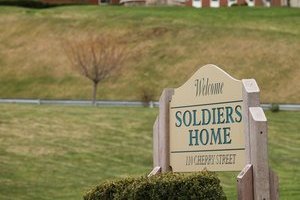 Two top officials at the Holyoke Soldiers' Home were charged with negligence Friday for their role in a COVID-19 outbreak that killed 76 veterans. (Photo by Matthew Cavanaugh/Getty Images)

Bennett Walsh, 50, the superintendent of the Soldiers' Home in Holyoke, and Dr. David Clinton, 71, the facility's former medical director, were each charged with wantonly or recklessly permitting bodily injury or abuse to the residents.

"They risked their lives from the beaches of Normandy to some of the jungles of Vietnam, and to know that they died under the most horrific circumstance is truly shocking," Healey said at a Friday morning press conference. "We believe this is the first criminal case in the country brought against those in nursing homes during the COVID-19 pandemic."

Healey's investigation, launched in April 2020, found that staffing shortages led to a "tragic and deadly" decision to consolidate two dementia units, resulting in symptomatic and confirmed COVID-19-positive residents being placed within feet of other veterans at the facility. The charges place the responsibility for that decision with Walsh and Clinton.

"To think about this now, knowing how contagious and deadly this virus is and continues to be, is most disturbing," Healey said. "This never should have happened from an infection control standpoint."

When the facility combined the dementia units, residents who had tested positive or were symptomatic were housed six to a room in dormitory-style rooms typically used for four residents, Healey said. Meanwhile, the veterans thought to be symptomatic were kept in a dining room adjacent to where COVID-19 positive residents were held.

Tracy Miner of Miner Orkand Siddall LLP said it's unfortunate that Healey is blaming the virus' toll on Walsh, who relied on medical professionals in his decision-making to do his best for the veterans' home.

"The attorney general should not be scapegoating Mr. Walsh, who was on the front lines trying his best to do whatever he could to help the veterans of the Holyoke Soldiers' Home, including asking for help from state officials and the National Guard, which arrived much too late," Miner said.

Representatives for Clinton were not immediately available for comment Friday.

While these are the first criminal charges stemming from the Holyoke Soldiers' Home outbreak, the incident has already spawned its fair share of litigation.

In July, the estate of a Korean War veteran who died due to COVID-19 filed a class action claiming the state and the operators of the long-term care facility failed to ensure the safety of elderly veterans who were unable to care for themselves.

Following a scathing independent report into the outbreak by McDermott Will & Emery LLP partner Mark Pearlstein and Gov. Charlie Baker's decision to fire Walsh, a state court judge this week invalidated the termination because the law gives the facility's board of trustees — not the governor — responsibility for appointing and terminating its superintendent.

Healey on Friday said Pearlstein's report — which highlighted "baffling" decisions made by the home's leadership — was "enlightening" regarding the conduct that led to the lives lost at the nursing home.

Healey said her office is pursuing investigations at multiple other homes across the state.

Walsh and Clinton will be arraigned at Hampden Superior Court at a later date.

Update: This story has been updated with more details, counsel information for the parties, and with comments from counsel for Walsh.